A baker’s dozen is synonymous with the number 13, but a Buckeye’s dozen consists of the number 12. Last week, the Ohio State Buckeyes dominated the NFL Draft with 12 draft selections. While they didn’t tie or break their own record of 14 draft picks set in 2004, it was an impressive accomplishment.

What makes the achievement so prodigious is that the 12 picks were all selected by the end of the fourth round, which is the most in the common era since 1967. As head coach Urban Meyer was seen smiling from ear to ear while the draft was going on, this is yet another accomplishment to add to his list of accolades since coming to Columbus in 2012. All of the Buckeyes selected may not become perennial Pro Bowlers or even have extensive NFL careers, but it’s a great selling point to recruits who have aspirations of wearing scarlet and gray.

Let’s examine the former Buckeyes in their new NFL homes.

The San Diego Chargers surprisingly passed up on Jalen Ramsey from Florida State to grab the All-American defensive lineman. Bosa, who was arguably the best defensive player in the draft, has the ability to play in a 3-4 scheme despite the rumblings about it being a bad fit for him.

Bosa will play under defensive coordinator John Pagano, who is an understudy to Wade Phillips. Pagano,believes that the No. 3 overall pick is a complete player who can help the Chargers win, and with that assumption, he is right. While he may not be the next J.J. Watt, the sky is the limit for the rookie. He is an amazing pass rusher and run stopper who is athletic enough to play some coverage. As the doubters are in line to call Bosa a potential bust, he will just shrug his way toward success. 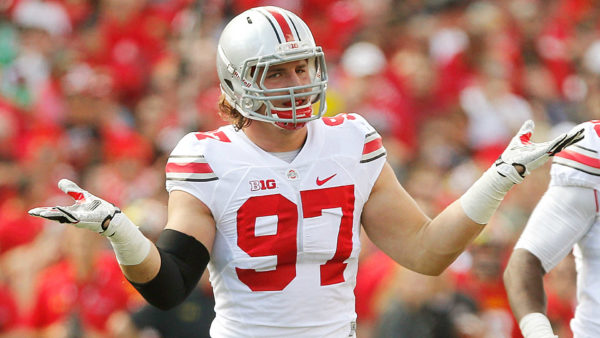 The crop top may have stole the headlines, but let’s not forget the Cowboys landed a gem. As seen with Todd Gurley in last year’s draft, it’s hard to pass on a top-tier running back even though the value of the position has squandered. Zeke will team up with Alfred Morris in the backfield to form a potent one-two punch to help Tony Romo extend his career a few years. Marred by injuries over the past few seasons, Romo needs a solid running game to help give the offense balance, and with the addition of Elliott, that will help immensely.

Although the Cowboys could have gone with a pick on the defensive side of the ball, adding Elliott to the mix helps the defense by keeping it off the field. Ironically, Elliott had his best game of his college career against Oregon in Cowboys Stadium in the 2015 National Title game, so he already has a fondness to his new home. While he may not rush for 246 yards and four touchdowns in every home game as he did against the Ducks, he will provide stability at the running back position for years to come.

Oh yeah, and how many running backs can you name who have their own songs?

Although the NFL Draft has been over for about a week, the booing is still ringing throughout the Big Apple. The Giants have many holes on the defensive side of the ball, so they reached and grabbed the All-Big Ten cornerback to fill the need in the defensive backfield. Apple is a raw but talented prospect who will face some challenges early due to his physical play. He isn’t as brash or as flashy as other cornerbacks, but he gets the job done.

To be honest, Apple’s practices may be harder than the games lining up against the leader of the frosted blond fauxhawk coalition in Odell Beckham Jr. If he fares well in practice against the All-Pro wide receiver, then the games should be an easy transition.

Decker will now play his pro ball in the state up north, and he will have the tough task of keeping Matthew Stafford upright. Stafford was sacked a whopping 44 times this past season and was under duress each time he stepped back to pass. Decker will provide the leadership and winning attitude to a football team that has only had two playoff appearances in the past 16 years.

Lee was once a skinny quarterback coming out of high school turned NFL linebacker. That is a testament to the notion that a lot can happen over the course of three years. The fellow that they call “Manimal” is expected to make an immediate impact under the tutelage of Todd Bowles.

Lee, who wowed scouts at the NFL combine running in the 4.4 range in the 40-yard dash, will look to add his speed and versatility to an already potent defense. The Jets get a linebacker who can play three downs, and he wants to assume the duties of stopping that No.87 who plays in New England — OK, I am not crazy enough to believe that he can, but if he believes that he can do it, the Jets should at least be impressed with his confidence.

Thomas will always be introduced as Keyshawn Johnson’s nephew, but people will soon realize why he goes by @CantGuardMike on Twitter. Thomas looks to fill the void as the possession wide receiver for the New Orleans Saints now that Marques Colston is no longer on the roster.

Standing at 6’3″ and weighing at 212 pounds, Thomas has the size to make an immediate impact despite not being a first-round pick. He isn’t a blazer when it comes to speed, but he has enough speed to create separation — just ask Michigan State.

With the combination of size, nifty footwork, hands and a glimmer of speed, the Saints may have unearthed a diamond in the rough who can help their team for years to come.

Bell will join his Buckeye brethren Mike Thomas in the Big Easy. The Saints have been horrendous in the secondary over the past few seasons, and Bell will look to help the unit gain some stability.

It’s hard to find any true weaknesses in Bell’s game, and that’s why it was surprising to see the All-American fall out of the first round. The Saints get a player who has the ability and instincts to have an impact in both the run and passing game. With his football savvy coupled with his physical skills, Bell has the chance of being a starter for the Saints at some point during his rookie season.

It’s no surprise that Rex Ryan went with a defensive lineman in the draft as he looks to add depth on the defensive side of the ball. The former Buckeye fell down draft boards due to an off-the-field issue, but the team drafted a first-round talent in the third round, which has been perceived as a steal by many draft experts.

Washington will provide versatility as a five-technique defensive end and a three-technique defensive tackle. Having the ability to get to the quarterback and stopping the run, Washington is a shoe-in to play early and often. With the off-the-field baggage behind him, he will look to get back to playing football at a high level. Bills fans will soon find out that Mr. Washington will be a solid player for years to come.

The Braxton Miller highlight show will now take place at Reliant Stadium in Houston. Head coach Bill O’Brien knows a thing or two about Miller, as he faced the quarterback in his days as the head coach of the Penn State Nittany Lions. The former two-time Big Ten Player of the Year made the switch from quarterback to wide receiver, and in just one season at the WR position, Miller was good enough to be drafted in the third round.

While he is still learning the nuances of the position, his athletic ability, competitive drive and football knowledge will allow Miller to step in to make an immediate impact if he is used right. Houston Texans WR DeAndre Hopkins appeared happy about seeing Miller come to the city of screw.

It’s amazing how far Braxton has come. After dealing with injuries and controversy about potentially leaving OSU, he stuck it out and landed in an ideal situation with the Texans. Miller is a highlight waiting to happen, therefore the fans in Houston will hear a lot of “da-da-da, da-da-da” on the worldwide leader involving Miller.

The Seattle Seahawks add a talented tight end who can help them in the running and passing game. While he may not be an immediate starter, he can develop into that role over time. Pro Bowler Jimmy Graham had a rough initial season with the Seahawks, and adding Vannett to the mix provides insurance at TE.

Vannett was underutilized at OSU, but he made the most of his opportunities. In Seattle’s offense, the tight end plays a vital role, as the position is expected to run block and have the ability to be a solid receiving threat. If Vannett turns out to be a big-play guy at some point, Seattle shouldn’t be surprised, because the Seahawks have a proclivity for drafting well.

Years ago, linebackers were expected to be 6’4″ and weigh around 250 pounds. Now that the game has gone vertical with the passing attack taking over, linebackers are slender and oftentimes built like wide receivers. Well, Josh Perry is a throwback of sorts when it comes to playing the LB position.

Standing at 6’4″ and weighing 252lbs, Perry will add the physicality to a defense that was finesse last season. He’s a beast on the field, and off the field, he’s just as impressive. San Diego has a rookie who is mature beyond his years, and despite being a fourth-round draft selection, he has the skill and will to be a mainstay for the Chargers defense.

Last year, Cardale Jones was expected to declare for the 2015 NFL Draft, but he decided to go back to school. While he may have lost out on millions of dollars after his historic three-game performance in the Big Ten Championship, Sugar Bowl and National Championship, he may have landed in a good situation with the Bills.

Jones will be expected to hold the clipboard for a few years as he gets his feet wet as an NFL QB. Cardale’s physical tools are astounding, and his cerebral part of the game is underrated, but there are some things — such as maturity, accuracy and playing in a pro-style offense — that he needs to work on, which is why it would suit Jones well if he sat for a few years. Rex Ryan hasn’t had the best track record with quarterbacks, but offensive coordinator Greg Roman has. With Jones sitting and learning under Roman for a few years, the sky is the limit of how good he can be. Whether it’s being a backup QB or becoming a starter at some point, anything is a success story for the dude they call 12.

One Reply to “A Buckeye’s Dozen: Ohio State Dominated the 2016 NFL Draft” 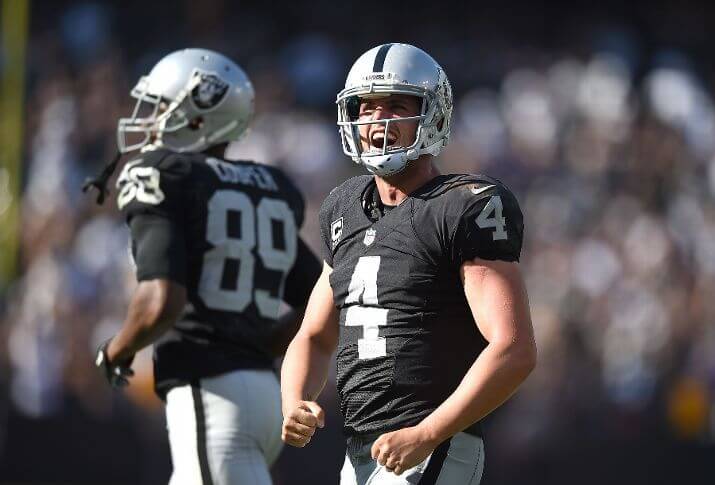