Here’s something that two years ago felt like it would never be written again: The Oakland Raiders are good at football.

Now, that isn’t to say the Raiders are going to head up 880 in February and win Super Bowl 50. They’ve got some work to do in the second half of the season to even make the playoffs.

I hesitate to say that Raiders fans finally have something to cheer about, because Raiders fans have always been there talking smack and dressing up in costumes and cheering their face paint off. But there’s finally some promise that this team is going to be good for a while.

The tendency is to write them off right away because, well, they’re the Oakland Raiders. They’re a punch line. Or at least they have been for most of the last two decades. If you’re going to continue to try and use them as a punch line, proceed with caution. This team is different from top to bottom, and it's right on the bubble of contending.

Jack Del Rio isn’t Bill Belichick, but he’s most certainly NOT Lane Kiffin. He’s an established coach in the NFL with recent playoff appearances under his belt. That’s a good thing for a young team that’s building from essentially scratch.

When teams are building from scratch, it is vital to do so through the draft, and general manager Reggie McKenzie’s last few drafts have yielded some exceptional talent.

Thanks to McKenzie, the Raiders are a burgeoning juggernaut on the offensive side of the ball. In the last three drafts, he's found Latavius Murray (2013), Derek Carr (2014), Gabe Jackson (2014) and Amari Cooper (2015) — all currently productive starters for Oakland.

Murray is currently 11th in the league in rushing and averaging 4.8 yards per carry.

Carr is improving rapidly and well on his way to blowing past all his rookie marks in his sophomore campaign. Through eight games, he’s completing 63.7 percent of his passes for 2094 yards, 19 TDs and just 4 INTs. 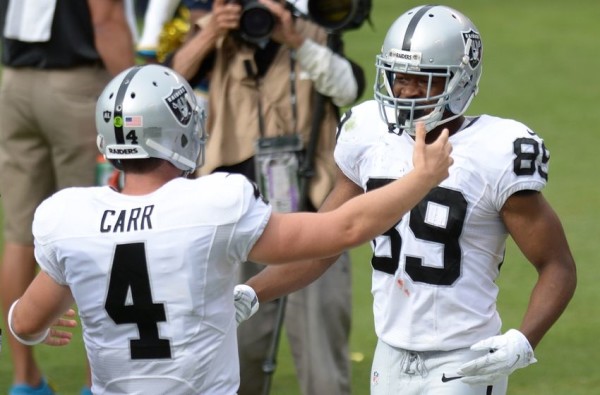 That's not to mention Cooper, who is in the conversation for Offensive Rookie of the Year with 45 catches for 653 yards and 4 touchdowns at the halfway point.

If you haven’t noticed yet, Cooper is good. Like, really good. Like, this guy is going to be in Canton someday good. I don’t care that Kevin White can exercise better than Cooper. Cooper is, and always was, the best wide receiver in his class.

LOOK AT THIS. LOOK AT IT.

The best part of all of this for fans of the Silver and Black? Murray is 25, Derek Carr is 24 and Amari Cooper is 21. Three potential perennial Pro Bowlers all well under 30. Neat!

The Raiders' offense has also been aided, somewhat ironically, by the signing of Michael Crabtree in free agency. In case you forgot, they passed on him for Darrius Heyward-Bey back in the 2009 draft.

Crabtree, after a fairly tumultuous tenure in San Francisco, is on pace for the best year of his career. He’s snagged 47 balls for 591 yards and five touchdowns through eight games in Oakland. Those five touchdowns are his most since 2012, when he hauled in nine.

Everything on the offensive side is pointing up for Oakland, and the team is probably ahead of schedule in that department. A season ago, the Raiders were 31st in the NFL in points scored. They currently rank 7th in that category. I’m no math whiz, but catapulting from bottom 2 in the league to top 10 is an absurd jump, and there’s no reason to believe they won’t continue getting better.

Where Oakland lacks, and what’s holding it back this season, is a less than stellar defensive unit. The defense held only one opponent (the Broncos) under 20 points all year, and it currently sits at 24th in points allowed. The Raiders are also giving up 315 yards per game through the air.

For what it’s worth, they were dead last in points allowed a season ago. So, while the defense hasn’t improved at the breakneck speed the offense has, it is still improving, which is the goal.

Khalil Mack, the team’s first-round selection in 2014 has a legitimate shot at being one of the best at his position (at 24, he’s another perennial Pro Bowler under 30).

Other than Mack, the young talent on the defensive side lacks a little bit. It makes sense, though, given the resources they’ve poured in to the last couple of drafts to bolster the offense.

With the offense seemingly figured out, don’t be surprised if the Raiders’ next couple drafts are spent solidifying that defense. Is there any reason to doubt that McKenzie and his staff will identify the right pieces? They’ve not swung and missed on a top draft pick yet, which is just another reason for optimism in the East Bay.

Oakland is not only on the right track, but it is hauling copious ass on it.

McKenzie had a titanic mess on his hands when he took over as the team’s GM. He’s finally cleaned most of that up and has commandeered a once perpetually sinking ship and turned it into one that is not only afloat, but rapidly gaining speed.

The Raiders have been on the brink before when they went 8-8 in 2010 and 2011 under Tom Cable and Hue Jackson. But most people laughed that off as a couple of fluke seasons. What’s happening in Oakland now is no fluke.

This team is being built to win long term. No more giant swings for the fences with insane overdrafts of players and rampant overspending in free agency. This is a measured and steady course the organization is taking to become a respectable franchise again. And it’s working.

They have a franchise quarterback, a workhorse running back and a budding superstar wide receiver. They have an elite pass-rushing outside linebacker (two if you count Aldon Smith). They’ve got veteran presences in Charles Woodson, Justin Tuck and Crabtree. They’re a piece or two on defense away from contending for a Super Bowl.

Oakland may not make the playoffs this year, but don’t write the Raiders off going forward. Watch them. Learn about them. Enjoy them. They’re a lot of fun to watch, and chances are they’re going to be beating your team sometime in the not so distant future.

This team is for real and trending in all the right directions just in time to give the fans in Los Angeles something to cheer for.