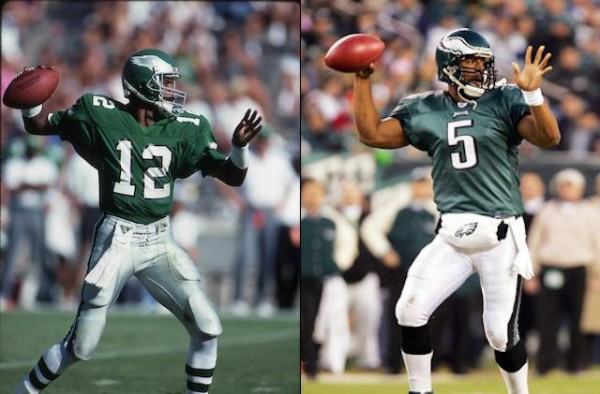 You’ve seen recent reports that the Philadelphia Eagles are considering a permanent return to the kelly green look in the near future. Though there are hard-to-understand complications from the NFL in relation to any change, Eagles management has opened up conversations with the league office in making the switch from the edgier, darker look that has actually seen the brightest days of the franchise since the late 1940s.

It’s safe to assume that this decision is buoyed by three factors. The first is the team wants the revenue stream in selling all new merchandise when the market could potentially be tapped out with the current look (granted if their NFL post-season odds move even further in their favor it won't matter). The second is the jersey-as-good-luck-charm, as the Eagles would join the plethora of teams throughout sports that made a change and actually made their league's championship in short order (last year’s Seattle Seahawks being the latest example, three years after their Nike-fueled overhaul). The third is there’s an apparent clamor among the fan base for a return to the “classics.”

The cynic rightfully looks at uniform changes as a way to generate revenue when there’s not a whole lot to get excited about when it comes to the product or when the team just wants to bleed every dime out of fans (all three of Florida’s NFL teams, the San Diego Padres, pretty much every soccer/football team in existence).

The idea of a good-luck charm may be an expensive superstition, but one can blame the Denver Broncos for that with their dramatic overhaul in 1997 that preceded back-to-back Super Bowl championships. It’s not a new phenomenon, as the Minnesota Twins won the World Series in 1987 after a change, while more recently, the rechristened Tampa Bay Rays made their lone Fall Classic appearance in 2008.

However, here’s to hoping that the Eagles aren’t succumbing to a return to kelly green for the sake of modernized nostalgia.

*puts on poncho for the tomatoes thrown from South Philly*

It’s reminiscent of not too long ago when our EIC briefly lamented the lack of pinstripes when the resurrected Charlotte Hornets released their new threads earlier this summer. It’s perfectly understandable to want to completely bring 1989 back when you consider the trendsetting style the original Hornets wore — a smart combination of a baseball-like design with the boldness of color we hadn’t really seen pro athletes wear before. The Hornets inspired teams all over sports to change their look because the kids loved seeing anything besides the blue or red that seemingly every other team featured.

It did help that the on-court product flourished over time.

Yet, with all due respect to the past, what’s really wrong with forging a new identity? Or better yet, who says going back in time is always the right course?

When franchises decide to change their identities, there’s always a reason besides hawking some new threads. They see that the previous logos and/or uniforms left something to the imagination. It could be something as simple as wanting to have a stronger connection to a city's or region’s history. It could be that the uniforms are a part of a new beginning in a new arena or city, as was the case for the Los Angeles Lakers moving to the Forum in 1967 or even the Nets moving to Brooklyn 45 years later. And like buying a new home and gutting the place, it could be trying to have a complete departure from the bizarre whims of previous owners, as was the case for Anaheim’s two pro sports teams in the Angels and Ducks.

So, if the luck changes for the better after the fact — championships won, fashion statements made beyond sports fans — maybe the newer look will endear itself to people who resisted before.

The Eagles may have not been trendsetters in the same vein as some aforementioned teams were when the midnight green debuted in 1996. Nor do they have the perpetual identity crisis that their neighbors in the 76ers have had since the incomparable Shawn Bradley era. However, they’ve had their longest period of sustained contention in the darker shade.

The potential return to kelly green should be considered well beyond a focus group featuring people who hadn’t burned their Jerome McDougle jerseys in effigy. And as Demetrius Bell says for SportsLogos.net, the uniforms of the Ron Jaworski and Randall Cunningham days weren’t exactly fashion templates.

However, what's being considered here isn't much different from what all of us face with our personal wardrobes. We toss clothes from our closets because what we inexplicably wore in high school doesn't work when you're a grown-up. Perhaps like some of us in those days, the Eagles were rummaging through their parents' photo albums and fell in love with the styles of the past. Bringing back some of that old style can actually work out quite well in modern times, but the Eagles built quite the history for close to 20 years under the cloak of midnight green. Hopefully, the future look — whatever it may be — respects the past while forging ahead.

5 Replies to “Not For Nostalgia's Sake: The Philadelphia Eagles And 2 Shades Of Green”