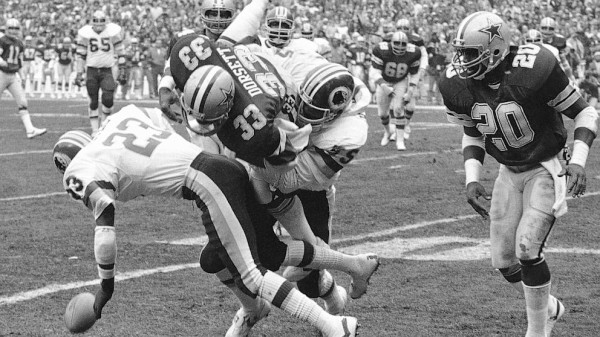 The NFL's $765 million settlement of concussion lawsuits is, on the surface, a monetary conclusion that will compensate a lot of former players and their families for physical damages that have arisen as a result of the game of football. Beyond that, it's just another reminder that the concussion issue in football remains without many answers. The most troubling aspect of all this is that the league that is both responsible and perhaps the only party involved that has the capacity and influence to address many questions related to this issue doesn't seem committed at all to do the heavy lifting to get those answers.

As detailed by Daniel Engber at Slate, as part of the deal with its plaintiffs, the NFL  is setting aside an additional $10 million for "research and education" of the issue, which again, on the surface, sounds like a hefty financial commitment until you realize just how much more financially it could and should be investing into a problem that isn't going away anytime soon.

To talk about the concussion problem in football is to open up the discussion that flows into many different directions. At the forefront is the safety issue with the players. It's taken high-profile cases like Junior Seau for a lot of people to start caring about the issue. If you want to understand the impact these injuries have on a player's life post-career, just bookmark and read this piece on George Visger. Because of the culture of the sport, and the tendency for players to proceed on the field even as they're risking life-altering injuries to the brain, it's not feasible to expect a solution to come from the players themselves. At the same time, coaches and general managers, and to an extent the owners of these teams, are running million-dollar operations in which investment in players and the success of their teams are crucial to the bottom line. So while it's not to say that their medical staffs are negligent in this regard — though some are — the front office and coaching staff don't operate in an environment where improving the safety of their players provides any positive reinforcement tied to what they're trying to achieve in the short term.

So, without the ability to trust the game and the people that participate in these games to police themselves and bring a solution, it circles back to the issue that this is something that the league has to fix. But to fix any problem, to even propose potential solutions, requires an understanding of those problems first.

As the sample size of former players who have suffered from chronic traumatic encephalopathy (CTE) continues to grow, there are people out there — like neuropathologist Dr. Ann McKee — devoting their time and resources to develop an understanding of how the game of football is ruining the lives of its participants. Admittedly, we're still very early in the research phase, but there would at least be some comfort to all of us — especially those suffering or the family members of players who have passed away from this — if we knew that the league was making a full commitment to admitting to and understanding the full extent of the concussion issue.

Of course, as with any off-the-field issue that has little to no direct impact to fans like myself, it's worthwhile to contemplate the question of why we should even care. The concussion issue of course is not limited to the sport of football only — hockey has been dealing with its own problems as well, to name one — and all of us are well aware of it at this point.

I won't be the one who grandstands and tells you that when the NFL season starts on Thursday, I'll be taking some sort of stance and boycotting the games because it is revolting to watch a game that's played for our entertainment while people are literally out there killing themselves in the process. Sports has that strange appeal where you're always able to separate the viewing pleasure of it from the consequences of that entertainment. And as serious as the concussion issue is, without the aforementioned direct impact, myself and many others will be able to maintain that separation.

But the question is for how long? Similar to what the league is doing in trying to putting band-aids on the situation and minimizing the true impact of the problem, we're also straddling that line of being aware but making ourselves ignorant to the problem as it is convenient to ourselves. There's a gap between the actual reality and the one that we're operating in, but that gap is closing. Maybe a little each day or just a tiny fraction as each season passes.

But there will come a time when we'll all have to deal with this head on, be it fans, players, coaches, general managers, owners and most of all the league. And once you start thinking about the concussion issue, you realize that the scope of it extends beyond just the NFL. The entire game of football needs a rethink, and that starts with children who are participating in this contact sport at a young age. I've seen Jonathan Hock's "Head Games" documentary, and it made me realize just how wide-ranging this problem is.

Soon, maybe not this year, or even this decade, we will uncover all the disturbing facts about how much the game of football is damaging the brains of those playing it. And when those answers come, we'll all operate on just one actual reality, where there will be no entertainment to be derived from the game of football as it is currently constituted.

You don't need to be an expert in CTE to realize that changes must be implemented so the game is safer for the players. I think that's a conclusion we can all agree on. But for now, the first step, the first of many steps, will require that we have a football league that's willing to put both feet in and take a deep dive into a problem that is destroying people's lives.

4 Replies to “The NFL's Concussion Settlement: A Problem That Remains Without Too Many Answers”