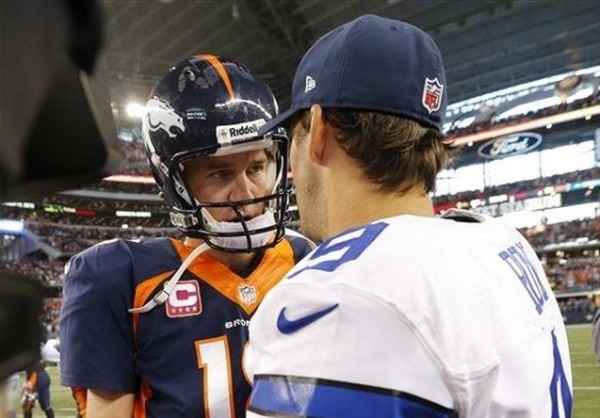 "Cowboys QB Tony Romo throws 506 yards in loss to Broncos" is probably the most Romo of all Romo headlines. Just 48 yards away from tying the all-time NFL record for passing yards in a game and having kept pace with Peyton Manning and the record-setting Broncos for four quarters, Romo got the ball back late in the fourth of a tie game, and almost true to form for an overdone narrative begging to move in another direction at this point, he threw a pick that led to the game-winning field goal for Denver.

I've written about Romo as the incomplete hero before, and despite the reputation, he's not this terrible choker that self-combusts on command.

As this in-depth piece from Cold Hard Football Facts points out, Romo and the Cowboys are actually far from that. But this is America's Team which is now America's Team by brand only, and a team that's been average to mediocre in a division that's been average to mediocre for awhile now. The franchise's history, or even Jerry Jones all by himself, invites a lot of schadenfreude towards the Cowboys and, by extension, their quarterback.

The moments like the one yesterday in the fourth quarter when Romo threw the interception can be frustrating and outweigh all the positives that the quarterback is able to bring to the team, like the fact that watching Romo and Dez Bryant in the red zone has been one of the personal highlights of this season or the fact that even at 2-3, the Cowboys are tied for first place in the division, average to mediocre competition notwithstanding.

And maybe because it's gone on for too long, or the numbers actually say otherwise, but it's probably correct to think that the Cowboys would be in a much worse place without their quarterback.

On Sunday, a lot of starting quarterbacks performed so terribly that Josh Freeman (who ended up signing with the Vikings, who of course were one of the teams that didn't play this week) became this imaginary savior to a lot of fan bases around the league. The notion of the grass is always greener is not just a saying; it's real. Freeman has not been a competent starting quarterback for almost a season's worth of games now, and yet, he seems like a viable alternative in so many places. Meanwhile, Romo can have an incredible season and still not change his perception at all.

He might not be what we want him to be, but Romo is a pretty good quarterback. In a strange way, his moments of failure that once defined him are now the ones that are making us stop and appreciate the positives.

Other Week 6 thoughts, or how much will I invest into Jaguars-Broncos next week: