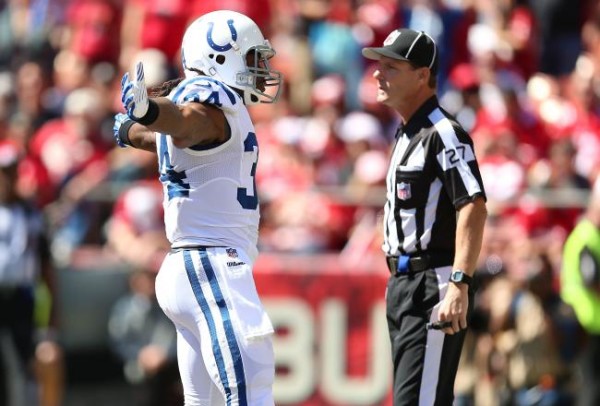 This is my fifth attempt at writing this column. In the first one, I tried to write about Trent Richardson. The second and third were attempts at ranking the teams while making a bunch of references to Breaking Bad. The fourth was an empty WordPress box. I then opened my e-mail to tell editor-in-chief and new SB Nation weekly columnist Eduardo "Eddie" Maisonet that I needed until Tuesday for this. But then I decided, maybe we can get through this by me just dropping a bunch of one-liners. You'll never know if this was better or worst than the other attempts.

• In the long run, everyone might benefit from the Trent Richardson trade, or so says Bill Barnwell.

• The trade really motivated Ahmad Bradshaw, and it might be time to readjust expectations for the Colts.

• The Bears are two games ahead of the Packers.

• The Saints are two games ahead of the Falcons.

• The Seahawks are two games ahead of the 49ers.

• Ron Rivera went for it at the goal line on fourth down and inches to go. The fact that this deserves its own one-liner is not a good sign.

• The ricin is for the Steelers' season.

• And per Andrew Bucholtz, the machine gun is for the Redskins' season.

• Read this piece on Aldon Smith and Jim Harbaugh's 2005 DUI.

• The Chiefs are my new favorite jersey in the league.

• Todd should have been a Lannister.

• Sorry, Breaking Bad is bleeding into these one-liners.

• I  just checked to see if Miami and Kansas City play each other this season, because that would be a great match-up, who knew.

• Your most deceptive 2-1 team: Houston and the New York Jets.

• The Brian Hoyer era will end with a trade to Jacksonville for their entire 2014 draft.

• Did you read about how Mike Holmgren offered the entire 2012 draft for Andrew Luck?

• The Sam Bradford era will be mostly forgettable.

• The Detroit Lions have too many talented running backs, what's going on again?

• Teams I have no idea what to make of after three weeks: Dallas, Detroit, Tennessee, Atlanta.

• If Chip Kelly doesn't put Freddie Mitchell on a flashcard before the end of the season, his jump to the pros will have meant nothing.

• I feel like I related to the Greg Schiano situation really well, and so should you, who ever gets along with their boss anyways?

• I watched the entire Bills-Jets game. Don't let any of the highlight shows try to fool you, that was the worst one-possession game ever.

• I'm not counting out the Giants or Redskins, because, first, like Jason Clinkscales keeps telling me on Twitter, it's September.

• And second, because it's the NFC East. That division doesn't do conclusions until Week 17.

• We need a nickname for Jordan Cameron.

• I like the Jaguars helmets. I think the problem is more they're a terrible team right now.

• The best part about the Chiefs' win on Thursday was Andy Reid vs. Sal Paolantonio.

• And finally, Adrian Peterson's daughter is out here hurting feelings

Did Alex forget anything? Let us know in the comments section!