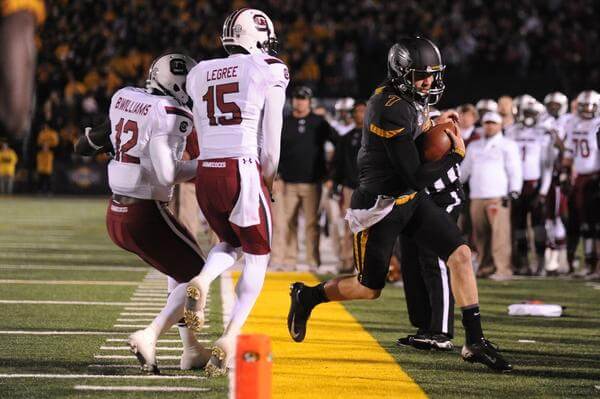 Expectations were very high for the South Carolina Gamecocks coming into the season. Many experts had picked them to be the outright winner of the SEC East division and contenders for a national championship. It sounded good in August, but after the drudging that took place at the hands of the Aggies of Texas A&M in the opening week, all that noise about contending for a national championship has all but been silenced.

The Missouri Tigers started the season off on fire. They handily won their first three contests but were taken to the shed last week at the hands of a very physical Indiana team. Now the Tigers are seeking redemption, and the Gamecocks just happen to be their first opponent after that defeat.

The Gamecocks rebounded after the week 1 debacle and defeated a very good and potent East Carolina football team that may have the best offense in the country. Then they won a close contests against Georgia and pulled away late to defeat a very promising Vanderbilt team.

Defensively this year, the Gamecocks have had many challenges. Facing Texas A&M, East Carolina and Georgia didn’t help their numbers any. All of those offenses are explosive and can put up a lot of points on any defense in the country. However, the Gamecocks have struggled to get off the field and are allowing just over 36 points per game.

Missouri, on the other hand, has baffled its opponents on the defensive end by only allowing a little over 20 points per contest. Missouri hasn’t faced any opponents like the Aggies, Pirates or Bulldogs so it’s safe to say that its defense hasn’t been tested.

The Tigers will get a test on Saturday, as the Gamecocks quarterback Dylan Thompson comes in blazing. He’s off to a great start to the season and has been firing on all cylinders. His primary targets Nick Jones and Pharoh Cooper have been electric, and they have been able to find the end zone a combined five times as well.

Supporting Thompson is a potent backfield duo of Mike Davis and Brandon Wilds. The two have combined for over 470 yards rushing and nearly 5 yards per carry. The running game has been the key to the success of Thompson, as the play action pass has been the staple of the South Carolina offense so far this season.

Missouri poses a few problems offensively as well. Maty Mauk has come into the 2014 season simmering like Thomspon. He’s already thrown 14 touchdown passes, and he is also a threat in the running game — he is the Tigers' third leading rusher. His go-to guy so far this season has been Bud Sasser, but Darius White and Jimmie Hunt have both been major contributors in the passing game.

The Tigers also boast a potent running attack led by Russell Hansbrough. Hansbrough gets the bulk of the carries, but the Tigers also have a two-headed monster in the backfield with Marcus Murphy sharing a lot of the responsibility carrying the rock for the Tigers.

This game should be pretty close, but expect South Carolina to find a way to win this one. The Tigers have the edge on special teams, but the tougher schedule that the Gamecocks played shows its benefits. I don’t expect it to be easy, but I do believe that Steve Spurrier will find a way to push the buttons of his team and the Gamecocks will not come out as slow as they have in previous contests.

They better be cautious, though, because this Missouri team is very capable of putting up a big day and spoiling the Gamecocks' chance.