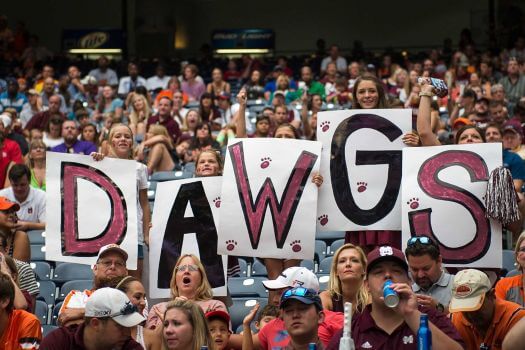 If this country still exists in 25 years, two men might sit in a Mississippi bar. Hank Williams will twang in the background as a sliver of sunlight exposes streams of dust. The particles gain magic as Conway Twitty plays and the song makes the men think of a time held dear.

After a minute or two, one of them might look at the other as he swigs his cold bottled beer. “Remember that Dawgs season in 2014? Wasn’t that one helluva time?”

Excuse the space-time-stereotype continuum for a moment. Think of the moments Mississippi State and Ole Miss fans have to embrace and cherish, in a land where college football means more than most anything you can shake a stick at.

There are the Ohio States, Alabamas, Notre Dames, Oklahomas, Florida States, USCs and other traditional powerhouses. If they aren’t at the top now, they will be one day soon. Those fans remember the titles. The -s at the end puts them in a class all their own.

Most schools aren’t the cream of the crop. They sit in the middle or the bottom and stay there until one year — and for many it’s just one year — it all goes right. The blessed become landmark teams for their fans, who hold on to them the same way your grandmother used to keep old letters from those who have long since passed.

Such seasons belong in envelopes inside of zip-locked bags, only to be taken out to show grandchildren just so they can remember a time when the pen strokes meant effort and tip-top handwriting. When your team’s had its year, the details are always a story away.

A being would be hard-pressed to predict future domination from the Dawgs and Rebs. It seems possible while even more impossible at the same time. In most likelihoods, this is it. They will play out their schedules. They may lose a few games. Maybe one will go undefeated. There’s a shot they play each other twice — in the Egg Bowl and then, in the national title.

There’s plenty of football left. Plenty of memories — good and bad — left to make. No matter what happens, there will be a Mississippi State fan from way down in the hollers who remembers three consecutive wins against top-10 foes. The dust particles float even slower in his beaming light.

It’s up to the future to tell us who we became and how we got there. Hearts will break over box scores and replays the same way they always do. Dak Prescott might only become the answer to a trivia question, but he’ll always be the man who led those wins. It’s enough to make you remember the national titles Colorado, Georgia Tech and Washington won.

Those crowns don’t sit within glass cases in the archives of the average college football fan. If you ever find yourself in Boulder, Atlanta or Seattle, you’ll find recollections of every game with full detail. A banner will hang on the wall of that local watering hole just a shout from the city. Those teams become something greater. So do the Ryan Leaf-led Washington States and the Jake Plummer-led Arizona States.

Every so often, a team gets a shot at its greatness. Whether or not it achieves it — or deserves it — is a mere footnote to those involved.

By the time your head gets wrapped around the fact that the Magnolia State is the center of the football world, you’ll likely wave goodbye to it. It matters not if it’s real or true. What matters in this great spectrum of fanhood is that some kid will grow up with an image of the Oxford night when the goalposts left The Grove.

Years will pass. Everyone will move on, and no one outside of Mississippi will give a damn. That’s the universe.

Whether or not you know it, you’re watching the evolution of a memory. Twitty will come on the dial and you’ll change the station faster than birds scatter near gunshots.

The maroon-clad man at the bar will look ahead with a deep blankness in his stare. He’ll mouth the words as his associate speaks about Prescott’s touchdown run. Slowly, he’ll remember as his lips invisibly sing to the darling that it’s been a long time.

That memory, well, she’s just as lovely as she used to be.