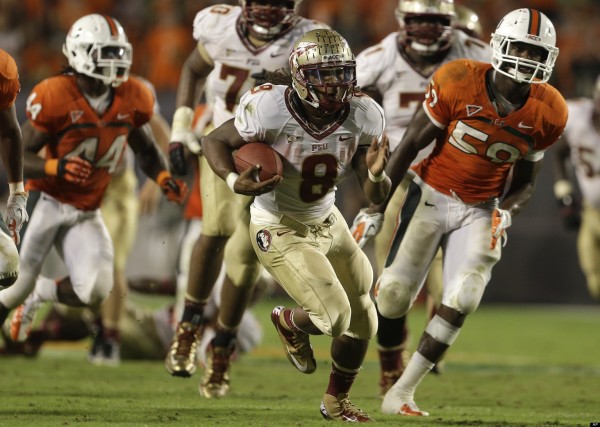 The world has not gone mad.

Saturday will revert back to the early ‘90s and early-aughts as Tallahassee, Florida will stake claim to having possibly the best game of the season on the hallowed ground once patrolled by Robert Clecker Bowden.

Florida State and Miami on Saturday night won’t have the likes of Charlie Ward, Deion Sanders, Michael Irvin, Ray Lewis, Ed Reed or any horrible about of kickers on either side. Instead there will be a man named Duke and another named Famous Jameis and all will seem right in college football.

Because Miami, Florida State and even the ACC needed to travel this sort of road to make everything feel like old times.

FSU and Miami was never meant to last on the national conscious as the most dominant college football rivalry for the better part of two decades. There needed to be lulls involved, much like Miami attempting to regain footing in the mid ‘90s while FSU was on top and in the last few years where the Noles kept chugging along. No rivalry, no matter how strong or great can sustain in glory forever.

And this one might rank highest on the nostalgia meter for fans. They remember whoever winning this game having a dead lock on appearing in a big bowl game with the crystal football on the life. They remember how every play seemingly felt like the Earth was going to split open. They remember vividly more than any other of why Florida State/Miami was the thing in college football.

But it hasn’t. Damn sure not recently.

Remember how long we’ve been saying “The U” is back and how hollow it sounded? How flat and dismayed Miami fans felt after watching Jacory Harris use a Labor Day night in 2009 against the Noles to give us that false hope? How every year Randy Shannon trotted out a highly touted recruiting class only to fail to hit a 9-win plateau almost every year? How the Canes, once considered the golden child for a 21st century football program couldn’t even sniff the conference title game of a league that only dominant player resided in Blacksburg? The lean years have not been kind to Miami -- Nevin Shaprio turning into Scott Storch and damn near sinking everything not withstanding. 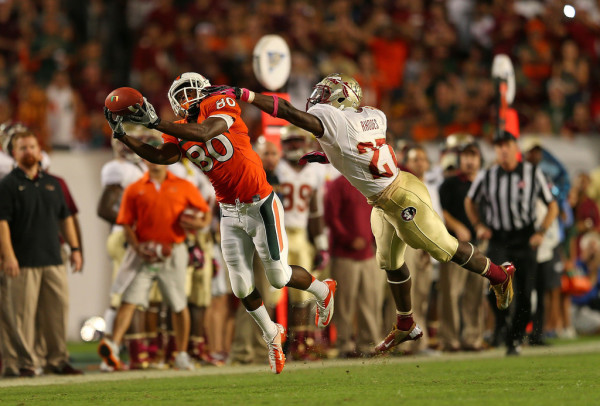 This current Canes squad, held together by timely defense and a running back who seems like the East Coast version of De’Anthony Thomas almost seems like a fable. They were in elementary school when Miami & Florida State played their last real meaningful tilt with both teams at super power level (2004 Orange Bowl). They know the history of The U, they know how it burns any Seminole when they utter the phrases Wide Right I, Wide Right II or even 26-25.

They know the score because I know the score. And everybody who immediately believes a kid from Alabama with an infectious personality could be the first since Chris Wenkie to hold the Heisman up in garnet & gold does too.

Florida State is no stranger to miscues, to inexplicable losses when they seemed prime for the promise land. Once they treated Clemson like George Foreman did Joe Fraizer in Jamaica, it immediately because Pasadena or Bust. Nobody has won the ACC more than them -- and nobody has been sent to the Orange Bowl to play a pauper than them. If there is ever a year where the Noles seem to have every tangible and intangible to sit on the Mount Olympus of college football then this is it. Mind you, before Alabama attempts to do it this year, the Noles are the only team to ever play for three consecutive national titles in the BCS era and might be a Snoop Minnis incident away from claiming at least two of them.

And the ACC, which hasn’t sent a school to play for it all since Bush v. Gore determined an election finally, finally can stake a claim at the big boys table -- a year before their basketball side gets even stronger with the inclusion of Louisville. The ACC knows their BCS bowl record looks like a bad shooting night from Derrick Rose these days, that Clemson has always been Clemson and fooled us into the perception that they could be the conference’s top dog. That underachievers such as Virginia Tech and Boston College whom have flirted with greatness but fell flat near the finish line are always perpetually good, but not great teams. This year, in the last of the BCS era has finally pushed the ACC as a full blown competitive conference. It may finally make the ACC Championship game a worthwhile watch for potential recruits and players across the country.

No matter what the outcome may be Saturday night, every party involved needed the other to be great. That’s what makes certain rivalries symbiotic. They feed off one another’s potential. The ACC needed for Miami to be near great again, for Florida State to return to the dominance that penciled them in for a Top 5 finish every year. And Florida State & Miami ultimately needed each other to be good again -- for the sheer benefit of what beating the other truly meant.

One Reply to “Miami, Florida State And The Rivalry Trying To Return To Relevance”