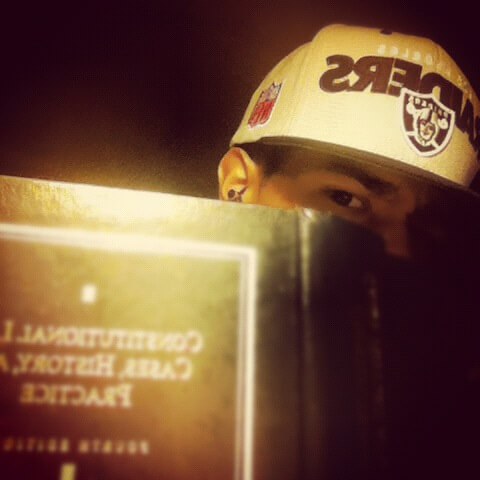 "The Autumn Wind," a near-religious experience in football terms, is accustomed to the trek by now. It originates in California and travels 3,000 miles east to Woodbridge, Virginia. The Wind, much more than a yearly tradition, claims residency in both states.

Carlos Segarra is a 26-year-old Howard University law school graduate. Months of studying came to a head July 30 when his own version of the Super Bowl took place — the New York Bar Exam. Segarra wanted to be a lawyer for as long as he can remember. His induction into "Raider Nation," however, was far simpler.

June 5, 2001. It's the day before Allen Iverson logged one of the most electric big game performances in sports history. The Answer tallied 48 points, five rebounds, six assists and five steals versus the defending champion and previously undefeated-in-the-postseason Los Angeles Lakers for a Game 1 victory in the NBA Finals. In an iconic moment, he stepped over Tyronn Lue after sinking a step-back jumper.

"I grew up as the biggest Jerry Rice fan," the future lawyer says. "When he became a part of the Raiders in 2001 so did I. In the process, I grew to love the team and what they stand for." 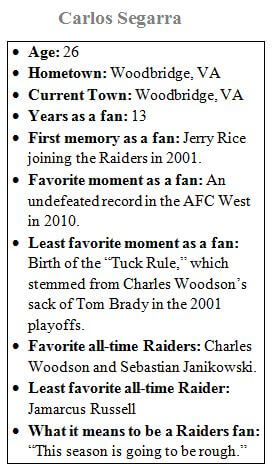 "What they stand for" transcends generations. Historically, the Raiders rank among the proudest of lineages. Consider that the NBA's Detroit "Bad Boys" Pistons drew inspiration from "the team by The Bay," going as far as calling themselves the "Raiders of basketball."

Hip-hop culture embraced the Raiders. Both entities represented outlaws that operated under their own rules, marched to the beat of their own drums and took pride in scaring the living crap out of Middle America.

The Raiders' history appealed to Segarra far beyond Jerry Rice. Yet, being a fan of a team 3,000 miles away has its headaches.

"To be honest, it's very difficult to keep up with them," Segarra says. "I do my best to hit a bar when I can to catch the game, check the website to see what the stats looked like for games I couldn't catch, and follow their Twitter tracker to see what's happening."

When all else fails, he streams the games online.

For the entirety of Segarra's adult life, the Raiders have been more of a continuous disappointment than end-of-summer jolt of excitement. Letdown after letdown after letdown mentally taxes even the most loyal fans. The decade-plus run of downtrodden football — sans 2010 when the Raiders inexplicably went undefeated in the division but missed the playoffs — has taken its toll on Segarra.

He reflects on a particular period of unexplainable grief, a knife still lodged in his back. In 2007, the Raiders were blessed with football's version of Willy Wonka's Golden Ticket, the top overall pick. The selection would singlehandedly reconfigure the fortunes of a franchise that had fallen into pigskin purgatory. All they had to do was make the right choice. They didn't.

"JaMarcus Russell," an obviously frustrated Segarra says. "The amount of money we paid him was absurd. In my eyes he's the Kwame Brown of football, and of course we were the ones to find out the hard way."

The pill doesn't get any easier to swallow. Oakland had the opportunity to select Calvin Johnson (No. 2 overall) or Adrian Peterson (No. 7 overall), both of whom will go down as two of the greatest to ever play their positions. Instead, the Raiders chose a mammoth of a quarterback who tossed only 18 touchdowns and 23 interceptions in three seasons.

Oakland has suffered from a string of maddening decisions during Segarra's fanhood, which encompasses his entire education from high school to Howard Law. Part of the blame shifts to the late Al Davis, whom the Virginian remembers as keeping his team "a few steps behind everyone." Stability was anything but reality after Jon Gruden. Draft picks never resulted in more than infield dribblers because Davis "never understood the full picture."

But blaming everything on a man who helped shape the NFL into the current-day billion-dollar conglomerate it is now isn't how Segarra operates.

"The team just isn't great year to year. It happens, and every team has seen the bottom and also had their glory years," he says. "There's plenty of blame to go around, but I definitely don't think his decision making helped the situation."

As for this season, the past 12 campaigns have cemented a valuable lesson for Raiders fans and Segarra in particular: take it one game at a time and never get too excited. Well, that and, "The last person we want on the injury report is our kicker, who happens to be the size of an NFL linebacker."

Matt Schaub receives a fresh start after a nightmare final season in Houston, although the absolute last place on Earth he wants to specialize in throwing touchdowns to the other team is the death trap known as "The Black Hole." Rookie Derek Carr waits in the wing should Schaub struggle. Ironically, Schaub replaced Derek's older brother, David, seven years ago as the Texans' starting quarterback.

And Charles Woodson, Segarra's favorite Raider of all time, re-signed in the offseason. The signing guarantees that Woodson will cap off his Hall of Fame career in the same place it started in 1998.

Hope resides in Oakland, albeit hesitant hope. What looks appealing in August can resemble a dumpster fire come Halloween. It happens every year. In Segarra's eyes, whatever happens, happens. He can't leave. It's called "The Black Hole" for a reason.

"Maybe I should have jumped ship when I was still young and it was still acceptable,” he says. “But now I'm stuck with Raider Nation, and I'm beyond happy to root for them. I'm sure our time is coming soon."

Segarra rides with his client until the wheels fall off and silver and black face paint melts away. This guy's going to make one hell of a lawyer.

5 Replies to “Meet The Fan: Carlos Segarra Braves The 'Autumn Wind' With His Oakland Raiders”