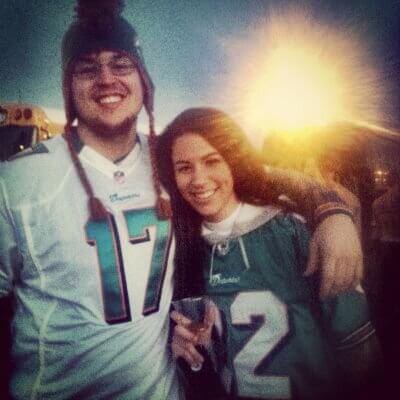 For once, Dylan Dobrasz can breathe. Maybe the Miami Dolphins can, too.

A 19-year vet in Miami football lore, Dobrasz drinks the same elixir each season. It's an omnipresent reminder of disappointment combined with Jim Carrey's legendary Dumb & Dumber line, "So you're telling me there's a chance?"

The Tony Sparano era fades further and further from memory with each day, along with Cam Cameron's catastrophic  1-15, 2007 campaign. Tom Brady's a year older, so that's a good thing. The bizarre circus that was Jonathan Martin and Richie Incognito is no longer a distraction. For good measure, LeBron's not in Miami anymore, so maybe Dobrasz's team can compete for the hottest ticket near South Beach.

Of course, none of this reserved sense of jubilation is possible without a happy home. Dobrasz did what any red-blooded, upstanding, American male would do. He coaxed his girlfriend — Tressa, who originally pulled for the Bills and Giants — to side with his team, albeit through his own version of "tough love."

"I converted her to a Miami fan when after two years of begging, she wore Dolphins gear to a Miami/Buffalo game and saw how terrible Bills fans are," he says.

What's interesting to note is Dobrasz was born and raised in Niagara Falls and became a Dolphins fan because of partial animosity towards Bills fans. Matt Fastow, however, hailing from South Florida, became a Bills fan because Dolphins fans rubbed him the wrong way. Go figure.

Nevertheless, Dobrasz has his eyes set on Sunday, September 7, when the games truly matter. It's a chance to see right off the bat how competitive Miami is in a division he believes is up for grabs.

"I've felt that Miami had a chance to knock off the Patriots last year and this one as well. The Pats are old, and I love what Miami is doing, especially with [Bill] Lazor at offensive coordinator," Dobrasz says.

Last season, Miami averaged a paltry 19.8 points per game, good for 26th in the league. Lazor brings innovation. Dobrasz is interested to see how Lamar Miller — whom he compares to LeSean McCoy in terms of speed and style — benefits from the offensive coordinator's wizardry.

Other than Miller, quarterback Ryan Tannehill's potential breakout season has Dobrasz feverishly marking off days on the calendar.

"Call me a homer, but Tannehill will help us compete for a playoff spot. He is fast, smart, has a strong arm and can make plays. I haven’t been this pleased with a quarterback in Miami since [Dan] Marino," he says. "I know some fans are saying make-or-break, but I think Tannehill shuts up the doubters with solid play this year."

Healthy confidence before season's start is a break from what's become the norm. The past decade hasn't been kind under regimes ran by Bill Parcells, Cameron and Sparano while watching Brandon Marshall come and go and become arguably the second-best receiver in football.

Similar to any fan of any franchise attempting to discover the rare middle ground of success and peace, regrets are common. For Dylan, however, none are bigger than one that pulled the mask over his face in 2007.

The quote "Why would I have left that if I was going to be interested in other college jobs?: is tattooed in Dylan's mind forever. "I guess I have to say it. I'm not going to be the Alabama coach" is, too. Two weeks later, Nick Saban took the job at Alabama, never looked back and solidified his legacy as one of the greatest college coaches in history.

"Hiring Saban would probably be my biggest regret," Dobraz says.

Saban's deflection, then defection and "Bullygate" only scratch the surface as to why Dobraz is overprotective of, what he terms, his "passion." Dobrasz never agreed with Incognito's or Martin's role in the distraction that threw Miami's season off track in 2013. Martin abandoned his teammates. Incognito was "a meathead who took things too far, and he needs mental help."

They're a better team without both basket cases in his eyes. That said, he still feels agitated towards the media, primarily ESPN and Adam Schefter's insistence on slugging the Dolphins with the NFL's version of the "death penalty."

But Dylan has to be overprotective. If he doesn't, then who will? Well, besides him and legendary and controversial Dolphins running back Eugene "Mercury" Morris who famously took pride in the last undefeated team every season to lose (he's since somewhat loosened his stance). Dobrasz wasn't born in 1972, not that it matters anyway.

Being a true diehard is based around occasionally being irrational about your own team.

It's why Cowboys, 49ers and Steelers fans are so quick to mention their handful of rings. It's why Packers fans treat Lambeau Field as a biblical landmark. It's why Raiders and Eagles fans enjoy the stereotype of being residents of the league's scariest and most intimidating stadiums.

It's why a young man born two decades after the Dolphins became the first and only team to run the table through an entire season claims the achievement as if he sat at his uncle's house watching every game on DirecTV.

Teams threaten to join the '72 Dolphins every season. The 2007-08 New England Patriots scared him most.

"I wasn’t stressed until New England won the AFC Championship," Dobrasz admits. "They looked vulnerable in some games and were in a very weak division. But thank you Lord for David Tyree! That would have killed me to share that feat with the Patriots."

It's funny how life pans out.

The Dolphins open the season at home Week 1 against Tom Brady, Bill Belichick and those same New England Patriots. No one is expecting the Pats to run the table this year.

In Dylan's mind, that's because they won't ever have the chance.