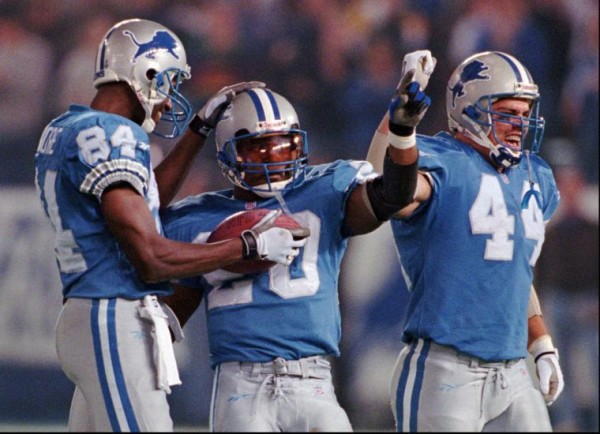 Few have come across a more appropriate descriptor of the state of today's Detroit Lions fan base:

“Really, I've been 'Matt Millen'ed' and somehow lived to talk about it.”

Anthony Horn has flown the Lions flag since 1989. He was a seven-year-old living in Minot, North Dakota then, a town “in the middle of nowhere.” There wasn’t much connection to the city of Detroit except the magic box called television.

“I had just finished my first summer league football season, and I fell in love with the game. And I needed a team,” says Horn, who played the sport through high school. “My father was a Lions fan, and that's who I vaguely remember watching."

“Thinking back on it, though, it mostly came down to color. Minot televised Lions games, and Minot televised Vikings games. And I damn sure wasn't going to be the first young boy to wear purple at Dakota Elementary. Oh, no!”

With that decision, a lifetime of hating the Minnesota Vikings was born. The privilege of calling Barry Sanders his guy came along with the blood-lust. 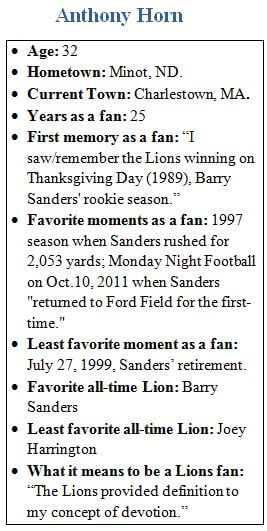 “I watched the greatest running back ever run almost every week from 1989 to 1993. Stats were nothing with Barry,” he remembers. “It was watching him run. He made fools of scholars.”

Even in the Sanders era – which came to an abrupt halt after the 1998 season – being a Lions fan means that Horn has seen 25 years of busts, unrealized potential, missing pieces and, well, he says it best.

Despite living in Charlestown, Massachusetts since his teenage years in the late '90s, Horn’s connection to the Lions is similar to those with Michigan – or at least Detroit – roots. His paternal grandparents were born in the Motor City and his dad retired from General Motors after 25-plus years on the job. For Horn, the
Honolulu Blue he loved as a kid became the symbol of the team and city as he grew older.

“Being a Lions fan is to fall in love with a city that's as horrifyingly beautiful as the franchise,” Horn says. “It's like a reflection of each other. You come to a deep understanding of life through loving the team and the city the team's within. It's real. Whoever's left there. Maybe they can't afford to leave, or simply don't want to, but they care. Real fans. Scrapping everything to support all they have left. That's our team. They rep our city.”

All of that reminds you it’s not easy being a Lions fan. Every other Detroit-based pro sports franchise has won at least one title and played for more since the Lions last won the NFL championship in 1957. The stretch includes the since-relocated three-time WNBA champion Detroit Shock and the one-time Turner Cup champion Detroit Vipers of the International Hockey League.

Meanwhile, the Lions haven't sniffed a division title in 21 years. They last appeared in the NFC Championship Game in 1991. And yes, they’re one of four teams to have never played in the Super Bowl.

Calling it the best coaching hire in his 25 years of being a fan, Horn remarks, “I happen to profoundly respect the (re)hiring of an African-American coach in the NFL, but particularly in Detroit.”

After all, nearly 85-percent of the city’s population is African-American.

In addition to Caldwell, more help arrives on offense for the strong-armed Matthew Stafford and the All-Pro, All-Incredible wide receiver Calvin Johnson.

It comes in the form of Golden Tate.

“He defrauded the Packers, and as a Lions fan, I am always pro-whoever is playing the Packers, Vikings, or Bears,” Horn says like a true Lions fan. “I like Golden's productivity: 64 catches and five touchdowns last year is nothing to sneeze at. But I wonder if Golden is going to want a little more, perhaps a little too much, of that light. Is he really going to be breezy with being Hobbes in this relationship?”

A bolstered offense, a young defense with experience and a new head coach has Horn hoping for a shot at the NFC title game in late January. He’ll take anything to give him better playoff memories.

“One playoff win in franchise history and it happened during my 25-year fan tenure – 1991 against the Dallas Cowboys,” he recalls. “A game I remember vividly because Barry Sanders had been stopped cold by the Dallas D in the first-half. I think that's when I discovered existentialism.”

Existentialism is heavy. However, free will is what kept Horn in his seat, as Sanders capped off the 38-6 blowout with a 47-yard touchdown in the fourth quarter.

“Look, I'm a Lions fan. I don't expect much,” says the Boston-based real estate agent. “But this year, for the first-time since Barry, I have a team that I can feel good about heading into the season. That's a major change. And dare I dream of a second playoff win to fulfill my prediction of appearing in the conference championship game? Dare I do! I'm expecting 11-5, division title, divisional playoff win, appearance in conference championship game.”

Even when there’s hope, there’s fear when you root for the Lions. After talking about the litany of seasons that range from bad to humanitarian crisis-level bad, to we-were-RIGHT-THERE, to mediocre, Anthony Horn has the right words to explain his allegiance to the team. He compares it to a relationship with multiple breaks.

“Really, I must be crazy to still be doing this,” Horn reveals. “I hope this isn't one of those moments of clarity where I leave here, metaphorically.

5 Replies to “Meet the Fan - For Better Or Worse, Anthony Horn Dons The Honolulu Blue Of The Detroit Lions”