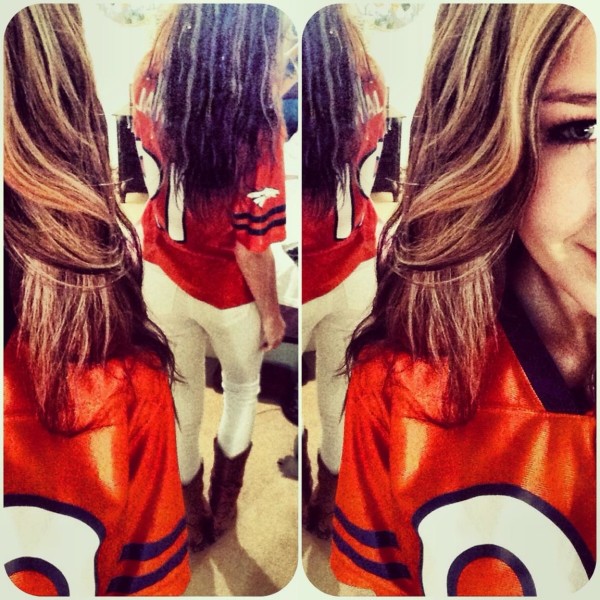 She lived in Las Vegas for 16 years. The Casper, Wyoming native watched football, knew the rules and teams to go along with it. A change of scenery in 2010 gave her a new hometown.

It also presented a football team.

Morgan Twiddy knows the perception. She moved to Denver and now follows the Broncos. While the nasty B(andwagon) word worries her, Twiddy sticks to her blue-and-orange guns.

“They’re easy to like, and the energy in this city when they play is amazing.” 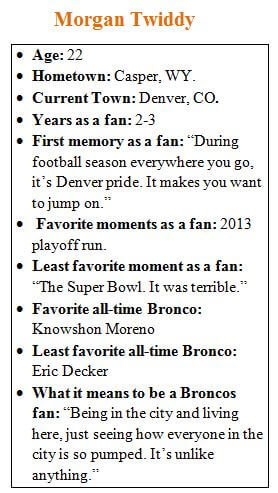 The Mile High City gradually adopted Twiddy. It took time. She remembers the fear of relocation. Twiddy harkens back to memories of loneliness in a room with more than 234,000 other people.

All she could do was grasp, hold and make it her own.

“I would drive around in my (Volkswagen) bug and see people out,” she recalls. “And I remember wishing I had people to go out with.”

Transformation to a sports fan came with help from an unlikely source. She moved to Denver with her best friend and mother, whose boyfriend devoutly follows the Colorado Rockies.

Eventually, the itch to scratch became the Broncos. Peyton Manning’s arrival helped the itch sprawl. Soon after, Twiddy embraced it.

She reserves the right to root for the New Orleans Saints — due to her grandfather’s and boyfriend Nate’s allegiances. But, last year’s playoff run solidified whatever question remained unanswered in her fan glossary.

The city became enveloped by its team. She’s a Denver-ite now. To be one, she must become enveloped too.

“I remember I was so excited for the Super Bowl, I requested off work a month in advance for that Sunday,” she remembers. “I ended up having to work until 2, sped home.

“I just remember the intro with all the pictures of Peyton (Manning) through the years, and it made me cry. But, I am a sap.”

Saps feel lonely and seek comfort. They seek a way to fit in among strangers. Football helped a sap, but it also taught a lesson.

Fanhood becomes a fickle thing among the crowd that’s been in the same garb for seasons. New fans must take their lumps in order to touch a small part of the pain others carried for years. Twiddy’s disappointment in the Super Bowl blowout helped her see that side of the coin.

Now, she’s ready to take her rooting interest to the next level. With a preseason home ticket in hand, Twiddy will see her first NFL action.

“I think they’ll win the Super Bowl this year,” she says. “I think they have a really good chance to go that far and win it this time.”

It’s fair to say, as Manning and his horses fell four quarters short last season. The prediction only encapsulates possibility. She’s a virgin fan, without memory of the Orange Crush or Elway’s drives. She didn’t jump for joy at the legendary quarterback’s dive in Super Bowl XXXII. Mike Shanahan and Dan Reeves are just names for her.

She speaks to Denver and how much it meant to her teenage self who found trouble often in Sin City. Twiddy knows her home now is where it ought to be. People are friendly, laid-back and united under the Broncos.

No one gets to choose where they’re from. Most can decide where to stay.

“It’s an easy place to fall in love with,” she says. “I’m so glad the season is back because it’s so fun here. The city comes alive.”

People like Twiddy make it live. It lives around her, with her and in her as the place she didn't know and, now, could never leave. The Broncos are a symptom of her love affair, not the entire portrait.

Still, there must be something to a fresh start in a new place and a group of people clad in the same colors. To hear Twiddy tell it, the feeling is something strong, important and valuable.

It's also a long way from loneliness.