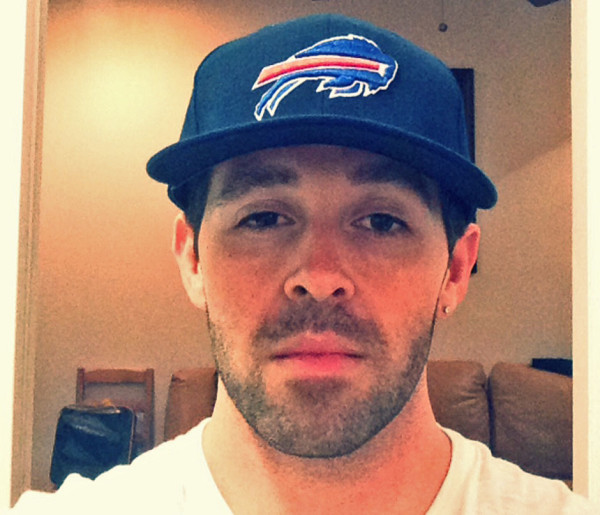 Here at The Sports Fan Journal, we hope to evolve and deliver something not found in any other corner of this here internet. We bring you Mark Trible and Dillon Friday's NFL Countdown project.

A fan from each NFL team will be featured as we anxiously away the season's kickoff.

Someone needs to tell the fans' stories. What better place than their trusty Journal? Without further ado, meet Buffalo Bills fan Matt Fastow.

The world of radio turns on the axis of adaptability. On-air talents add new songs and material to remain relevant. They book new guests. Some of these same guests occasionally fail to honor their obligations. New songs are added to the rotation. On-air talent must always remain fresh. New guests need to be booked. Some of those new guests occasionally fail to honor their obligations. Perhaps the best adage to live by in the radio world is "expect nothing and prepare for everything."

Matt Fastow understands that better than most ever will. The Fort Lauderdale, Fla., native lives in the communications capital of America — New York City. For the past six years, he's worked for SiriusXM. He’s spent the past 18 months as executive assistant to the company’s president.

As has been the case for the majority of Fastow’s 29 years, sports are an integral part of who he is and what he’s become.

Dialogue shifts to a subject near, dear and depressing to Fastow’s heart — the Buffalo Bills. Cheering for a team nearly 1,400 miles north sounds quirky, especially when another storied franchise has called South Florida home for decades. 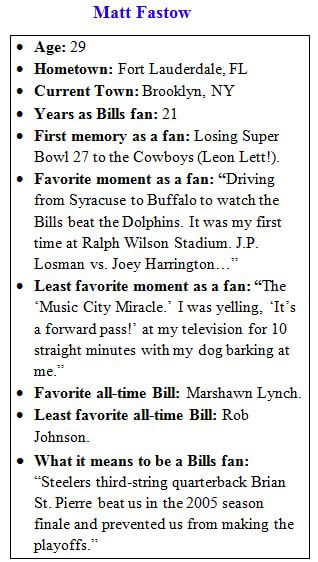 “Becoming a Bills fan from South Florida, it’s weird. It was in the early '90s when they had (Jim) Kelly, Thurman (Thomas), (Andre) Reed, Cornelius Bennett, Bruce Smith, all those guys,” Fastow says. “And, I also think part of it had to do with I didn’t like Dolphins fans.

“I don’t know. I didn’t like (Dan) Marino or that team so it went hand-in-hand.”

Childhood influences how we matriculate through adulthood. We leave certain aspects behind but rarely abandon the people, places and memories that serve as life’s foundation. That’s why, despite the season standing within arm’s reach, a healthy chunk of Fastow's Bills concern continues to lie with one of the franchise’s most recognizable figures — Jim Kelly.

A 2002 inductee into the Pro Football Hall of Fame, the only stat worth a damn in Kelly’s career is one more win. The daunting opponent is cancer.

“It’s one of those things where you don’t want to lose the guy,” Fastow says. “He was our last beacon of hope for winning teams.

“Since he’s been retired from playing, it’s gone downhill. But it’s great to see him surviving and going out. Yeah, he’s lost a lot of weight, but given what could have happened, it’s a blessing to see that he’s fighting on.”

For a franchise that hasn’t made the playoffs since the “Music City Miracle” — a topic nearly akin to disrespecting someone’s mother in Buffalo — memories of yesteryear serve as a crutch for the franchise and its fans.

On a grand scale, the majority of football fans remember the Bills for one accomplishment. It's a feat so unique, we'll likely never see it duplicated in professional football. Losing four straight Super Bowls from 1991 through 1994 is an achievement that has since settled comfortably in Fastow’s mind over the years. How many franchises can say they made it to four Super Bowls period, let alone four consecutive?

“I think when I was younger it was always seen as a bad thing,” Fastow says. “As I’ve gotten older, I look back and realize to win one game in the NFL is tough.

“To win that many games in that short time span with the same coach (Marv Levy) and essentially the same roster for four straight years is a remarkable achievement. Looking at it now, it’s a great thing, but the what-if’s always hound you.”

Since then, life as a Bills fan has been a fascinating case study of the NFL’s version of Murphy’s Law. There was the J.P. Losman experiment. Rob Johnson over Doug Flutie appears explicitly more asinine in retrospect. Taking Mike Williams fourth overall in the 2002 draft almost immediately went to hell wearing gasoline boxers. And the Chan Gailey era produced a 16-32 record.

To understand the lineage of Bills fans’ despair is to understand why Fastow’s approach to this season is reserved, at best. Sure, the Brady-Belichick Reign of Terror over the AFC East will end at some point. The Jets are the Jets, a statement with no explainable meaning. Near Fastow’s hometown, the Dolphins could split time between a team on the “come up” or one destined to enjoy middle-of-the-pack purgatory the next few seasons. As Fastow puts it, the division is a “crapshoot,” despite New England deservedly being the favorites.

The beauty of football in July is the unknown. Excluding the reigning champion, every fan base has a chance to evolve last season’s blunders into this season’s fairy tale.

It isn’t the NBA where only five or six teams have the talent to win it all. With good fortune in the injury department and personalities meshing on and off the field, teams rotate shifts in the NFL’s elite upper class often.

The cycle causes Fastow’s belief in EJ Manuel, the Bills’ second-year quarterback who found a respectable amount of success in his rookie campaign. It’s also why he exhibits — as he puts it — “forced optimism” in regard to Sammy Watkins.

Like the Falcons’ five-pick trade to acquire Julio Jones out of Alabama in 2011, the Bills sent first-round picks in 2014 and 2015 to ensure Watkins called Western New York his home for the foreseeable future.

“It’s one of those things where we’re really putting ourselves into an elite player who can hopefully take that next step,” Fastow says. “I won’t say we’re a playoff team right now, though, because we haven’t been in 15 years. With personnel we have on both sides of the ball, it’s something to look forward to.”

Said personnel won’t include linebacker Kiko Alonso, who will miss the entire 2014 season with an ACL tear and whom Fastow referred to as “the anchor of our defense as a rookie.”  However, glimpses of hope line up on the other side of the ball.

A hopefully healthy Manuel for 16 games under center with weapons in the ilk of the speedy Watkins, Robert Woods, the recently acquired Mike Williams from Tampa — who claims to be in “A-plus” condition — and C.J. Spiller and Fred Jackson in the backfield represent a potentially lethal O.

At least, that’s what Fastow hangs his hat on.

Long-tenured Bills fans understand why the traffic of talent seems to depart from Buffalo as quickly as it arrives. Sunday traditions of hitting local bars to chug brews and devour wings isn’t as appetizing when your team’s culture of filthy losses resembles a modern-day version of “Pig-Pen” from Charles M. Schulz’s Peanuts gang.

“It’s not fun to go out, find a bar showing the Bills game, we lose and waste money on wings and beer. There’s no fun in that,” Fastow admits. “I’ll catch games on SirusXM or on local or national TV broadcasts. It’s nothing too grand in terms of a Sunday ritual.”

As melancholy as the conversation sounds, it’s actually delightful. Fastow enjoys talking Bills football, though it’s been the source of profound frustration since the century’s turn. There’s honor in riding with a team through droughts. It’s an unofficial contract every fan signs and hopefully abides to throughout the course of his or her life. In a supernatural sense, our teams follow us much longer than our time on Earth can ever hope to maintain.

It’s a calling card. A birthmark, really. It’s why we remember how our family members remained devoted. It explains why whenever something positive or negative happens with a close friend or family member’s team we make sure to either offer an ear to rant or poke fun toward, oftentimes within the same conversation. The past decade and change hasn’t been kind to the Bills and their fans. Fastow is no different.

The level of transparency between winning and losing is an equation all too familiar to him. The wins feel marvelous and represent a break from the norm. The losses ease as time passes. If anything, the Oklahoma City Thunder provide staunch reminders of what it’s like to cheer for a team with championship aspirations year in and year out for Fastow, who grew up a Supersonics fan.

A lifelong hip-hop fan, Fastow ends his interview on the topic of Gucci Mane. The can’t-do-right rapper has seen his fair share of run-ins with the law. He’s gone on perplexing Twitter rants. Now, he sits in an Atlanta correctional facility until late 2016 for possessing a firearm as a convicted felon. He’s also one of Fastow’s favorite rappers. When asked if any correlation exists between the artist affectionately known as “Guwop” and the Bills, he pauses for a moment then laughs.

“I guess it just says about me … I don’t know. I’m willing to supports troubled cases.”

8 Replies to “Meet The Fan: Fastow Supports His 'Troubled Cause,' The Buffalo Bills”