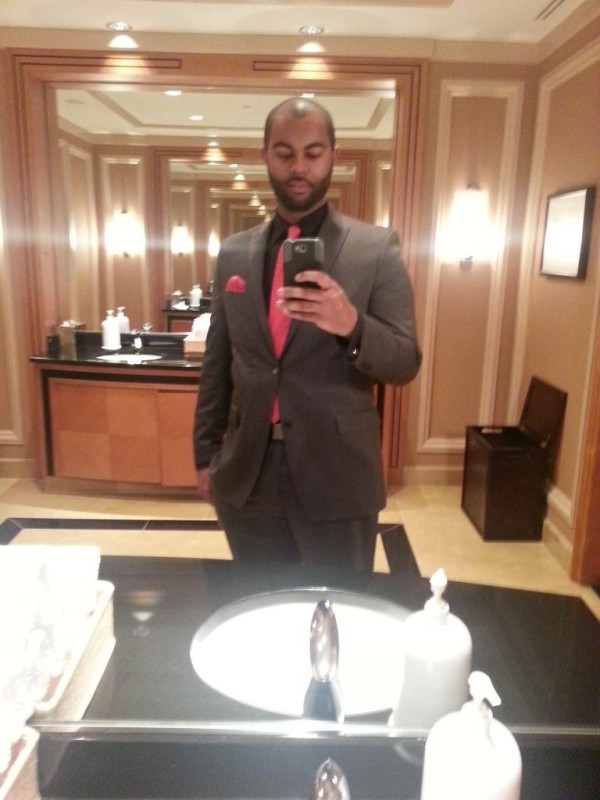 It’s been long known and understood that in the South, college and even high school football take center stage over the NFL in the eyes of many fans. There's no exception to this rule in Atlanta, where the ebbs and flows of fandom sway underneath the Atlanta Falcons, despite nearly 50 years of calling the Georgian metropolis home.

For Justin Martin, being a Falcons fan means that your team plays third string in town, fair or not.

“Growing up in the South, college football is king," he says. "Then, high school football follows, then, professional. For the Falcons, there was never a deep sense of loyalty amongst the community because everyone was pulling for UGA, Georgia Tech, Bama, Auburn, Clemson, etc. And then, we drafted Michael Vick. Instantly, his arrival gave everyone something to be excited about.”

City and region pride buoyed Martin’s fanhood into his college years, but not only because he was a native Atlantan, per se. Two years after the Dirty Birds drafted Vick, Martin trooped up north for college and found himself located in the hotbed of athletic talent and from where Vick hailed: Virginia's Tidewater region. The roll call is seared into memory for Martin. 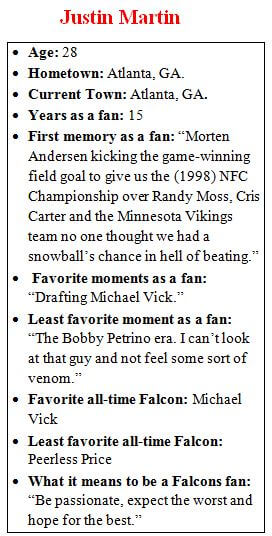 “Vick, Allen Iverson, DeAngelo Hall, Ronald Curry, Plaxico Burress, Percy Harvin, Kam Chancellor and scores of others all hail from the 757,” the Hampton University graduate spins from thin air. “To make a long story short, Vick is a god in that area. So to have ties to both areas for me was fantastic and something I could really hang my hat on as a Falcons fan.”

Therein lies the rub when it comes to Vick. Any mention of the current New York Jets quarterback harkens back to one of the darkest chapters for a team in NFL history.

“When the news of the dogfighting scandal first broke, I wanted so badly to not believe it,” Martin recalls. “I thought, 'Surely he couldn't be that stupid right?'

"Here he was, the most exciting player in the league, with a shoe deal, and having just signed a 10-year, $130-millon contract that was going to make him the face of the franchise, and possibly the league, for years to come. To throw it all away 'cause you wanted to fight some pits? Naw man. No way."

To think of it another way, there were Vick-only fans who didn’t come back to the Georgia Dome once he was indicted.

“We had had great players before: Deion Sanders, Jessie Tuggle, Andre Rison and Craig 'Iron Head' Heyward to name a few. But there was nothing like what happened once Vick arrived," Martin remembers. "There are a lot of people in the city that were fans STRICTLY because of Vick, and once he went through his issues, those fans fell through the cracks and haven't been heard from since.”

As Falcons and NFL fans clearly recall, Vick's infamous meeting with Roger Goodell prior to the 2007 NFL Draft was just the beginning of a bizarre year. Newly hired head coach Bobby Petrino left a four-sentence resignation note to his players in their off-day after a Monday Night Football blowout loss midseason. Worse, before Petrino’s act of cowardice, Vick was sentenced to 23 months in a federal penitentiary.

The not-so-bionic quarterback combination of Joey Harrington and Byron Leftwich meant that the emergence of Roddy White was completely overshadowed. The franchise’s leading wide receiver notched the first of six consecutive 1100-plus-yard campaigns in 2007.

As Martin remembers, the sense of betrayal felt by Falcons fans during that tough season became the catalyst for a much-needed do-over.

“Vick goes to jail, Bobby Petrino gives his best Baltimore Colts impression, Harrington starts games for us, and the 2007 season goes into the tank. And then Mr. (Arthur) Blank hit the little red button.”

The red button. Or better yet, a clean slate. For those who have seen "The Dark Knight Rises," think of the fans at the time as Selina Kyle — wounded and embittered, with some hope sprinkled in with cynicism toward any immediate change. Blank, the team owner since 2002, would be thought of as Bruce Wayne by holding the chance at a reboot of the franchise in his hands. With that, a new regime was born with General Manager Thomas Dimitroff, first-time head coach Mike Smith and Boston College’s Matt Ryan under center.

Under Vick and a mix of head coaching from Dan Reeves and Jim Mora Jr., Atlanta finished with a 38-28-1 regular-season record and a 2-2 playoff record over six seasons. Under Ryan and Smith, the Falcons’ boast a 60-34 regular-season tally but just one win in five playoff games. Winning is still the cure of all that ails, right?

When asked about the differences in consensus between the two most successful quarterbacks in Falcons’ history, Martin offers a case of book cover analysis — but not exactly judgment — in how Vick and Ryan are perceived, especially considering how the NFL is the most popular entertainment company in America.

“Matt Ryan is the antithesis of what Mike Vick was. Ryan, the clean-cut, prototypical pocket passer from the Northeast was a far cry from Vick, the tatted up, once-in-a-generation athlete from the streets of Newport News," Martin explains. "Fans rallied around that. They looked at Matt Ryan as, 'Hey, that's a guy that I can support.' Attending games became more of corporate entertainment than they were for the everyman, but that's the entire league in general.

“You don't make $9 billion in revenue catering entirely to Joe Average. People won't believe that, but Roger Goodell, as much I can't stand him at times, the man knows who his most important clientele is. He doesn't make upwards of $20-million per year in salary to make unsound business decisions.”

The business of Ryan speaks to something larger with the franchise and the Atlanta region, playoff success be damned. No one will dare say that the new stadium currently under construction is being built off of a quarterback judged mostly by an unflattering postseason record, but perhaps the momentum behind it was part of a continued desire for renewal. Blank has pushed for new digs for a few years as the 22-year-old Georgia Dome doesn’t appear to match the luxury pizzazz of most other stadiums around the NFL.

“I understand WHY we're doing it,” Martin says, “but I don't feel as if we need one. The Georgia Dome is a fantastic place to watch a football game, and when it is packed, it is LOUD!”

It’s been a controversial and divisive matter among Atlanta-area residents.

Yet, as the foundation of the new building is being prepared, so is the foundation of the upcoming season. After a horrid 4-12 record in 2013 where Ryan was sacked far too often and forced to throw more than he should have, the defense underwhelmed and key offensive players caught the injury bug, 2014 just has to be better for a snakebitten Falcons fan.

Last season was an anomaly, according to Martin.

“We've shored up both our lines, and while we will sorely miss Sean Weatherspoon, I think that Desmond Trufant and Robert Alford are ready to take that next step in their games,” the Atlanta native believes. "I also hope, at the very least, we can stay relatively healthy this year. If we stay healthy, I think that we have the talent, especially offensively, to win a lot of games this year.”

Not completely unlike most of their NFL brethren, the Falcons always believe in next year because it can’t get any worse than the previous season. A major part of this comes from falling short of expectations in a hotly contested NFC South. Nationally, it’s fair to say that the disaster of 2007 is miles down the road, but it’s mainly because the disaster of 2013 sits in the rear-view mirror. Justin Martin, like many other loyalists to the Falcons, keeps looking at what’s ahead of him this coming fall.

“I've supported my boys through some lean years, and some good years, but at the end of the day it boils down to this simple reason why I retain my Falcons fanhood," he says. "When I sit down to watch games on Sunday, there is not a single team in the NFL that makes me more emotionally invested in, and passionate about, the game of football than my hometown Atlanta Falcons. That's what it's all about.”

One Reply to “Meet The Fan: Justin Martin Falls Down And Rises Up With The Atlanta Falcons”