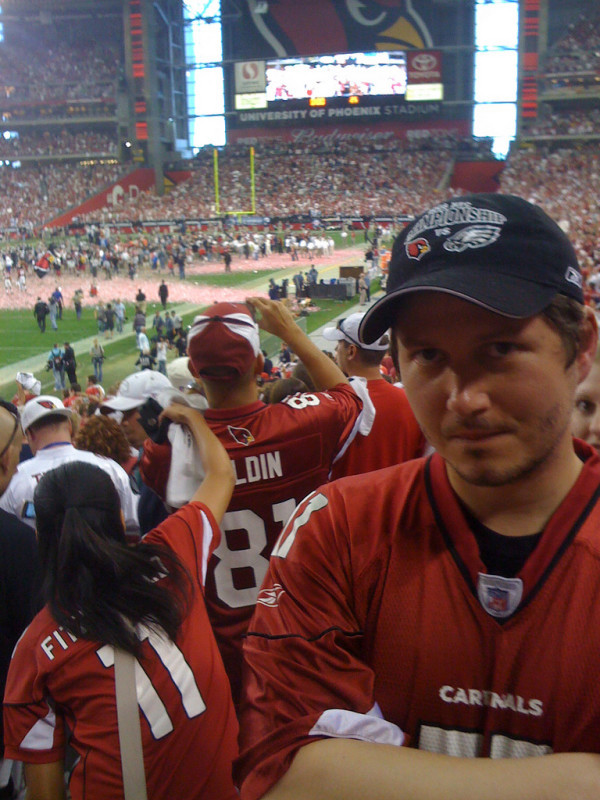 In our mass consumption of sports, we’re led to believe that some fan bases are mirages in that they only exist in our minds, despite the fact that every team in a given league plays for somebody. So, when the call for an Arizona Cardinals fan for this series came, there were almost crickets.

Successful franchises such as the Packers, 49ers, Steelers and Patriots had lines of fans wrapped around the block. They begged to tell their stories. Even loyalists of the eternally downtrodden – Cleveland, Oakland, Detroit, Buffalo – couldn’t help but tell personal tales of woe blended with hopes.

Finding someone to speak for what’s actually the oldest franchise in the NFL? Well, that worked out slightly easier than expected, but not because there was an ignored email or tweet. Peruse online media this time of year and you’re reminded that the Cards faithful can be heard loud and clear. That’s because arguably the most famous young sports writer in America has an affinity for Cardinals that moves past the city of St. Louis. 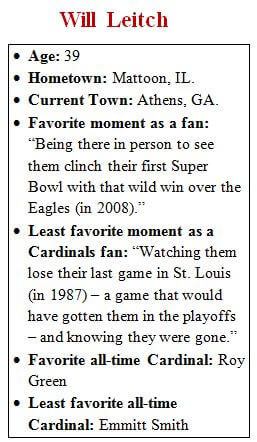 Will Leitch – the founder of Deadspin and senior writer for Sports on Earth – waves the flag for the Cardinals, which means he’s probably heard enough jokes about an obsession with birds thanks to his fandom of the other Cardinals. You know – the ones on the diamond.

“The Arizona Cardinals have never broken my heart because they've never had the forward momentum to do so,” says the Mattoon, Illinois native. “They've mostly existed in the dregs of the NFL, the team that doesn't matter, the team that no one notices.”

That’s largely true except the handful of times the Cardinals broke through the clutter for reasons not dealing with winning football. Over the past decade, you could only recall the oddity of Emmitt Smith in Cardinal red, the infamous Denny Green “crown their ass” press conference and the unfortunate tragedy of the state’s native son, Pat Tillman.

Before that? You’d have to go back to the final playoff appearance in St. Louis from the strike-shortened 1982 season. Two playoff games – both losses – in the mid-1970's. You’d look far in the past to 1947 for the franchise’s last playoff win, an NFL championship as the Chicago Cardinals.

In recent times, the fantasy football legend that is Larry Fitzgerald was the closest thing to relevance the team had.  Yet, once upon a time not long ago, everyone did notice them for on-field play. Winning the NFC West with a 9-7 record – undefeated in a terrible division, but 3-7 against the rest of the league – the Cardinals actually hosted Atlanta for a home playoff game and won. Then, they flew to Charlotte to face the Panthers where Jake Delhomme realized he was Jake Delhomme.

Suddenly, they hosted the Philadelphia Eagles for the NFC Championship Game. All of this really happened:

Pigs flew, we elected and re-elected a black president and LeBron James went back home. Heck, even Bret Hart and Vince McMahon mended fences. Yet, as most events in retrospect, it’s still hard to believe that the Cardinals not only moved on to play in the Super Bowl, but had a legitimate shot at actually winning it.

Leitch thought about all of the losing across state lines – they called Chicago and St. Louis home before arriving in Phoenix in 1988 – penny-pinching ownership, multiple head coaches and bad drafts leading up to the most successful season in over sixty years.

“The one year they broke this pattern, when they took a team that was lousy in the regular season to within seconds of a Super Bowl championship, still didn't break my heart because it was so unexpected that it felt like an aberration, a gift, a dying boy's last wish. You couldn't even be mad: It was just amazing that they were there."

It’s been more than five years since that wonderfully unexpected night and little did anyone know that Arizona kept up with the NFC West’s dalliances with the Vince Lombardi Trophy. After all, it’s the only division since the turn of the century where all four teams played in the Super Bowl. The Rams lost to New England in 2002. The Cards nearly won in 2009. The 49ers fell to Baltimore in 2013 and this past February, Seattle defeated the Broncos.

Looking at the division now, you can watch these teams knowing that defense isn’t a mere concept, it’s a given. The Seahawks, 49ers and Rams can create turnovers, mangle quarterbacks and haunt your quarterback’s dreams for eternity. While the ‘Hawks are champs and the Niners are still contenders, the Rams could be pushed to start season-ticket holders on offense.

So far for Arizona, as good as cornerback Patrick Peterson is, losing Darnell Dockett for the season is tough to swallow for a top rushing defense that already lost talent in its front seven (Karlos Dansby left via free agency and Daryl Washington was suspended for the year).

You’d think that Leitch would pen a missive in anger and frustration, right? Nope.

“The sad part about never having your heart broken, of course, is that you don't really fall in love,” the contributing editor for New York magazine opines. “You cheer for your team, but mostly out of self-protection.”

Self-protection as opposed to self-delusion? That sounds much worse than it is considering that training camps, preseason games and bizarre play in September invite visions of grandeur to overwhelm fan bases around the league.

As Browns, Bills, Lions and Raiders fans can attest to these days, however, there’s a different psyche in rooting for the Cards. You’d love to win, but the deck is constantly stacked against your team, no matter how good and talented it is.

“I root for the Arizona Cardinals the way a parent roots for an unathletic son who is running around a soccer pitch aimlessly: You just hope they don't get hurt, and that they don't embarrass themselves," Leitch says. "The Cardinals have a good team right now, but they're in the wrong division, which means even just to be good, they must be great.

“I hope they are great. But I know better. So I'll protect my flank. And just hope nobody gets hurt. Including me.”

2 Replies to “Meet the Fan: Will Leitch Protects Himself From The Arizona Cardinals”