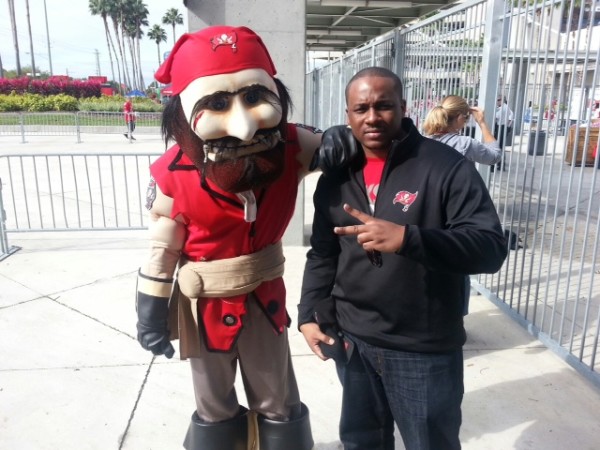 No NFL franchise can trace its success through uniforms quite like the Tampa Bay Buccaneers. Debuting in 1976, the Bucs sported an orange ensemble with white and red trim for its first two decades in the league. The duds, forever known as the "Creamsicles," proved as sweet for opponents as the eponymous treat. Tampa Bay went 0-14 in its inaugural season, 2-12 the next. When asked about his team's execution following a particularly embarrassing loss, head coach John McKay said, “I'm in favor it.”

The fans called the Buccaneers of that era — which featured three winning seasons between 1976 and 1995, as well as the Bo Jackson draft debacle — “The Yucks.”

It's forgotten history according to Steve Jackson.

“To be honest,” the Oklahoma City native says, “whenever I go to Bucs games, nobody talks about the Yucks.”

The 1996 season marked a pivotal year in Tampa football. Head coach Tony Dungy arrived with what became known as the Tampa 2 defense. Pewter and red — not to mention a not so jolly Roger — replaced the creamsicle color scheme and plumed pirate logo. Although the Bucs finished 6-10 that season, Tampa's 14th straight losing campaign, the club made strides to change its laughingstock image.

“If you remember, the PlayStation One had just come out,” Jackson recalls. “I used to play NFL GameDay and would always choose the Bucs. You know, they had Errict Rhett and Derrick Brooks ... I started playing with them, and then I started following them in real life.”

The serendipitous beginning of his fandom couldn't have come at a better time. Behind the likes of defensive standouts Brooks, Warren Sapp, and Jackson's favorite Buccaneer, Ronde Barber, and the power-running combination of Mike Alstott and Warrick Dunn on offense, Tampa Bay emerged from a 20-year morass a contender.

Dungy's team made the playoffs in four of the next five seasons. The lone exception, an 8-8 campaign in 1998, produced an upset victory over the 15-1 Minnesota Vikings. But Tampa made just one NFC Championship game in that span, and after a loss in the Wild Card round in 2001, Dungy was canned.

Jackson believes, and believed at the time, it was the right move.

“We just couldn't get over the hump. Once [Dungy] got fired, I loved the Jon Gruden hire,” Jackson explains. “Our defense could coach itself at that point. We needed someone to run the offense. Gruden was that guy.”

The Buccaneers beat up on the Oakland Raiders 48-21 in Super Bowl XXVII in Gruden's first year in charge. But Dungy's fingerprints were all over the Lombardi Trophy. Tampa picked off five Rich Gannon passes, returning three for touchdowns. Sapp and crew sacked the NFL's Most Valuable Player five times in the blowout.

“We got lucky to play the Raiders. Gruden, because he coached them, knew them so well,” Jackson says.

The mastermind of the champion, though, left the year before.

“Every Bucs fan I talk to — and I talk to a lot of them — loves Tony Duny. Gruden won with Dungy's team.”

“There would be a much more positive reception for Dungy (than Gruden)," Jackson says. "I was at the game when they celebrated the 2002 team. Everybody was there. Gruden came out, and it was kind of this awkward applause. It was funny, but Gruden did coach Dungy's team.”

That sentiment epitomizes a franchise that struggled to find an identity in the decade following the Super Bowl. The Bucs became a mirage to their fans — not good enough to be considered a dynasty, too close to a championship to be considered a failure. They didn't know what to make of their team.

“It's still early enough to remember what it felt like when we won,” Jackson says. “What was it, 12 years ago? So we have this sense that if we're making changes, we're going to do it this year.

“We're a little delusional. We think that our team is better than they actually are.”

The now 31-year-old has taken his fandom to new heights in recent years as his Bucs have found new lows. Head coach Raheem Morris, who replaced a disgruntled Gruden, and quarterback Josh Freeman both showed promise before they left town to jeers. Greg Schiano didn't fare much better in Morris's stead.

But Jackson has made the trip to Raymond James Stadium from his home in OKC an annual ritual. He's had the added pleasure of watching his cousin Gerald McCoy emerge as one of the Bucs' best players.

“It was bittersweet,” Jackson says of the moment Tampa selected the defensive tackle third overall in 2010. “I have love for him, because he's my cousin, but I have to treat him like he's just another player. Luckily, it's worked out.”

Tampa finds itself in a similar position to '96. Defensive-savvy Lovie Smith has assumed head coaching duties. McCoy leads a young, talented defense. And of course, there are new uniforms.

“Let me say this,” Jackson begins, “I like them more than the creamsicles. They look a little futuristic. Like better things are ahead.”

The Langston University grad will make his yearly pilgrimage to Tampa on December 28, when the Bucs host the division favorite New Orleans Saints, to join a small but passionate home crowd.

“A lot of people don't know this, but Tampa Bay is weird. Visiting team fans outnumber the home fans,” he reveals. “The ones that are there are true fans though. I was in a fight with some Eagles fans a few years back, and someone in a Bucs jersey came to my aid.”

Outnumbered and fighting on their own ship — what's more like a Buccaneer than that?