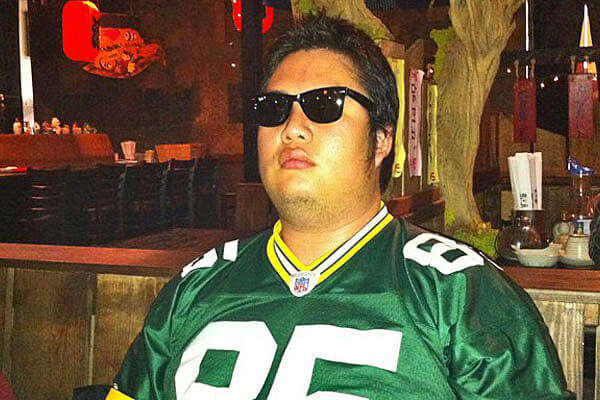 Here at The Sports Fan Journal, we hope to evolve and deliver something not found in any other corner of this here internet. We bring you Mark Trible and Dillon Friday‘s NFL Countdown project.

A fan from each NFL team will be featured as we anxiously away the season’s kickoff.

The 11-year-old didn’t speak English when he moved to Northern Virginia from South Korea in 1997. He knew about Michael Jordan and other NBA stars. Korean TV played Chan Ho Park’s Dodgers games, so the Seoul-born youngster knew baseball. Of course, he recognized the New York Yankees ball cap.

Alone in a new environment, the foreigner caught sight of a football game in his family’s home. He doesn’t remember what happened on the play, but the impact lasted. Immediately, he became one of the only Green Bay Packers fans named Minho.

“The Packers played the Vikings, and something happened,” Minho, who goes by Simon, Lim says. “Brett Favre looked so happy. It stuck with me.

“In professional sports, it’s hard to see someone look so purely happy. It’s just still stuck in my head.”

Favre’s reaction captivated Lim like it did to thousands upon thousands of viewers. Although he didn’t feel comfortable with his new language until 2.5 years after emigration, it didn’t stop him from full-on study of the game.

Lim acclimated to his new home country. He believes football helped him become a “true” American. 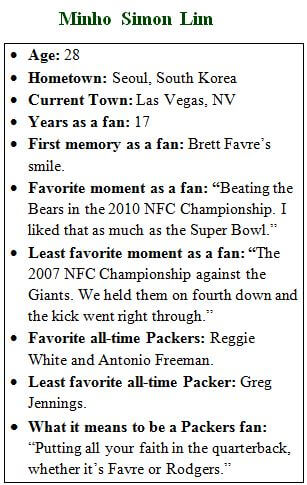 “Football is America’s present time,” he says. “I don’t think there’s any other sport you can learn and be kind of American.

“It’s a crash course on America. Americans, they have a kind of impatience, and I think I’m similar to that. When the play happens, all the focus is on that play. So much is happening. It’s explosive and amazing to watch. I think that’s the mind-set, and I think I’m adjusted to it.”

He compares time between plays to minutes spent flipping through other channels during commercials. No matter how much a person enjoys a program, he or she may feel inclined to see what else is on the tube.

While Lim knows football helped him assimilate, it’s not on his mind when the NFL season starts. Some of his sentences are still in broken English, without articles. When asked about this year’s team, he speaks fluent Packerese.

“I’m excited to see what Ha Ha Clinton-Dix does at safety,” he says. “Our defense might be better than before, but being a Packers fan means putting all your faith in the quarterback.”

As a worker in his father’s gas station, Lim watched the games on his computer. Each week, he talked football with customers. When someone requested a propane tank fill, he begrudgingly put on his Packers work gloves.

Now, the 28-year-old lives in Las Vegas, where he works as a freelance film director and videographer. He earned a degree in film from the University of Nevada Las Vegas in December 2012.

Most of his friends in Sin City are film buffs. Few watch football, but the lack of crowd doesn’t stop Lim from catching Green Bay’s games.

However, a 1-7 lifetime record keeps him away from picking them at local sports books.

“I feel like when I bet on them, they lose,” Lim says. “I’m kind of superstitious, so I stopped.”

He predicts a 10-6 season and a repeat NFC North title for the Pack. What’s more, he’s already guaranteed a week one win at Seattle.

“If we don’t have to play the 49ers, I think we can make it to the NFC Championship,” he says, remembering who ended his team’s last two seasons. “I might even go to a Seahawks bar for that first game just to talk trash. You know what? We’re gonna win. I’ll even pick the score, 24-14.”

The ordinary man might call him crazy or uninformed about his predictions. Little does he know, there’s little Minho doesn’t know about NFL football.

After 17 years, Lim’s dyed-in-the-wool. Even he stuck with the team when Favre left.

“I like that they have a lot of history and are publicly owned,” he says. “They’re not afraid to change, not even over Favre. We kind of have a backbone as a team.”

Hot days pass on movie sets for the man who dreads seeing Adrian Peterson and Calvin Johnson twice a year. He can feel an itch with preseason around the corner. Pretty soon, he’ll get to scratch it.

His voice sounds different than most while it echoes just the same.

“After the NBA and NHL finals and before baseball gets interesting, it’s a little brutal,” Lim says. “Then during the season, it’s hard to wait a whole week for a game.”

It’s tough to get more American than that.