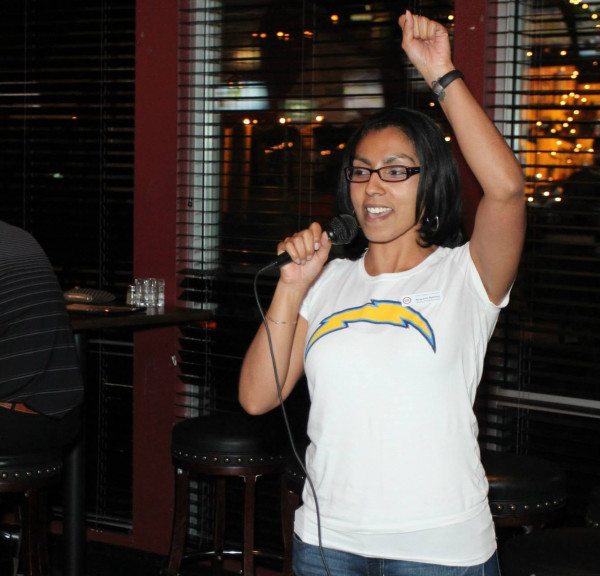 To hear Marguerite Matthews tell it, San Diego is too perfect to have a good football team.

The 70-degree weather, the perpetual sun, the neighboring beaches — it all makes for a paradise in Southern California that lends itself to relaxation.

“That's why it's terrible for football,” Matthews says. “Other places have snow and mud and rain. You need gritty players. 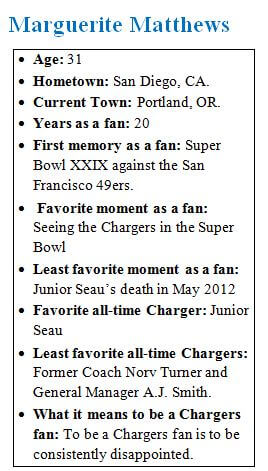 “In San Diego, it's too easy to walk out of practice and into the Garden of Eden.”

Overcast days, in other words, are as common as championships in San Diego.

The Chargers found themselves outcasts in their own city during Matthews' childhood. Many citizens, especially in the young, black community, were quick to align with the Oakland Raiders, a racially progressive franchise that carried a bad-ass appeal.

What was a "Charger" anyway? The Chargers were soft.

That notion, though, was lost on Matthews in her youth. She dates her Chargers fanhood to the 1994 season, when the Bolts reached the Super Bowl for the first and only time in franchise history. Her family hosted a party for the occasion that featured the usual amenities — good food, quality company and an opposing fan hung in effigy.

“One of our family friends was a Niners fan,” Matthews recalls. “So we took one of his t-shirts that he had left at the house, spray painted a bolt on it and made a dummy. We stuffed it with newspaper and put it in the basketball hoop in our driveway.”

The San Diego native calls that Super Bowl, despite the 49-26 loss, her favorite memory as a fan.

“It was a community moment,” says Matthews. “Most everyone in the house was either pro-Chargers or anti-49ers. The Chargers have always been near and dear to my heart.”

Matthews grew up in a football household where both her mother and father loved the sport. Neither of her parents, though, supports the Chargers. Mr. Matthews, an African-American, shifts his loyalties depending on which franchises integrate their teams on the field and in the front office. Matthews' mother, on the other hand, rejects a Chargers organization that has done little for the San Diego community yet asks for taxpayers' dollars to fund a new stadium.

Still, Matthews flaunts her Chargers fandom all the same.

“My mom rolls her eyes, and my dad makes snide remarks,” she says.

The Chargers came to represent home for Matthews. She left San Diego after high school to attend Spelman College in Atlanta. She hasn't lived in Southern California since.

“Once I moved away,” Matthews explains, “I felt this loyalty to my hometown.”

That loyalty has been perennially tested by a team long on promise and short on results. LaDainian Tomlinson set records in the famous powder blue uniform. Pro Bowl quarterback Philip Rivers orchestrated an offense that ranked among the most dynamic in the league.

Shawne Merriman put fear into opposing backfields with his relentless pass rush. Former college basketball player Antonio Gates ushered in a new era of athletes at the tight end position. That collection of talent helped produce 84 regular-season wins between 2001 and 2009, Tomlinson's last season in San Diego, but no Lombardi Trophies.

“If they were bad, you'd understand. You'd just know they're not good enough to get it done,” Matthews says of the frustration that defined the Chargers in the 2000s. “That's not the case. There's no reason they shouldn't be better. You see some things and just say, 'Are you kidding me?'”

It didn't help that Drew Brees, whose shoulder injury expedited the start of the Rivers era, found greener pastures in the Superdome.

“Drew Brees leaving and then winning a Super Bowl soon after …” Matthews struggless to find the right words … “It broke my heart a little bit.”

But heartbreak over a departed star's success pales in comparison to the sadness Matthews felt on May 2, 2012, the day her favorite Charger, Junior Seau, committed suicide.

“It was unbelievable,” she remembers. “Social media is always killing somebody, so I started reading things on Twitter and thought, 'This has to be a joke.' It wasn't.”

Seau's death preceded that of fellow San Diego luminary Tony Gwynn, who lost his long battle with cancer this summer.

“I grew up with them,” Matthews says. “They were involved with the community. They were larger than life figures. They both stayed with San Diego. It's pretty heartbreaking. It feels like part of my childhood is gone.

“It's a tough time to be a San Diego native. We're getting hit left and right emotionally.”

Matthews' somber tone is not unique to memories of Seau and Gwynn. She readily admits that she's grown detached from a league, the NFL, that clouds its hypocrisy with grandeur.

Specifically, she feels disrespected as a black female fan.

“Seeing how they deal with behavior issues bothers me. Like Ben Roethlisberger gets accused of multiple sexual assaults, but it doesn't seem to draw the same type of outrage as a black player who gets caught with drugs. And then seeing the decision on Ray Rice and the treatment of cheerleaders — it's just like, why do I support this?”

Her occupation also inhibits her enjoyment. Matthews earned a Ph.D. in neuroscience from the University of Pittsburgh after majoring in biochemistry at Spelman. She studies the brain for a living.

“I'm an overly educated person, I guess,” says the Portland resident. “These athletes are kind of killing themselves. I'm too aware of the effects of concussions. It makes it harder to enjoy it.”

But the allure of football, and her beloved Chargers, is too strong.

“I love football so much,” Matthews says. “I can't turn my back on it.”

Living in Portland, where she is studying ADHD in children, makes following San Diego difficult. However, Matthews will make her way to sports bars to catch a game or two. One of her two older brothers will send her updates on the occasions she misses a contest.

In the last decade, Matthews has watched as the fan bases around her celebrate Super Bowls. The Steelers won two in her seven years in the Steel City. Seattle lifted the Lombardi Trophy in her first season in the Pacific Northwest. Meanwhile, the Chargers continue to be disappointingly good.

“I'm a good luck charm,” Matthews jokes. “I should move home.” She pauses. “No, I don't think I can salvage (the Chargers).”

At least the weather would be beautiful.

4 Replies to “Meet The Fan: Marguerite Matthews Can Always Go Back Home With The San Diego Chargers”