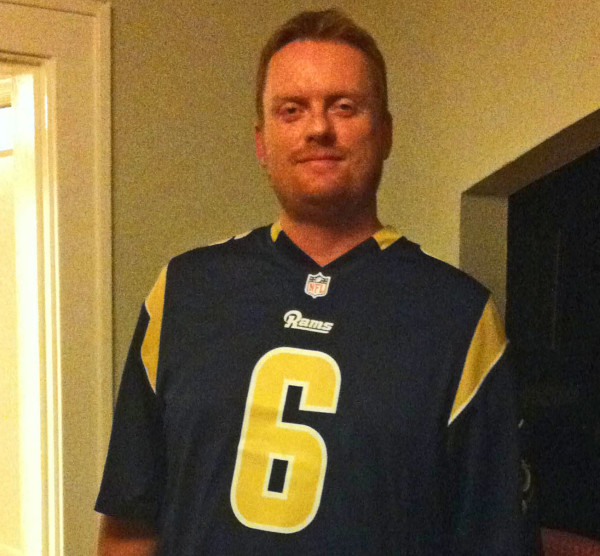 Fanhood, at its most essential form, is both an exercise in and display of devotion. It’s a dedication that’s unlike any other in life and, in many cases, the longest commitment of your life. It’s there before your wife and present before your children as well. It’s there while you’re in grammar school and can exist well into your retirement. And, in many cases, it follows you into your grave – while occasionally feeling as if it’s prematurely driving you towards it.

This could summarize the relationship Jack Walker has with the St. Louis Rams, a franchise that takes perhaps more patience than any other to co-exist with. Since he adopted the team when it arrived on the banks of the Mississippi River in 1995, he’s ridden through the paces with them, and quite the ride it’s been.

For Walker, pro football has been a passion play that was taken to the next level when the Rams arrived.

“We grew up in a time where it was weird for fans in St. Louis,” Walker explains. “The (now-Arizona) Cardinals had moved, and we didn’t have a football team. So a lot of people found their teams to root for from who were popular at the time. 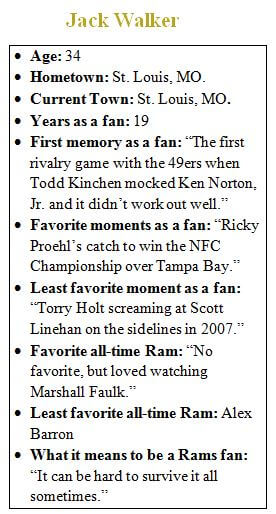 “When the Rams showed up, everybody didn’t instantly adopt the Rams. I was so wholeheartedly excited for them that I took them in immediately. But even to this day, one of my best friends is a Bills fan and another is a 49ers fan.”

In that first season, he got a quick dose of what the heights of expectation can bring. Walker also learned the sobering reality that can set in instantly, something the Rams have specialized in over the past two decades.

After a 5-1 start, Todd Kinchen scored a touchdown. Then, Kinchen mocked Ken Norton Jr. by beating up the goalposts. It awoke the Niners, who went on to beat St. Louis. It sent the club on a downward spiral that year and ushered in the local famous statement of “same old sorry-ass Rams.” It also gave a preview of the lulls that would follow.

Yet, when Coach Dick Vermeil’s version of the team had one of the most remarkable reinventions in history during the 1999 season, Jack was at the heart of it all. St. Louis’s Super Bowl XXXIV victory was a high spot for the city and made the Rams a premier attraction and focal point for locals.

The “Greatest Show On Turf” run from 1999-2002 saw football rise to extreme levels of popularity in the traditional Cardinals baseball-crazed St. Louis area. It was short-lived. The team’s roster overturned, management decisions became muddled and the Rams sank to historically futile times starting in the mid-2000s.

After their final playoff appearance to date in 2006, the Rams embarked on one of the worst stretches in NFL history. From 2007 to 2009, St.Louis won six of 48 games, which soured the opinion of football in the city extremely. It was a time when the resolve of any fan would be tested. The skid has even seen devout fans, such as Walker, draw criticism for being tied to the club.

Walker, who works in the industrial coatings industry, remains steadfast in his active commitment to the club through these times. He’s entering his third season as a full season ticket-holder with the team and is often joined at the ballgames with his new wife, Kate.

Despite the future of the team being heavily debated in recent years, the self-described “die-hard” football fan — to which Mrs. Walker expands as far to say he has a “football problem” — sees it as his duty to do the most he can to be present and support the team, regardless of the heartache it has caused.

Walker’s clear in his dedication to the Rams, no matter the outcome.

“One of the things that teams point to when they are discussing relocating is attendance and lack of season ticket sales,” the 34-year-old says. “So my initial desire was to make sure that if they did move, I could only be mad at them. I did my job as a fan by buying season tickets and by being in attendance. There is not much more that a team can ask of a fan, so this way I have done my part.”

The Rams are entering what seems to be an era of renewed prosperity, armed with an exciting, young defense fueled by the six first-round picks afforded by their trade with the Washington Redskins for what would eventually become Robert Griffin III three years ago. However, if history has done anything, it’s created a cautiously skeptical fan in Walker, who’s traveled this road before.

“It is frustrating, because you see things like the team take Adam Carriker two picks before Darrelle Revis, all because they took Tye Hill two years before,” he explains regarding the sputtering expectations for the team. “I think they are finally going in the right direction now, but being in the division they are in now with Seattle and San Francisco, they are pulling a parachute in regards to how quickly results are shown in wins.”

If anything, following a losing team with talent can be the ultimate test of a fan’s pledge to the squad. And if there is anything that can’t be put to the test, it’s Walker’s fervor for better days to come for the Rams.

“Every year, I say I am not going to get too excited because of the potential letdown. At some point, there has to be a turnover, and you just have to hope that the team keeps improving and holding on until that point.”

“I love the whole atmosphere. It starts hours before the game in the parking lot and can end hours after in the same spot,” he explains. “I’ve loved the game since I was eight years old, and I think it is the ultimate combination of brains and brawn. The professional game is where you see the highest speed, the best talent and, with the Rams, it was finally like 'WE' have a team for it.”

One has to wonder if there is any way that enough could ever be enough. Could the hamster wheel of emotion the Rams put Walker through make him give up on the team that gave him so much excitement and hope nearly two decades ago? Is it possible Jack Walker ever sees himself giving up on the St. Louis Rams?

He considers the question in the distance for a few seconds and looks back with a careful confidence that belies what would be expected of a team that has had the Rams’ toils.

“If they stay here, there is no way I could leave them,” Walker simply says. “They will be my team. Thick and thin, I’ll deal with it as it comes.”

What more can you really ask from a fan than that?

9 Replies to “Meet The Fan: Jack Walker's Light At The End Of The Tunnel With The St. Louis Rams”