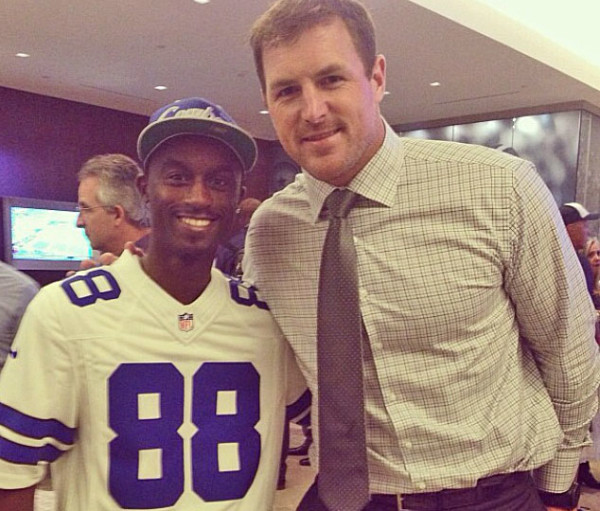 When America’s Team loses, he’s who the haters seek.

The plentiful groups of those who hold the Dallas Cowboys in highest disdain reach for their keyboards. Some are a part of his 7,900-follower base.

Tweets, photos, memes and more are sent to “The Tacky Black Guy.” Brandon Carroll knows the drill. The 24-year-old understands the angst.

“The Cowboys are one of the most hated franchises in all of sports because of all the hype they get,” Carroll says. “It all comes with the territory.”

He embarked on the territory as a five-year-old. Carroll’s favorite color was blue, and he loved the star. The youngster told his parents he would be a Cowboys fan.

Roland and Teresa Carroll weren’t fond of the idea. The couple lived in Washington, D.C., with their son, where Washington’s football team was the only game in town.

Of all the teams to pick, why did their offspring have to choose every burgundy and gold fan’s favorite dirty word?

“I never grew out of it,” Carroll says with pride.

He still owns VHS footage of his celebration when Dallas won its last Super Bowl in 1995. At five years old, the seed was firmly planted.

Now, he avoids the craziness he owned in his young days. Carroll “loves the team to death” but remains steadfast with his objectivity.

“I try to separate being just a fan and being a reactionary fan,” he explains. “A lot of people can’t do both.”

Distance he keeps from the Dallas fan stereotype is purposeful. He loathes the bandwagon jumpers and “delusional” members of the Cowboys supporters.

“There’s truth to it,” he says of the typecast. “Most any team has delusional fans, and a lot of Cowboys fans are the most delusional.

“There’s a lot of Cowboys fans you won’t see me associate with, on Twitter or off. I definitely get the stereotype of the people talking and holding on to five rings even though we haven’t won since 1995. I see it all the time.”

He sticks with the star right down to every bone in his frame. Carroll won’t root for any other NFC East team — not even in divisional play. None of his fantasy football lineups carry a Giant, Eagle or a member of the unmentionable team down the street from his Prince George’s County, Maryland, residence.

His parents’ team still irks him, mostly due to the fan base that surrounds his home.

“I hate the fans more than I hate the team. When Dallas plays Washington, it’s like the Super Bowl for them. They’ve been just out of control since they got (Robert Griffin III).”

When attention shifts to his own quarterback, Carroll knows his stance.

He believes Tony Romo is good enough to win any game he plays. However, weak defenses have hidden behind the most-blamed quarterback in the game.

“He’s the best we’ve had since Troy Aikman,” Carroll says. “You’ve got to help the guy out. We haven’t had a good defense since God knows when.

“Look at the Broncos game last year. We scored 48 points, and all anyone remembers is the interception at the end.”

He attends at least one Dallas game per year. Last season, he and his fiancée traveled to Texas to watch the ’Boys host the St. Louis Rams. When they come to town, he makes the short trip to Landover, Maryland, to see the grudge match against his neighbors.

This season, Carroll puts his team’s ceiling at 10-6 but expects 8-8. Until they prove otherwise, that’s the record he’s come to expect.

“After three straight years of 8-8, that’s what we are,” he plainly says.

The D.C. native hasn’t missed a game since 2000. He spends time with his soon-to-be wife and plays video games in free time.

A diehard St. Louis Cardinals and Duke basketball fan, Carroll can’t get enough sports. His timeline is full of observations about the games and which teams he thinks are for real.

In a day’s time, he’ll retweet an injury update with a take on what it means for the depth chart. The love even translated to his work.

Carroll is employed by the Washington Nationals in the team’s “President’s Club.” He will also work for the Verizon Center in the winter.

As if the games weren’t enough, a twice-a-year Twitter war with Washington fan DragonflyJonez becomes must-see entertainment. It sums up the bitter rivalry.

“Me and Dragonfly always go at it, but it’s all in good fun,” he says.

Many will glance over at Carroll’s timeline when the season kicks off. The followers will be quiet when Dallas wins and louder than an earthquake when they lose.

Public enemy number one will stay up all night with replies to those who tear down his team and his name.

It’s all in the game for “The Tacky Black Guy.” Without him, there’s no telling how Twitter’s NFL Sundays would survive.