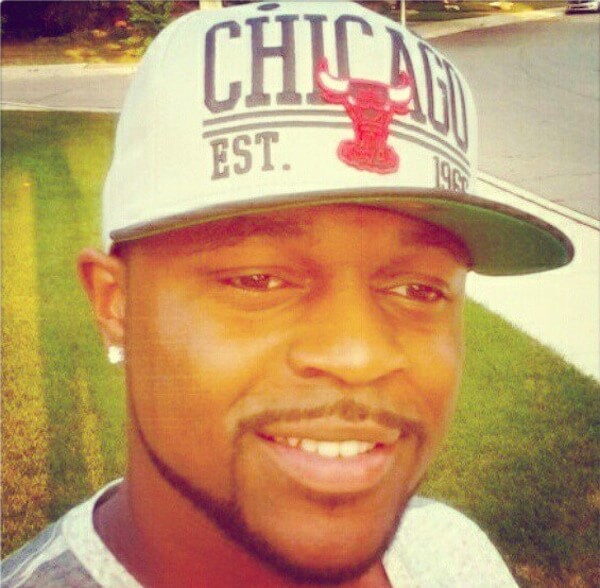 Here at The Sports Fan Journal, we hope to evolve and deliver something not found in any other corner of this here internet. We bring you Mark Trible and Dillon Friday's NFL Countdown project. A fan from each NFL team will be featured as we anxiously await the Sunday's full-schedule kickoff.

The city of Chicago, described in a word, is prideful. The musical history is rich. Food is so beloved in the Windy City that residents have a yearly festival for it dubbed "The Taste of Chicago." Much of the same can be said about its civil rights and cultural backdrops. Sports, however, are an entirely different animal.

Sports aren't a luxury in Chicago. They're necessity.

Very few professional franchises define their cities more than the Chicago Bears. It's an alliance many are born into. Hence the reason Jovan Poindexter identifies with "Da Bears" longer than he's actually been alive.

The brass-bound unity is indicative of a common theme of homebred Chicagoans. With the season starting Sunday at Soldier Field against the Buffalo Bills, excitement filters throughout the city from the Madison Mile to the South Side and every Harold's Chicken in between. Reservation, admittedly, does, too. 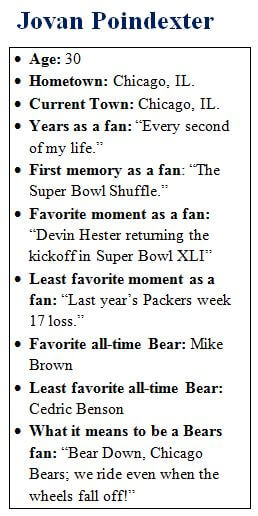 "I'm anticipating getting a chance to see this offense and embracing the reality of receiving a fresh start,” Poindexter says. "What I'm not (anticipating)? I'm dreading seeing our safeties."

Poindexter's on to something when he speaks of irrepressible excitement about Chicago's offense. Alshon Jeffery and Brandon Marshall combined for 189 catches, 2,716 yards and 19 touchdowns in the 2013 campaign. The duo represents arguably the most daunting one-two punch in the league and a large reason the Bears' offense is poised to ignite fireworks Sunday after Sunday.

Poindexter is of the belief their second year under offensive coordinator Aaron Kromer will prove just as productive — if not more — than their first season together. Last year, Chicago's 445 points were the second most in team history. The Bears also tied for second in points per game with New England.

"Having these two big, aggressive targets will allow Jay (Cutler) to make better decisions and have bigger windows to throw because the defense has to respect them," Poindexter says.

If the aforementioned food, music, culture and sports define Chicago, the weather does, too. The winters are bitterly cold, even for those who have called the city's wind chill their extended cousin for decades.

Don't expect to see Poindexter at Soldier Field once the temperatures turn glacial. Not this season, next season or ever.

"Hell no!" he exclaims when asked what travels through his mind seeing fellow Bears fans brave the elements. "I love the cold, but I'm smarter than that. I enjoy the Bears in 1080p with hot chocolate and a Jay Cutler Snuggie."

In fact, watching the Bears anywhere in public is out of the question. While many descend upon sports bars with like-minded cult followers, the exact opposite is true for Poindexter. Social by nature, he becomes introverted on game days. He has a good reason, though.

"I can only enjoy the Bears at home. I get too emotional and angry. I'm afraid any respectable establishment would call the authorities on me," he says. "My brother and I usually grab some food and tune in to the game after saying a quick prayer."

Local Chi-Town pubs are in luck. Their future is set. Poindexter won't be there to ignite total havoc when, or if, Chicago drops a heartbreaker.

As for the NFC North, its future is anything but etched in stone. Green Bay remains the division's favorite, but defensive flaws prove to be the Packers' Achilles heel year after year. The Lions could be the X-Factor and still have the freak of nature named Calvin Johnson, but they also have new head coach Jim Caldwell who, according to Poindexter, "has to prove to me he can instill discipline." Adrian Peterson is a threat in Minnesota, but the Vikings aren’t much of an intimidator when it comes to supremacy in the division.

The Bears and "NFC North Champs" are there for the taking. It was 45 seconds away in 2013 before Aaron Rodgers-to-Randall Cobb happened.

Everything in football is a process. First is the division championship. Second comes the conference championship. Third — if Poindexter’s lucky — years of blood, sweat, infinite curse words and tears will result in the Lombardi Trophy.

Remember, sports aren't a luxury in Chicago. They're part of the city's lifeblood. Asked which individual championship the Second City craves the most — the Bulls, Bears, Blackhawks, White Sox or Cubs — his answer is as short as it is powerful.

"The Chicago Bears are without a doubt number one."

"Will Leitch Protects Himself From The Arizona Cardinals"