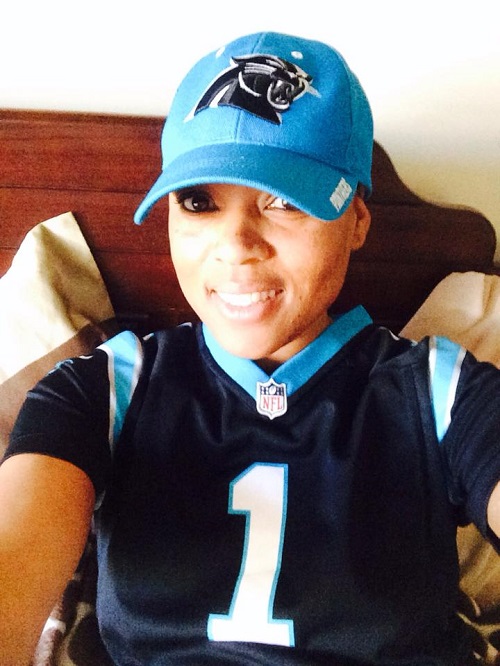 For the over-35 crowd in the state of North Carolina, fanhood in professional football is subjective. There were no local teams to like for so long. Many Carolinians were led to the two closest teams to the region, the Atlanta Falcons and the Washington Redskins. It seemed pretty simple that many people would like those teams, but it wasn’t cut and dry. The Dallas Cowboys and the Pittsburgh Steelers consumed local television, which created more fan bases.

For Tanyetta Thompson, love for the Carolina Panthers would come as she headed off to college. There are plenty of women who love football, but Thompson is different. She was actually good at football. No, she didn’t play for any teams, but she played with the fellas in the streets. 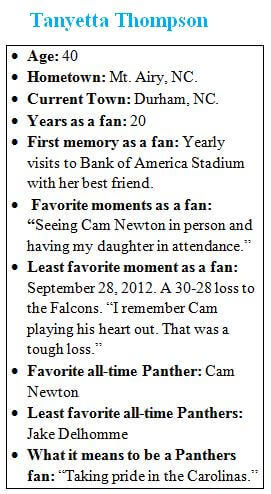 She was often picked over many of the dudes in the neighborhood growing up because she was tougher than a two-dollar steak and faster than a greyhound.

Thompson was a track star in high school and took her talents to Western Carolina University. During her junior year of college, the state of North Carolina got a professional football team, and her union with the Carolina Panthers became real.

However, her love of the Panthers intensified with the addition of Cam Newton.

“I have always cheered for the home team, but I completely embraced the Carolina Panthers about four years ago," Thompson remembers. "I feel Cam Newton brought that element — excitement — to the Panthers that the brand was missing, with his versatility. Once the Panthers team embraced him as the leader and followed his lead, I feel that’s when they became real contenders for a possible Super Bowl.”

Her passion for the Panthers quarterback runs deep.

“Cam Newton was the first Panther player whose jersey I actually purchased.  I know I am old enough to be his mother if I had had him at 15," Thompson jokes about her obsession with the signal-caller. But she's quick to praise Newton's impact off the field as well. "On a serious note, he is a humanitarian that is super active in the lives of our youth."

Thompson's admiration of Newton, in other words, exceeds his physical appeal.

"Seriously though, Cam is an attractive young man, but that’s about where it stops for me. The infatuation and attraction I exhibit through my hashtag #CamCougar is just a joke because of our age difference. I enjoy his contributions both on the field and off," she says. "I follow the charitable activities in which he participates, and I take members of my family to participate in activities that he holds in the communities of Charlotte, even though it is not always convenient.

"He is passionate about the youth of today, and with everything that is going on, we need more of that. At the end of the day, I wholeheartedly respect him for what he does and for the role model that he is. Our children need this.”

Cam isn’t the only Panther player whom she has love for.

“I have always liked Steve Smith even though he has moved on and DeAngelo Williams," Thompson says. "Not only are these three guys super-talented, but they are also powerful once they get the ball in their hands.”

Now that the Carolinas have their home team, it's likely that there will be a fewer Steelers, Cowboys, Redskins and Falcons fans out there. Thompson will always have more love for the home team. With Newton leading the way, the Panthers will soon create an atmosphere that is genuinely born and bred.