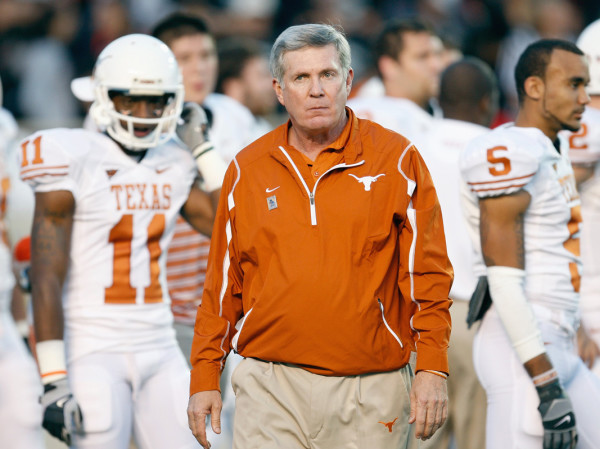 In the end, the numbers 30 and 20 were the ones to doom Mack Brown.

Not that glaring win-loss record against Bob Stoops and Oklahoma.

Not that 1-2 start followed by a roaring six-game win streak and finishing the year out 1-2 against top talent in Oklahoma State and former conference doormat turned eventual champion in Baylor.

Not by lack of recruiting “star talent” like Johnny Manziel, Robert Griffin III or Jameis Winston and believing they were best-suited in the backfield that talks more in terms of a 3-4 as opposed to the spread.

Just 30 wins and 20 losses since the night the state of Alabama assumed dominance over the rest of the country in college football.

Sources have one of college football’s major faces set to resign later this week, all but opening the door for the greatest college-coaching search we’ve ever seen. You thought Notre Dame finding Brian Kelly was rather “normal”? This is the state of Texas version of nominating a new pope. One that many skeptics and insiders believe just got hit in the kneecaps by a 100-yard field goal return to deny him a chance for a third straight national title.

To be fair to Brown’s legacy, there was no clean way this was going to end. Divorces are messy, especially when the divorcee is a head coach who drug college sports’ most profitable school out of the darkness and mediocrity that John Mackovic put it in even after having James Brown and Ricky Williams on the squad. Mackovic got the boot after a 4-7 season, a season in which the school got dusted 66-3 by UCLA.

Brown righted the ship in Austin, established a sense of dominance and consistency that could only truly be mirrored by Bobby Bowden’s run of 14-straight top five finishes. A national championship in Texas is the equivalent of winning a war. Brown got one with Vince Young, but the natives got restless — and greedy.

Bad luck befell the Horns in the title game against Bama in 2009, and the three-year window of mediocrity kicked off soon after. The moment former Texas AD DeLoss Dodds, one of the more powerful men in the state much less in college football, chose to step down, Brown’s departure was imminent.

Sixteen years is indeed 16 years — but the Board of Regents figure unlike, Andre 3000, 16 is enough.

You lose too long and too often in this day and age of college sports, your job is soon to be called for. Especially if you’re at one of the glamor schools in the country. And it will indeed be messy.

The moment Brown picks up that last box from his office desk, the eyes of fire are going to shift across the Red River and at Bob Stoops, who figures to be the next legendary figure in the Big 12 to find an ax in front of him if he doesn’t appease a rabid fan base that believes in national championships, sustained dominance or bust.

Much like Bowden out in Tallahassee, the end seemed to be more by force than by grace. Bowden got into it with his athletic director, who was tired of seeing 8-5 and 7-6 finishes from a team loaded with future NFL talent. Brown damn near had it painted on his door when Ole Miss punched UT in the mouth back in September.

There was no real way Texas was going to immediately fix things up after that disastrous five-win campaign in 2010. Recruits had finally grown to either leave the state or go with far more intriguing prospects at A&M and Baylor. “But we’re Texas,” boosters exclaimed as top talent bounced through their fingertips via their own gaffes and errors. RGIII, Manziel, Winston, even Cam Newton counts since he was busy putting the final touches on a JUCO national title at Blinn — no more than an hour and a half away from the UT campus.

Brown’s résumé as a Hall of Fame coach is already secure. He’ll be given a proper sendoff via a banquet and probably a statue in his honor outside of the stadium, regardless if the school gets buried “Red Wedding” style by Oregon in the Alamo Bowl. What happens next following him is unclear. Texas has fatter pockets than any other school in the country, almost willing to put up the entire GDP of Tuscaloosa just to woo Nick Saban over to lead the Longhorns back to glory. But to say that’s a slam dunk hire is an entirely different matter. Remember when Will Muschamp was Mack’s presumed successor? How long did that work?

The state capital is filled with inflated egos, and new AD Steve Patterson will have to deal with them all. The biggest? Whoever may become the new face of Texas football. Because the nicest guy the school may have had since Darrell K. Royal is about to hit the door.

One Reply to “On Mack Brown, Being Nudged Out And The Future Of Texas Football”