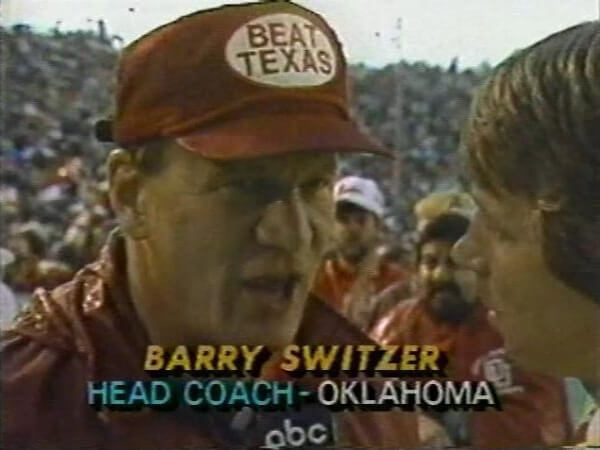 This weekend’s college football slate will feature something of lore and mythology. A game played on the premise that the winner owns the Red River until next time. Despite the hype, many of the recent games have been blowouts between the Horns and Sooners.

It got me to wonder what the big deal is about this game known as the Red River Rivalry. It’s been on my screen before and normally warranted a channel change. Maybe it’s the way those burnt orange jerseys clash with that dark red helmet. The nonstop fight songs blaring in the background would make John Philip Sousa proud. Perhaps this rivalry is made for band majors.

All it took was one phone call to an Oklahoma alumnus to understand that the game is bigger than the small, thimble-sized vision of this East Coaster.

There are histrionics at play, he said. A Sooner State politician once declared war on Texas over a bridge. There’s Barry Switzer’s red cap with the words “BEAT TEXAS” embroidered across the front. This is about two states with disdain towards one another — especially towards Texas. And, the game is about even more than that.

The Cotton Bowl houses the teams in the middle of the Texas State Fair, he explains. A fair? That’s it? No, of course it’s bigger in the Lone Star State. There, the state fair lasts for not one week, not two, but three and change. It’s the event of the year for the folks involved, filled with fried beer and a giant, 52-foot tall cowboy named Big Tex. Poor Mr. Tex burned down last year. Grab your breath back — he’s been rebuilt.

A site for a football game is in the middle of a fair. If you need some fried beer at halftime of the big game, you’re allowed to leave and re-enter the stadium.

While on the topic of the stadium — located nearly midway between the two campuses — he states an intricacy that makes the game even more tenacious. The fans are split right at the 50-yard line. You might have known that. What you likely didn’t know is there’s no aisle at the 50-yard line seats. Red next to Orange and Horns next to Wagons. The line is clear and distinct, and there’s nothing separating enemies.

Somewhere, on the plains of Texas or the swirling winds of Oklahoma, people have counted down the minutes to this game. There are citizens whose mere existence relies on the result. I’ve never been, but I hear it’s hot. I heard about the heat and the wind and the prairie and have to imagine there isn’t much bigger than Saturday’s game.

What started as a column asking why anyone should care about Saturday’s game morphed into fascination. I don’t like Texas and never have. I like Oklahoma slightly less, only because Bob Stoops strikes me as a sad man with a complex. Plus, the Sooners have been better recently — reason enough to dislike a college football team.

I know a few fans of the schools, but none are physically close enough to me for me to witness their angst. There’s little frame of reference. Still, I’m intrigued nonetheless. I think of rivalries dead and gone and the next dozen that will disappear.

I think of Penn State and Pitt renewing a rivalry that never should’ve ended. I remember Nebraska and Colorado’s final Saturdays. One look down the list tells me to embrace the rivalries that still exist. Put yourself in the nostalgia, the old man in my soul pleads. Make it so the game carries importance to you as it does to so many in the Southwest and Midwest. Do it for no other reason than to feel a part of football’s oldest frontier.

When the drums play and the trumpets won’t shut up, usual cringes might turn to a bit of appreciation. As the pan shot of the stands shows those in orange holding up the index and pinky, laughter might turn to admiration. The shot of the upside-down fingers from people in red may tune me in to the distaste.

We can’t begin to appreciate it at its largest value unless we’re involved in the rivalry firsthand. There’s no way to know how it feels walking through a giant state fair, into a half-separated bowl of fans with history and geography serving as their only borders. To be part of that must be a special honor. At least that’s the way it sounded to my virgin ears.

There’s no more wishbone. No more Switzer, no more Royal. Earl Campbell and Billy Sims, you’re just figments of our imagination with assists from film strips. Years have passed. Now, this seems like the last rites for Mack Brown. Next season will likely welcome a new coach to the battle. However, a win over the Sooners might just save Mack yet.

A giant bull and a wagon and gee whiz, I don’t know how much more anyone could want. The thing is, I still have no rooting interest in the game. What’s learned is that any one of these high-strung rivalry games can become a big deal if you talk to the right people.

Where the Sooners end, the Horns begin. The same is true vice versa. We’ll see what happens on Saturday afternoon and who gets a year to brag. Maybe after it’s over, I’ll better understand why Switzer wore that cap. At the very least, I’ll do my best to partake in something special happening thousands of miles away. Either way, I’m the chicken who’s only involved — not committed.

One night on the job, I watched a close rivalry game. The losing coach told me the tight loss “feels like getting punched in the face and kicked in the groin at the same time.” I can’t imagine how losing to Oklahoma feels in San Marcos. It’s hard to figure how bad life would be in Pottawatomie County if the Horns pulled out a miracle on Saturday.

It seems like it would feel something like that simultaneous dual-force trauma above and below the belt. My recent lesson about the rivalry makes me imagine it feels even worse than that.