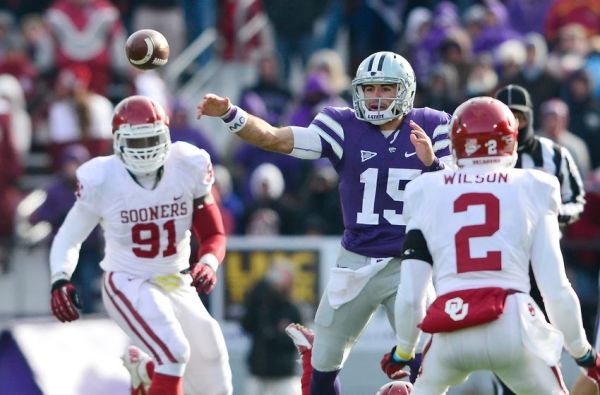 I have been giving the SEC and the ACC a lot of love in these segments, but I haven’t really given the Big 12 anything until this point. Today that changes as the game of the week features #14 Kansas State and #11 Oklahoma. When you think Big 12 football, you immediately think Texas, TCU and Oklahoma. Very seldom do you acknowledge the fact that Kansas State seems to stay in the equation since the hiring of Bill Snyder. Snyder took a team that was a doormat and turned it into contenders for the conference title year in and year out.

As good as Snyder has been, he hasn’t always fared well against the Sooners. Oklahoma has derailed many of the Kansas State runs for championships in conference play, and if the Sooners want to stay in the hunt for a championship this season, they will need to do so again.

Bob Stoops has had plenty of success against the Wildcats, but he also knows the importance of the game this week. The winner of this game stays in the hunt for a title while the loser is relegated to a bowl game that will generate money but will not likely have any argument to get in the four-team playoff this year.

Kansas State has an explosive offense that is putting up just over 40 points per contest. Senior quarterback Jake Waters is the catalyst behind the air and ground attack of the Wildcats. Waters has 1,206 yards passing and 320 yards rushing. He leads the team in both statistical categories. Sophomore Charles Jones offers a little support in the running game to compliment Waters, giving them a potent but deadly running game.

Oklahoma prides itself on defense, but the Sooners have an offense that can get it done as well. The Sooners come in averaging over 40 points per contest as well, led by sophomore quarterback Trevor Knight, who has amassed 1,503 yards passing but has been plagued by the interception in big moments at times. The young quarterback has been helped tremendously on the ground by Samaje Perine, who has amassed 568 yards on the ground. It also doesn’t hurt to have junior Sterling Shepard on the outside breaking down the defensive secondary while hauling in 34 catches for 714 yards and four touchdowns.

Both teams have defenses that have been enigmatic. Both teams give up a little over 21 points per contest. And both teams have had issues in big games containing the other team’s best player. Oklahoma has been getting exposed in the air since entering conference play. It appears that teams have figured the Sooners defense out and are capitalizing on the fact that they can’t stop a solid passing attack.

Picking a winner in this one is tough. Rarely do Stoops teams lose more than one game before the postseason, but this year’s squad is a little different. I think this one can very well come down to special teams play, and Kansas State has the edge in that area so I am picking the Wildcats to upset the Sooners. Watching Texas shred the Oklahoma defense last week with a quarterback who is athletic makes me believe that Kansas State can do it as well.

Either way we are in for a good one. Make sure you tune in and enjoy all the great games on the air this weekend.