We are back with another week of the Kaepernick rankings. If you’re not up to speed, this is a weekly series that lowlights bad quarterback play across the NFL. At this point of the season, we’ve witnessed many starting and backup quarterbacks that should not be on a professional football field.

Despite commissioner Roger Goodell's recent claim about the free agent quarterback, it’s been a clear sign that Kaepernick has been blackballed from playing football.

Given the number of injuries to quarterbacks and with sputtering play across the board, there is no reason Kaepernick should stay be unemployed. Although he isn’t displaying his talents on the field—he’s doing pretty well of it. He continues to do philanthropic work in the community and as a result of that he was not only named GQ Citizen of the Year, but was presented the Sports Illustrated Muhammad Ali Legacy Award. While scoring touchdowns are awesome, Kap’s efforts to combat racial injustice has to feel just as good, if not better.

Now that’s out the way, let’s dive into Week 14 of the Kaepernick Rankings. 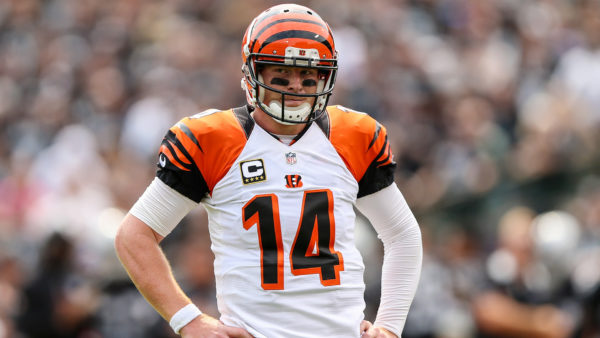 Jay- Z once said, "men lie, women lie, but numbers don't." When looking at Dalton's numbers, he seems to be a quality starting quarterback, but the eye test says differently. Dalton’s tenure in the Queen City could be coming to an end sooner than later. The seven-year veteran has been a model of inconsistency, and because of his quarterback play, the Bengals continue to be one of the most unpredictable teams in the league.

There are times where they look like world beaters and there are stretches when they revert back to the dreadful days of when they had David Klingler at quarterback. With an AFC Wild Card bid in their sights, the Bengals lost a winnable game against the Chicago Bears and from the looks of it, their playoff hopes are close to being dashed.

Jets fans are probably not excited that Bryce Petty is taking over as the starting quarterback in wake of Josh McCown’s season-ending injury. If this past Sunday was a warning of how things will look going forward, I’d be worried. The time is now for Petty to show he not only belongs in the NFL, but as someone who can truly lock down a starting job. The Jets do not have a quarterback of the future, and if Petty plays well, he may hone in on that spot, but it’s not expected for him to play at a high level.

Like Jameis Winston, Marcus Mariota is having a forgettable season. After an inspiring sophomore campaign, the former Heisman Trophy winner was pegged to climb up the quarterback hierarchy, but his play has regressed.This season, Mariota has been a turnover machine with 14 interceptions. His 10 touchdown passes are a significant drop off from last season’s total of 26. Despite Mariota’s inconsistency, the Titans are still in play to make the postseason, though making their first playoff appearance in nearly a decade is far from a lock. If there isn't a playoff team in Nashville, Mariota would have to shoulder the blame.