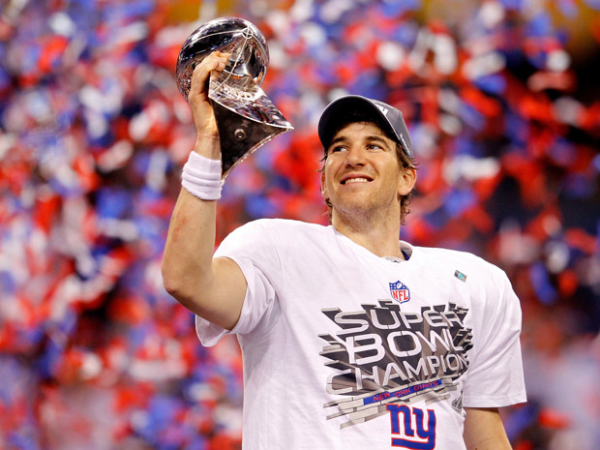 Several people have been critical of the greatness that is Eli Manning. Anytime I have been asked to do a quarterback list, I never let the fact that the man wasn’t flashy and didn’t have but one title deter my thoughts about his ability. The way I see it, the quarterback can only lose games when they play horrible, and when they are the reason you lost. This has not been the case in the career of Eli Manning.

I made the same argument about the greatness of Dan Marino. If he just wins one Super Bowl, he goes down in history as the greatest that ever played the game. We have never seen a man with a release as quick as “Book’em Dano” with that type of precise accuracy. To further validate Marino’s greatness, he hasn’t had a wide receiver make the pro football Hall of Fame. How does that happen when you throw for more than fifty-thousand yards?

People were afraid of crowning Eli, because he plays with such a puzzled look on his face. Sure, he often looks confused, and he often plays a little erratic, but when ever there is a big game, more times than not, Eli delivers. Sometimes you lose games because of other areas of the game, but Eli seems to get blamed quite a bit when the Giants aren’t successful.

Look at the guys that he has made great in his career. David Tyree doesn’t even exist anymore and look at the other Steve Smith. Does anyone even know if he can catch a ball anymore, as he has become obsolete in Philadelphia? This year, the Giants got hot at the right time. In fact, you can say that winning those season-ending games against the Jets and Cowboys gave them the confidence to play well in the playoffs.

While other teams were chilling and resting, the Giants were playing for their lives to get to the playoffs. Eli now has a couple of Super Bowl Championships and a couple of Super Bowl MVP trophies to go along with them. A lot of people will hate to say it, but he now belongs in the elite category and is worthy of the top five ranking of active quarterbacks in the NFL. This entry is not to pat me on the back for saying it all along, but it is written to state what everyone should know about Manning. Eli Manning doesn’t have the best stats in the league, but if we are going to praise Tim Tebow for winning, then we have to hail Manning, as his stats are better and he does it on a bigger stage and, more importantly, he gets it done in the fourth quarter.  Face the facts; the man has proven he is clutch and he delivers.

Sure, he threw a ton of interceptions this year, but most of them were because his receivers had games where they couldn’t catch herpes in a whore house and most of them were deflections off the receiver’s hands right into the hands of the defense. When they stopped dropping balls, they started to look unbeatable.

Even if you don’t want him to wear the crown, take note that he has more championships than Drew Brees, Peyton Manning, and Aaron Rodgers. So maybe he can take his place in the top five quarterbacks in the league. If you disagree, that’s fine, but don’t let me see a choker on your list in the near future.

7 Replies to “Just Call Me Elite Manning, 'Cause I'm Clutch”