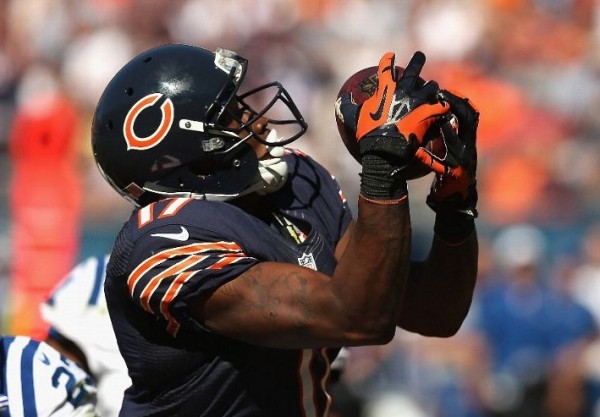 The Bears are seemingly not okay with mediocrity. They have had a plethora of mediocre wide receivers on their team the past few seasons. Guys like Devin Hester, Devin Aromashodu, Johnny Knox, Earl Bennett, and let's not forget, the Roy Williams experiment have given the Bears a stigma on offense.

The Bears have had to lean heavily on Matt Forte to do the running, the receiving, the hot dog vending, and the ticket sales the past few seasons. Now they have weapons. Nope, not the Converse Weapon that Magic Johnson and Larry Bird made famous, but weapons outside.

Brandon Marshall has been reconnected with Jay Cutler and, quite frankly, the two of them look like they have never been separated. Marshall seems to wear out his welcome most places he ends up, but he and Culter seem to be cut from the same cloth. They seem to read each other well and understand how to connect when it matters most.

Marshall has had plenty of off the field incidents, but he can play and play at a high level. Marshall is the perfect season for the Chicago weather as well. To be productive in a city like Chicago, you have to be big, fast and have good hands. All of those things are Brandon Marshall.

When you think of guys built for a particular city, Alshon Jeffrey seems to be a perfect fit for Chicago. He doesn’t have to shine early, because he plays alongside Brandon Marshall, but he seems to be ideal for the city and the weather. Even though he spent his college days in the south playing for the University of South Carolina, Jeffrey is built for the cold weather in Chicago.

Jeffrey is a big guy and he is fast, sneaky fast. Chicago can continue to appease Devin Hester as he may start ball games as the number two receiver, but the reality of the situation is that Jeffrey will be in the game when the Bears have to throw the ball.

Week one showed us why Jeffrey will be valuable. He is an asset on the goal line, and on third down and less than five, he is an automatic first down. Not many rookies come into the NFL with his skill set and most don’t end up in a situation that is perfect for them. Jeffrey just happened to fall into the perfect team at the perfect time.

Call it luck or call it calculated, but I would be willing to bet that the Chicago Bears didn’t realize what they were getting when they made this pick. If they did, shout out to the scouts as they got this one right.

All that being said, no one is happier about all of this than Bear's fans. Matt Forte will now have open running lanes as you can no longer stack the line of scrimmage. Jay Cutler should have a Kool Aid smile on his face for years to come. Lovie Smith should be thankful that he now has an offense to match his vaunted defense.

The Bears can make this exciting in the NFC if they do what they are supposed to do.