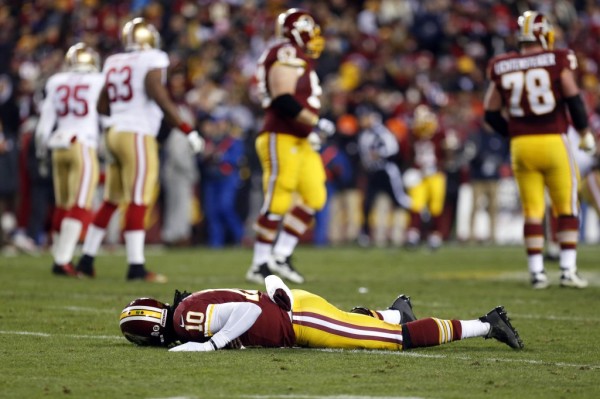 I read, listened to and watched people talk about it last year, but I didn’t believe it.

Or perhaps I didn’t want to believe it.

Perhaps I got so jaded in the fact that, for the first time in years, we Washington fans had a player who generated excitement week in and week out. Perhaps I, like many other fans, got spoiled in the fact that “we” ran the table to the NFC East division title and hosted a home playoff game, setting the foundation for 10-plus years of contention.

I ignored the signs.

I refused to listen when people said the Shanahans were going to ruin Robert Griffin III’s career before it even got started. I quickly fired back the stats to folks who said that, although RG3’s talents were something we’d rarely seen before in the NFL, there were still some mechanical issues that he needed to work on before we even put him in the “elite” category. I applauded RG3’s “swag,” foolishly ignoring the fact that the overconfidence and ego may come back to bite him. And, although last season ended on a sour note, I proudly boasted to friends and the like that a 12-4, 11-5 record was attainable.

I’ve waited for about three weeks to finish this piece — in part because I still believed. Silly me. I waited and put off on completing paragraphs because I saw flashes. A play here and a play there would give me hope that maybe, just maybe, that magical run of last season could be duplicated and the Redskins could make an improbable run and compete in the weak NFC East.

It seemed at times possible — until I would inexplicably see Alfred Morris on the sidelines in short-yardage situations. And last night, in a nonchalant, effortless loss at home to the 49ers on Monday Night Football, I accepted the fact that this season is over. Done.

Now, before you scroll up to X out of this window, let’s be clear: There are plenty of directions in which you could point the finger. RG3 has not been himself, or at least not what we saw last year. The defense is atrocious, the play-calling is at best baffling and the special teams is God-awful.

The great Bill Parcells once said, “You are what your record says you are,” and for the Redskins, they are 3-8. A very bad 3-8.  And it’s OK to point that out. It seems that some of my fellow fans of the burgundy and gold refuse to accept the reality of the situation. It doesn’t make me, or anyone else, less of a fan because we want more of our team and those in leadership positions. It’s hypocritical to think that you can celebrate the good, yet put blinders on when the bad happens. Criticism and honest critique don’t mean you want the backup in the game or are giving up on the franchise you’ve rooted for your entire life.

So the question now is, what’s next? Are RG3’s struggles a result of a lingering knee issues, or is he really regressing as a quarterback? Is Mike Shanahan still a two-time Super Bowl-winning coach, or is he Jim Zorn 2.0 who is putting his young QB at risk with every call his son Kyle makes? With no first-round draft pick in 2014, does Dan Snyder have any patience left? Can the front office make the necessary changes, ones that everyone can visibly see need to be made, this offseason?

What once were questions I refused to address can’t be avoided now. If nothing else, this season has been a lesson in humility. Our friend Bomani Jones wrote months ago that “Griffin has been treated like an indestructible superhero, and he’s expected to behave like one, even though we’ve been made perfectly aware that he’s no such thing.” Griffin has experienced a humbling. Redskins fans have been let down. The team as a whole has underachieved to this point.

So we’ve come to a point that has seemed all so familiar for the past 20-plus years — we’ll get ’em next year. Only this time, it hurts a little more because the experience of last year made us believe this time would be different.

And for the record, I’m still all in — just for next season.

5 Replies to “An Inconvenient Truth: On Robert Griffin III, The Shanahans And Being All In … For 2014”

An Inconvenient Truth: On Robert Griffin III, The Shanahans And Being All In … For 2014