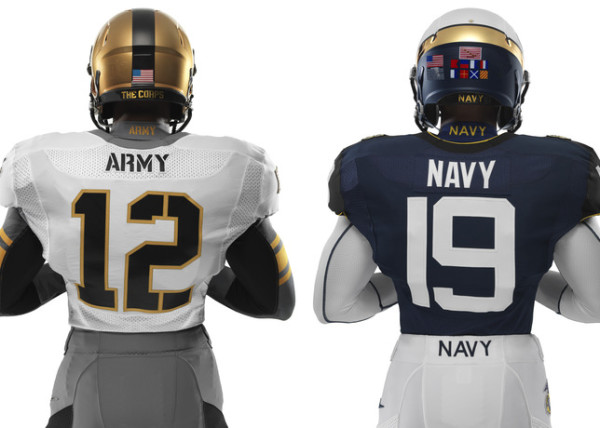 This year will mark the 114th time that the Army and Navy football programs play against each other. As much as we all love tradition, it never hurts to switch things up every now and then. Fortunately the good folks over at Nike feel exactly the same, as they are providing both teams with a much needed uniform upgrade. Per the folks at Nike Inc., Nike Football design team created the uniforms to highlight each academy’s rich heritage and drawing inspiration from key historical figures within each respective military branch.

Anyone familiar with Nikes take on the look of the college game need only reference the always enchanting uniforms of Oregon’s football program to get an idea of what to expect. The house that Phil Knight built always seems to deliver when it comes to revamping a team’s look. The Army and Navy teams will be wearing Nike Pro Combat designed jerseys when they take the field against each other. The uniforms offer a modernized take, while paying homage to the prestigious histories of both of their respective forces. 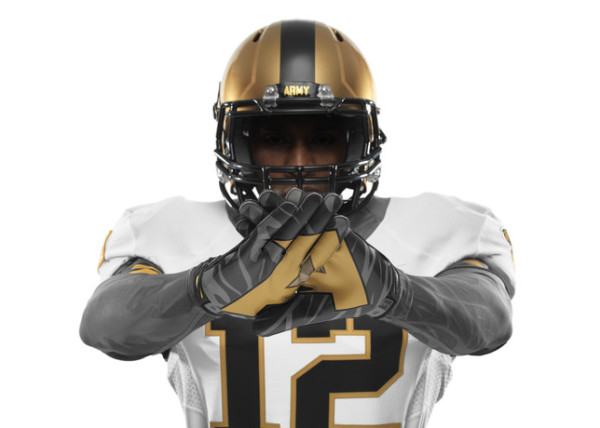 The Army's uniform draws inspiration from General Winfield Scott, also known as "Old Fuss and Feathers". The sleeves of the Army jersey will have elements of the West Point decorating the sides representing peace (olive branches) and strength (oak leaves). On the Navy side of things you can expect a simple, yet sleek uniform that captures their "never say die" attitude. A Naval officer's cover will serve as the helmet design, while the base layer of the uniform is a navy colored top with the words "Don't Give Up The Ship" are written across the front, underneath their Navy embroidered jerseys. Of course as they are all one nation, there will be some similarities to look for. The two teams will share some form of unity. Both will be wearing Nike Alpha Pro Cleats as well as Nike Vapor Jet 2.0 field gloves, in their respective colors of course.

The two teams will face off on December 14th at Lincoln Financial Field in Philadelphia.

One Reply to “Honoring The History: Nike Unveils Army And Navy Uniforms For The 114th Clash”