I know, I know. If anyone knows, it’s me. We’ve barely begun conference play. There hasn’t even been a mid-season firing yet. There are more possible outcomes than we can realistically account for. We’re just getting into the swing of things. If it wasn’t clear before, those precious fall Saturdays have officially arrived. The lengths of days have started contorting with the changing of the seasons and game days get here before you know it. On the eve of the first weekend of October, we’re far enough in the season to know which players are legitimate threats to strike the pose in New York, but it’s still early enough for everyone to look like a shoo-in before the inevitable crash-and-burn.

So here we are, the second-best list of the week, in no particular order. 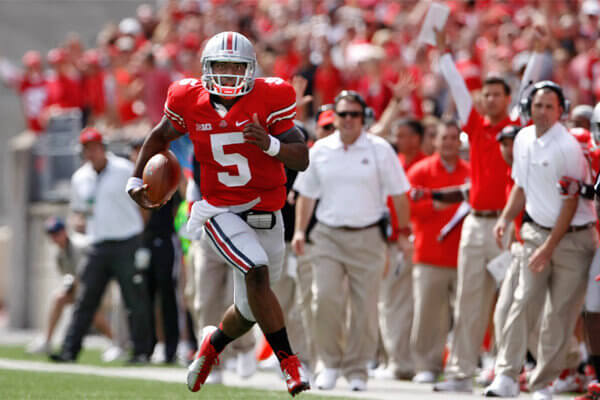 10. Braxton Miller – Even though this season means little more than bragging rights for the Buckeyes, and it couldn’t happen to a better coach, Miller has been a huge glimmer of hope. Seriously, you can’t go a week without seeing a highlight-reel play from this guy. With a big performance over Nebraska, running the table in-conference, beating rival Michigan, combined with a win over a tough Michigan State defense; there’s no reason to doubt Miller makes it to New York for the trophy presentation.

9. EJ Manuel – Quiet as kept, Manuel has kept the Seminoles afloat and looked pretty damn good doing it. He doesn’t have the numbers that some guys rack up, but he’s completed 73% of his passes and thrown nine touchdowns to one interception. He’s not in a wide-open offense like Geno Smith, but it’s still nothing to scoff at. The question is, will Manuel and FSU derp yet another title shot away? The fate of Mr. Manuel’s Heisman aspirations lies in the balance.

8. Jarvis Jones – Not only does Sackman Jones strike fear into the hearts of quarterbacks, eat Chik-Fil-A on Sundays, and promote the general welfare, he does it all while making Lane Kiffin look like even more of a douchebag, which is all that matters, right? In a perfect world, Jarvis could deliver his Heisman acceptance speech via Skype from Stockholm, as he prepped for his Nobel Laureate lecture in physiology. Alas, it’s not a perfect world, so we’re stuck with this molder of men. Barring unforeseen performances to end the year, Jones will be a Heisman snub, relegating himself to strictly defensive awards.

7. Marcus Lattimore – It wasn’t enough for Marcus Lattimore to rack up respectable accolades to his name: 2010 Sporting News Freshman of the Year, 2010 AP All-SEC First Team, etc. He refused to settle for being the most intimidating dude wearing cornrows not named Project Pat. He’s focused on bigger and better things, like taking South Carolina football places it’s never been before: A BCS berth. After tearing an ACL last year, Lattimore is back up to speed and ready to prove he’s down for his crown, mane. Unfortunately for him, aside from the Cocks’ suffocating defense, he won’t have much help getting to New York.

6. De’Anthony Thomas – Another finalist who made Lane Kiffin look foolish, the Black Mamba has been a message board legend ever since he got his nickname from Young Eggs Himself. The rest of the world is finally getting their introduction to college football’s premiere big-play threat. This year, he’s averaging 9.9 yards per touch, and a touchdown every 6.25 touches. Insane...no other way to describe it.

5. Mant’I Te’o – If there’s any feel-good story better than Jones’, it’s Te’o. Not only did he stay in school to lead Notre Dame to their best start since 2002, he did it all despite losing his grandmother and girlfriend in a three-week span. His play on the field never faded, he picked Denard Robinson off twice in a 13-6 victory over Michigan and made 12 tackles in a 20-3 win over Michigan State. Te’o has the most opportunities of anyone to make his case. He’ll face Miami in Chicago tomorrow, Stanford next week, as well as Oklahoma and USC before it’s all over with.

4. Aaron Murray – I don’t even want to include Murray on this list, to be honest. I’m a Georgia fan. I already consider it bad luck that so many ESPN talking heads believe in us this year. Now that he has a productive running game to fall back on, along with a deceptively deep receiving corps, he can really shine. He’s already shown more resiliency than a year ago, and improved his completion percentage to 68.5. Don’t tell anyone, but two more touchdown passes would give him the school’s touchdown record. This weekend’s showdown in Columbia and the annual Cocktail Party in Jacksonville are the main hurdles keeping the Dawgs away from a second straight SEC Championship game appearance and, by extension, Murray away from Heisman contention.

3. Matt Barkley – The Blonde Bomber is holding down the obligatory USC quarterback slot in the Heisman discussion, and he’s doing a damned good job of it. Aside from the (expected, at this point) letdown at Stanford, he’s been as advertised, and the Trojans could still run the table. Oregon (potentially twice), at UCLA, and Notre Dame will be critical showcases.

2. Collin Klein – Optimus Klein is one of those candidates that seem to will their team to victory, a battering ram of a dual-threat QB who I was totally unaware of until I made the mistake of playing against Kansas State on NCAA 13.  Dude can run the ball, throw the ball, AND he make the Tebow jump pass. Add in the fact that he has a great nickname? And just so happens to be have Kansas State in the Top 5? No reason to believe he won’t make it to NYC barring a meltdown of epic proportions. A good showing in a duel against Geno Smith in Morgantown on the 20th would all but cement his status as a finalist.

1. Geno Smith – This kid’s got the most going for him right now. Not only did he do the world a favor and take Clemson behind the woodshed on national TV last year, he’s lived up to the resulting hype this year. 20 touchdowns, ZERO interceptions. This week’s matchup in Austin is his first legit test.  If Smith keeps the ‘Eers offensive onslaught on track this weekend, the Heisman will likely be his to lose.

3 Replies to “Do The Heisman: The Way Too Early Heisman Trophy Power Rankings”