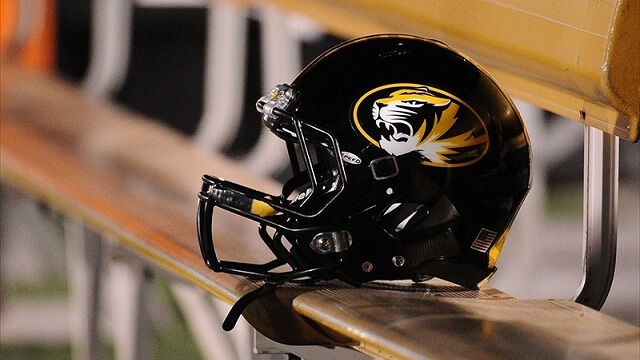 Last year, I described the coming of the Missouri Tigers to the SEC as being similar to the first day of school. However, after a year into said new school, which just happens to be the most dominant entity in major label American sports, the SEC, a few things are very clear that this is not just a brand-new campus; it is a whole new damn game. The classes are the same length but much faster. You can’t afford to not study, because you will fail. And mainly, being the new kid comes with as much of a target as being the most popular kid in school. And when those two meet, really bad things can happen.

But for the northernmost outpost of the conference, year two is basically just a continuation of year one, whereas it is still an initiation. Not much good came out of last year, except for now former offensive coordinator David Yost falling on the sword for his numerous war crimes, including five receiver sets on the goal line and the eradication of fullbacks as a whole.

Getting up to speed is the task. The SEC is a beast, flat out. It sent 64 players to the NFL last season, which accounts for two full rounds of the draft. That’s a tough act to crack, and I will admit, I jumped the gun and kept running with last year’s assessment. But the Tigers are standing up, bloodied yet unbowed, and coming back for the sophomore season in the south. Hopefully, the tailgate isn’t the best part of the game this time around in Columbia.

2012: “This will be one of the most exciting teams in college football, simply because the Missouri Tigers will score—a lot.”

Okay, the Missouri Tigers MAY score, enough. During the baptism of last fall, they averaged 25.8 points a game, the fourth worst total in the SEC. Speed is a must in that conference, and the Tigers flat out were not fast enough to stay with the crowd a year ago. Henry Josey coming back changes that by himself. Josey was a week away from running into the Heisman picture two years ago, pulling up 1,168 yards via a Jamaal Charles-like 8 yards per tote, when a out of nowhere a knee injury stole away his 2013 season. If he can get back close to what he was again, he’ll be one of the best runners in the entire conference and a standout on a team that had none on offense a year ago.

2012: “Make no mistake about it however, the defenses this O will run into will be a lot faster than anything they’ve ran across before.”

If I didn’t get TSFJ understatement of the year for that, I don’t know what it is going to take. The spread finesse, draw and toss offense that was so phenomenal in the Big 12 got punched in the mouth with a million haymakers from the start last year, and it never got up. I mean, as you saw above, a guy got suplexed, Brock Lesnar style. They were outsized and outquicked on both lines, and that’s not likely to be something that changes this year. Getting the ball off quicker, and with less frills, is going to be a key to success … and saving quarterback James Franklin’s life. A life he nearly lost far too much during Mizzou’s baptism last fall.

This year’s concern goes as slightly less lovable, but no lesser in the danger portion of the program: Coach Gary Pinkel. His status as Teflon Don has been lifted, and it may very well be put up or roll out time this year. He’s had a lot of rope to hold after raising the program from shambles to its current level of relevance, but this is where the reality of SEC football sets in. There is only time for results, not adjustment. There is no such thing as a light schedule to get settled, just degrees of difficult, ranging from brutal to inhumane. Missing a bowl means missing dollars, letting down fans and generally not raising the prestige of the program. No matter where you’ve been, it’s about where you are going now. And if the team even stays neutral, it could be time for a new driver.

Prediction: It won’t be 2012 again, but it surely won’t be the Big 12 glory days either. There should be some improvement, because if there isn’t, there will be changes of the sweeping variety. The schedule isn’t easy, with Jadeveon Clowney, the Gators and (maybe) Johnny Football looming, but it’s devoid of Alabama and should be able to produce some bowl eligibility again. 7-5 looks reasonable, but if that’s enough to save Pinkel, who knows.