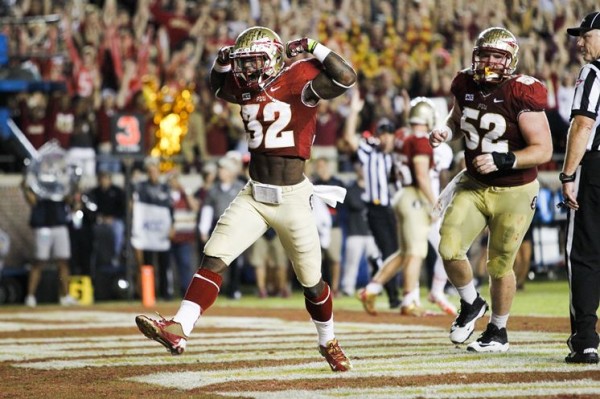 63-0. 51-14. 41-14. A top 25, a top 5 and a top 10 team faced Florida State this year. Those were, respectively, the scores of the game for each team, with FSU showing absolute dominance over the competition. Noticeably absent is the 49-17 shellacking FSU gave to NC State, with 35 of those 49 points coming in the first quarter. Every week I’ve waited for this Florida State team to show me flashes of previous years where the Seminoles lost games they shouldn’t have. Every week, they prove to me and everyone else this is not the team of past years. It’s been nine weeks, and I feel like it’s finally safe to say this: The Florida State Seminoles are legitimate title contenders for the BCS Championship game. But I honestly don’t care if they play in it ... this year.

I don’t care about Florida State playing in the BCS Championship game because in the grand scheme of things, it doesn’t matter. I won’t say “anybody” can win a BCS Championship game, but I’m more focused on the sustained excellence of Florida State than I am in playing in the game and then being thrown back into the “projects” of the sports world (like Auburn, post-Cam Newton). Sustained excellence will make BCS Championships a realistic goal (not unlike a certain school in the SEC) on a yearly basis, and as such, I’m far more excited about what will happen in future years than I am focused on the present.

Make no mistake though, I absolutely believe if Florida State goes undefeated, the 'Noles should be going to the big game. I’ve seen plenty of arguments about the softness of Florida State's schedule, the softness of the ACC, the strength of the other teams and some foolishly thinking FSU doesn’t belong. Let’s play the numbers game, shall we? The top three teams in the country have faced opponents with records of 29-40, 42-25 and 31-39. The first team is Oregon, the second team is Florida State and the third team is Alabama. Numbers may not always tell the truth, but if the strength of schedule argument is used, the Seminoles have just as much right as both Oregon and Alabama. Thing of it is, between the computers, the voters and public perception, nobody knows what’s going to happen if all three end up undefeated at the end of the season. I’ve decided that’s a worry I’m not going to concern myself with. After all, I have plenty to be happy about right now.

There's No I* In Team

Much has been made about the stellar play of Florida State’s redshirt quarterback superstar, Jameis Winston. Jameis Winston is better than advertised, but anybody who’s been watching the team knows that the people around him are just as important to his success. In all the years of watching FSU, this is the best team I’ve ever seen on the field. Period. There were years where FSU’s defense was stellar but the offense was stagnant. Years where the offense was prolific but the defense wasn’t very good. Years where the receivers were just decent but the rushing attack kept them in the game. And I can’t really remember the last time Florida State’s receivers were this good. With this 2013 team, we’re witnessing what can happen when everything clicks the right way. For the first time in I can’t remember how long, FSU is a complete team.

The Long Road Back To Relevance

Florida State is favored in every one its games by a pretty wide margin for the rest of the season. With Wake Forest, Syracuse, Idaho and Florida on the schedule, it’s a pretty safe assumption the 'Noles finish out the schedule at 12-0 and will be ready to face whomever makes it out of Coastal Division to defend their ACC title. The program had been mired in mediocrity since its last ACC title in 2005. Since Jimbo has taken over, he’s gone 38-10 as head coach with three consecutive bowl wins, capped with the Orange Bowl win last year. He’s now 8-0 this season and knocking on the door of a potential BCS Championship. To further illustrate how far Florida State has come, one only needs to look to the last time FSU was 8-0, let alone even in contention for a championship game. Fourteen years ago, in 1999. That’s a long damn time.

In conclusion, while it’d be nice to play in the BCS title game, I’m more concerned about Florida State’s sustained excellence. If someone measured up the numbers with respect to the strength of the competition the top three teams have faced, it’d be easy to see Florida State is just as deserving, if not more so, than Alabama and Oregon to get a spot in the game if they are undefeated. While Jameis Winston has been sensational, much respect should be given to the team he has around him. The most credit should definitely be handed to Jimbo Fisher, though. Jimbo inherited a team that hadn’t seen an ACC Championship since 2005, hadn’t been 8-0 since 1999, had been mired in mediocrity and turned the program around. For the Florida State-Miami game, there were roughly 40 or so recruits who watched from the stands. The recruits watched Florida State dominate an undefeated Miami team on national TV. Writing that last statement brought a wide smile to my face. Florida State (for real this time) is back.