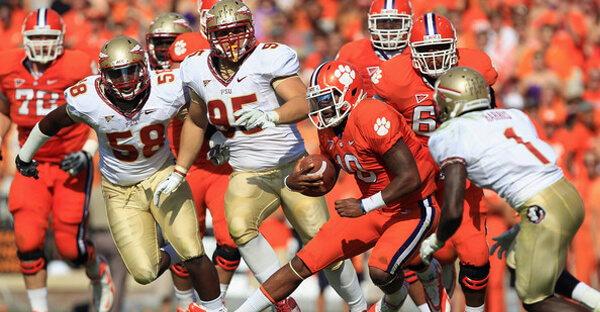 On Saturday, the Clemson Tigers will welcome my Florida State Seminoles to Death Valley in a battle that has huge implications for both the ACC and the BCS title picture. A game featuring two top-5 teams, two Heisman candidates, the two best quarterbacks in the ACC (with not much better in the country), a prime-time game on ABC was a no-brainer. Given the results of last year’s match-up in Tallahassee, the Tigers are no doubt ready for some payback. I expect a hard-fought game, with FSU having a great chance to come away with a victory.

That’s not (primarily) what this post is about though. Today, I just want to talk about how I felt when Clemson was given the keys to the ACC, what a joy it’s been to watch FSU this year, and how we — the Seminoles and FSU fans, are in the perfect position going into this weekend’s game.

All Hail The Class Of The ACC ... The Clemson Tigers?

Coming into the season, I was overwhelmed with the narrative of the “Clemson is going to win the ACC and compete for a national title” conversation. There’s a few reasons why I didn’t take it as disrespect. Even though the Seminoles were defending ACC champs who beat Clemson handily after the Tigers ran out of trick plays to run, admittedly, FSU was a bit of a mystery. The Seminoles lost five coaches, a three-year starting quarterback, 11 players on defense to the draft and many other contributors had graduated from the program.

Jimbo Fisher didn’t name a starter until a week before the Pittsburgh game, although many thought Jameis Winston won the job in the spring game. Reports coming from camp, however, told of a hard-fought competition between Winston and Jacob Coker, and Jimbo seemed to be legitimately torn on who to pick. Also, FSU had a new defensive scheme, five new coaches/coordinators, and a redshirt freshman QB. You know, problems you wouldn’t think a team coming off of its first ACC title and Orange Bowl win since 2005 would have to deal with. Picking Clemson seemed to make the most sense, since the only other realistic pick was going through so much turnover in such a short period of time.

Jameis Winston, The Guy Who Made My FSU Fanhood Less Stressful

Being able to watch Florida State this year has been the best sports experience of my life. Never mind the fact that our team is 5-0, ranked fifth in the country, has a prolific offense led by a redshirt freshman QB and a defense that seems to be finally putting it together. All of that stuff is awesome but irrelevant. For the first time in the last eight years, there’s finally a QB I can put my faith in.

When players talk about how calm Jameis Winston is, I believe them. He makes ME calm while I’m watching him at home. Despite their record, the Seminoles have actually trailed in quite a few games this season, but unlike last year, I haven’t worried once. Nope. Not with Jameis Winston aka Famous Jameis aka Jameis of Nazareth aka Chainus Jameis at the helm. To quote Lil Wayne, when other teams put [adversity] in his face, I ain’t got no worries. Winston has surpassed expectations I wouldn’t have even dared to dream, and he seems to be getting better every week. Scary. 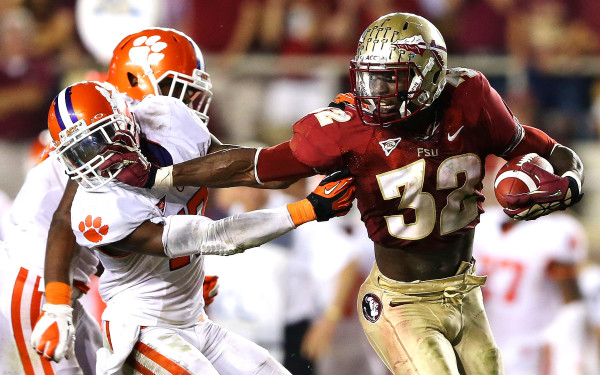 FSU Vs. Clemson And Why FSU Is In A Great Position

As I stated earlier, people have given Clemson the keys to the ACC, but I not only expect Florida State to compete in the game, I think FSU can win. The Seminoles are in the perfect position. If they lose, every excuse will be made affordable to us fans, and the 'Noles will simply be looked at as a young, scrappy team building a foundation to compete on a national level next year.

Clemson, on the other hand, is shouldering the pressure. They’re at home. Tajh Boyd is gone next year. Sammy Watkins is likely gone as well, and I wouldn’t be surprised if Chad Morris is head coach of Anywhere University next year. Everything for Clemson’s season is riding on this game. If the 'Noles lose, we lose. But if they win ... it’s a victory. A substantial one. Possibly the biggest victory they’ve had since they lost 13-2 to Oklahoma in the national title game (there you go, Ed). And I will revel in it.

All this talk of FSU being back would be legitimized whether they win by 1 or 100 points. I have been increasingly impressed with FSU’s play on the field, and to cap it off with one of the biggest wins I’ve seen (and been personally invested in as a fan) in my lifetime would be nothing short of awesome.

In conclusion, while I don’t appreciate FSU being overlooked for Clemson, I understand why. The Seminoles have had a tumultuous offseason that gave many a cause for concern. Being able to watch the team grow with Jameis Winston at the helm has been nothing short of amazing. Expectations for Clemson are high, and even though there’s an ACC/BCS title on the line, the 'Noles have nothing to lose since nobody expected them to win in the first place. If they do happen to win this Saturday though, it will surely be a cause for celebration and the final nail in the coffin to prove to everyone that FSU is, indeed, back.

4 Replies to “Florida State, Clemson And The Biggest Football Game In ACC History”