Now that the San Francisco 49ers have announced an extension for head coach Kyle Shanahan, the team’s focus must shift back to its best player, George Kittle. The 2017 fifth-round pick has far exceeded his rookie contract and doesn’t want to be limited by the market for tight end contracts according to NFL.com’s Michael Silver. His colleague Daniel Jeremiah has even speculated that a deal could average closer to $20 million than to $15 million, and it’s with good reason. As a follow up to his 2018 season that set the NFL record for yards by a tight end at 1,377, Kittle was named by Pro Football Focus as the best player in the entire league last year thanks to his dominant influence on both the passing and rushing offense en route to leading the team to a Super Bowl appearance. So what kind of deal would be reasonable for him?

Travis Kelce is the closest contemporary at the position, even holding the yardage record himself before Kittle broke it less than an hour later, but he signed his extension back in 2016 before the last year of his rookie deal. Per Overthecap.com, Kelce received $20 million guaranteed by adding five years and $46.3 million to his contract, an average of about $9.3 million per season. Austin Hooper topped that this offseason with a $10.5 million average and $23 million guaranteed in a four-year, $42 million free agent contract. Even though the franchise tag consists of the average of the top five salaries at the position, the highest tight end cap number will actually belong to Hunter Henry thanks to the $10.6 million value for this season’s tag. That can provide the baseline for what the floor is over the next few years.

Kittle is set to count as just $2,207,574 against the cap in the last year of his rookie contract, and $74,574 of that is from the signing bonus he received in 2017. Hypothetically, the 49ers could apply the franchise next year and then once more the following season with a 20% raise. Using this season’s $10.6 million as a placeholder for next year’s franchise tag, that would combine with this year’s $2,133,000 base salary for a total of about $25.5 million over his age 27-29 seasons. That is the bare minimum Kittle needs to receive between 2020 and 2022 in a potential extension. A guaranteed amount in that range would eclipse all other tight ends, but again, if he is to be properly compensated for his value on the field, he can’t be limited to the tight end lens.

Since Kittle is elite as both a receiver and blocker, the highest-paid players in those areas can create a ceiling for a deal. The wide receiver with the highest average salary is Julio Jones after adding three years, $66 million to the last two years of his contract, which provided $43 million in new guarantees last September. Just over a month before that, Michael Thomas added five years and $96.25 million to the last year of his rookie deal with $35.64 fully guaranteed. The largest total value was dished out this offseason when Amari Cooper signed a five-year, $100 million with $40 million fully guaranteed as a free agent.

This average salary of around $20 million for the top perimeter threats shows the importance of the passing game, and it is further emphasized by this year’s franchise tag value for wide receivers being $17,865,000, second only to quarterbacks. Kittle isn’t likely to come close to doubling the tight end market like this, but it is worth keeping in mind considering he has the sixth-most receiving yards in the league over the past two seasons.

On the blocking side, the franchise tag for offensive linemen is a little more modest at $14,781,000 this year since it covers all positions along the front. The top tackles approach the wide receiver range, though, and that’s even before Laremy Tunsil blew away the rest of the group this offseason with a three-year, $66 million extension that contains $40 million in guarantees. Lane Johnson has the next highest average salary after adding four years and $72 million in his extension, albeit with only $25 million fully guaranteed compared to Taylor Lewan’s five-year, $80 million extension that had $34 million fully guaranteed. In free agency, Trent Brown received $36.25 million guaranteed in his four-year, $66.5 million deal, Nate Solder was similarly guaranteed $34.8 million of his four-year, $62 million deal, and Anthony Castonzo is right up there in average salary after re-signing for $33 million over two years with $17 million guaranteed.

So for teams not run by an over-matched Bill O’Brien, the top linemen earn about $16.5 million per year with around $35 million in guarantees. That trails the high-end wide receivers ($20 million and $40 million guaranteed) but still vastly surpasses tight end contracts that are in the range of a $10 million average with $23 million guaranteed. That’s a large gap for Kittle to bridge, and NBC Sports’ Matt Maiocco thinks that the team could be reluctant to completely shatter the market. That was in response to a source suggesting a $14 million average salary with $30 million guaranteed, which would still trail the highest-paid non-quarterbacks by a fair amount.

Looking at those other positions, Kittle’s price on the open market is probably closer to a five-year, $75 million or four-year, $60 million deal with half of it guaranteed, but the team has the leverage with him still on his rookie contract.

Perhaps a compromise could be keeping his annual average closer to other tight ends but with the guaranteed amount in line with his true value, especially since Kittle has only received $1,963,296 thus far in his career. Something along the lines of a four-year $53 million extension with $37 million guaranteed would make sense since that would also allow him to potentially receive another strong contract after his age-31 season. A $13.25 million average in new money far surpasses any other tight end, and having basically the first three years guaranteed would put him among the wide receiver and offensive tackle group.

The 49ers could look at it as about $55 million over five years when combined with this season, which is more in line with the position and manageable for them. Sitting right in the middle of the pack with $15.6 million in cap space, a signing bonus can comfortably be absorbed now and spread over the full five years to lower the cap hit down the line. Many betting apps in the USA have San Francisco primed to repeat as NFC champions, and having their best player invested in the long-term future seems to be ideal. Therefore, they should reward him with a guaranteed amount that ensures that. 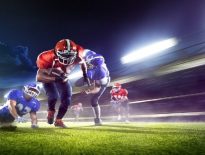