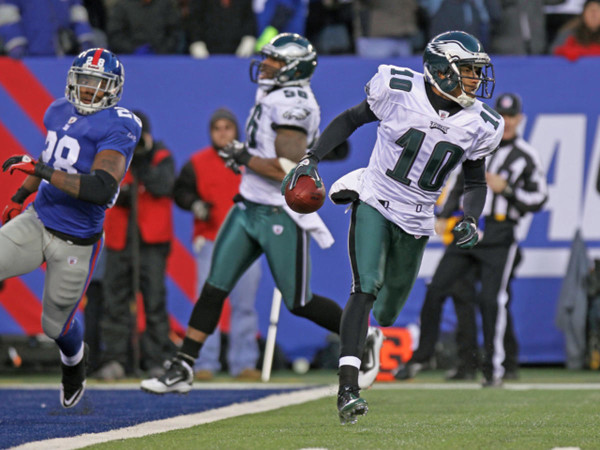 My girlfriend broke up with me the day before my graduation. It was also the day before our one-year anniversary. This isn’t about her — she’s married with a child, and I couldn’t be happier for her.

This is about what happened that weekend.

I felt awful through the process of graduation and the move home. That Sunday, my mother threw me a graduation party. Little did I know, it was a Christmas party.

My home filled with strangers, I slumped down in front of the television to watch the Eagles play the Giants. They were demolished most of the game. Only one friend and handful of random obnoxious northern New Jersey natives — and Giants fans — joined me in the living room.

Slowly, the Eagles came back. The room filled with the non-Giants fans, and suddenly the strangers were pulling for the comeback. DeSean Jackson capped it with a punt return as time expired. It raised the bar for phenomenal wins.

It also made my day. My graduation and subsequent week were scarred by unhappiness. I would get sick the next week, and that made things worse. But when Jackson sprinted through the middle of the field, the world froze and I was as high as I could ever be.

He held the ball in the air, and he slowly waited to get into the end zone. It was what DeSean did — stuff that made me bite my lip while still rooting for him due to production and ability to get under everyone’s skin. His talent was the concession worth making as a sports fan. I can’t say I respected the way he did his job or the way he seemed to act off the field, but he was my guy. He wore my colors.

The point of Jackson’s release that sticks with me isn’t the suspicions or the cloud of accusations. He’s not on the Eagles anymore, and I don’t know why any more than you do. We’re in the janitor’s closet while Chip Kelly and Howie Roseman run the team from the office. At some point, you’d love a definitive report as to why Jackson had to go, but don’t count on it.

As I thought about the crux of all this, it became another reminder of why I’ve suffered for so long as an Eagles fan. We have great players, great games and memorable moments. We haven’t won a championship since 1960. It’s clear no matter how good things are or once were, it’s never quite enough.

The fans hold onto those 4th and 26’s and the Miracles at the separate Meadowlands. They are things we recall when we bump into others in green, and YouTube wears out with our search histories that follow as such. Those moments are no different than DeSean Jackson — and it’s fitting he’s a part of so many of them.

They are glimmers of light in an otherwise lonely and dreadful existence. They provide us with exhilaration that every fan should experience, and when the disappointment sets in, we move on until the next player or moment.

DeSean Jackson was a shooting star who either burned out or did enough — and made enough — to make it hard for the franchise to see the brightness of his ways. He is no longer an Eagle, and that’s as easy to come to terms with as a person wishes to make it.

His punt return lives forever as a memory of the good times — the times when a team saved what should have been one of the best weeks of my life. As he holds up the ball, I still find the glory and everything that came with it — including the heartbreak it helped me forget.

You can’t replicate things like that with Mike Evans or Odell Beckham when their name gets called on draft day. Riley Cooper’s season won’t make anyone forget the miracle.

As an Eagles fan, you hold on to those fond memories, for there are too many more you remember that sucked. You never lose sight of them because they don’t come around very often.

The Philadelphia Eagles might search until the end of time for another receiver as productive as DeSean.

Their fans might look just as long for another moment as thrilling. Or maybe, those things are right around the corner, and they’ll add relief to any pain that still exists deep down.

He’s gone, and he’s not coming back. It’s not the first time. You can ask the New York Giants how it feels to see him slowly walk into never land.

Related: Merrill Reese Is A Better Rapper Than DeSean Jackson Without Even Rapping

2 Replies to “A Farewell To DeSean Jackson”