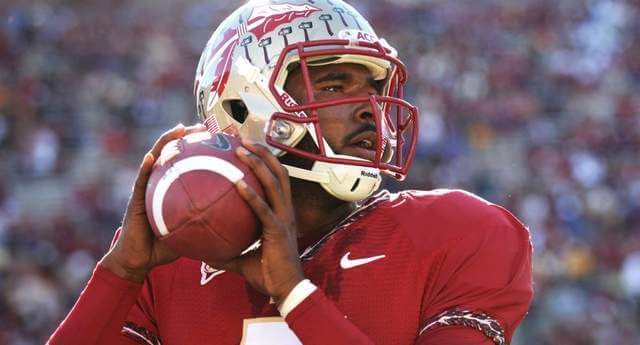 After Tuesday's Senior Bowl practice in Mobile, Alabama, Florida State quarterback E.J. Manuel had nothing but flattery to throw Chip Kelly's way. The Seminole gunslinger did everything but invite himself to stay at the Philadelphia Eagles training facility. Although many may think Manuel is just posturing for any market he's given an opportunity to play in, he has ties to Kelly.

According to Manuel, he almost took Kelly up on a scholarship offer out of high school.

Manuel spoke to reporters Tuesday, and here's a bit of what “I wanted to, man. [But] it was far,” Manuel, the record-setting quarterback from Florida State, said Wednesday. “I’m from Virginia, so that’s clear across the country and obviously [Florida State] coach [Jimbo] Fisher was the main person I wanted to play for. But I was really intrigued by coach Kelly. It was a great program, had great uniforms. That was something I liked as well. It was just too far.”
While this is all well and good, it can give us a little bit of insight into a high school senior's mind.

"It was a great program, had great uniforms."

The effect that Phil Knight and Nike have had on sports is undeniable. The impact of the crazy uniforms is obviously enough to still remain in Manuel's mind. Even if the mention of those jerseys is subtle and/or Freudian, it can remind us that 17-year-old kids like cool stuff.

Once a kid gets a license and a girlfriend and some neon yellow shoes, anything can happen.

Read the full story on Manuel hoping to reunite with Kelly to learn more. It's not creepy or anything I guess. It's not. LOOK, IT'S NOT CREEPY, ALRIGHT?!

2 Replies to “E.J. Manuel Speaks The Gospel Of Nike, The Oregon Ducks And 17-Year-Olds”