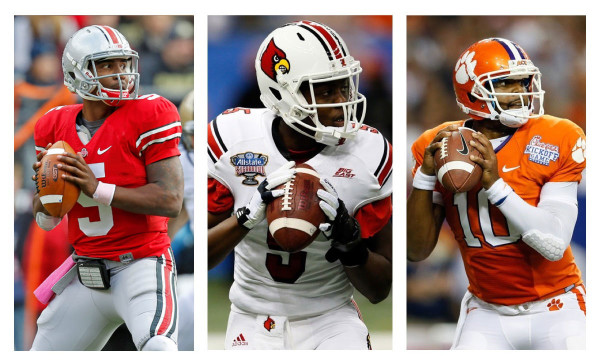 On this recent edition of The UC Show, Ed, Tinsley and Kenny discuss the opening weekend of college football. They speak about Clemson’s impressive outing against Georgia as well as the debut of Jameis Winston as he made his first collegiate start at quarterback on prime-time against the Pitt Panthers.

The three amigos keep the theme of college football alive by discussing The Three Bs: Braxton, Boyd and Bridgewater. After week one, they talk about who is the most impressive as well as what to expect as the season continues from three of the best quarterbacks in the country.

With the NFL season set to kickoff on Thursday night, it would only be right to talk about some of the best players in the League, especially the players at the wide receiver position. All three hosts talk about the difficulty in ranking players at the position and give a glimpse as to what is coming, in the form of a collaboration, on the site very soon.

Bryan Crawford calls in as well to discuss…well, you will just have to listen, but it is safe to say that he certainly did not anticipate having a “Come to Jesus moment,” but he certainly did on the show. It is a proclamation that the three amigos make all the time, but to hear it from Bryan Crawford is absolutely jaw-dropping.

by The Fam time to read: 1 min
Football Here Is The Most Unwearable Jersey For All 32 NFL …
Ed The Sports Fan Starting Lineups: The Famous Jameis Winston Era Ha…
0