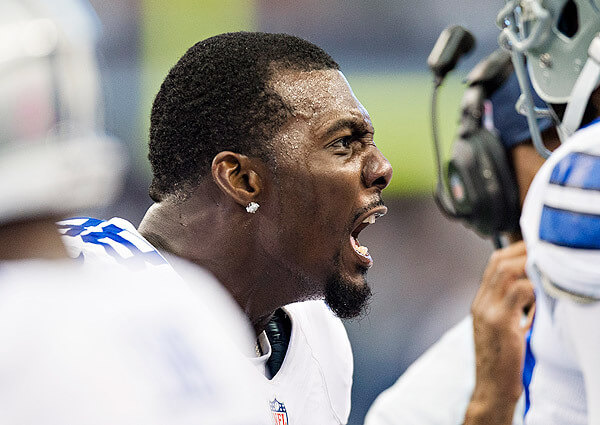 Terrell Owens. Randy Moss. Two of the greatest wide receivers to ever step foot on the gridiron. Over 15 seasons, T.O. compiled 1,078 receptions for 15,934 yards and 153 touchdowns. Randy Moss managed 982 receptions for 15,292 yards and 156 touchdowns over 14 seasons, and even added two passing touchdowns and a kick-return touchdown. Both have amassed team and league records. Along the way, there were spectacular catches and clutch catches and hilarious celebrations. And yet these two incredible athletes are known as much for their sideline/off-the-field antics as they are for their fantastic achievements on it.

Watch any Dallas Cowboys game this season and you will see another incredibly talented wide receiver who seems to be cut from the same cloth as Owens and Moss. That receiver is Dez Bryant. Watch the Cowboys play and the chances are you will see Dez Bryant rack up somewhere around 100 yards receiving and probably a touchdown or two (he has 61 receptions for 851 yards and eight touchdowns through 11 games this season). You will see him make a spectacular catch, or a clutch catch, or a spectacular clutch catch, and you will most likely marvel at his ability and wish he was on your team.

But you will also see him look around with arms spread and palms up after every pass his way that goes incomplete. You may hear references to a checkered past, the details of which I won’t repeat here. And you may see a sideline implosion, with Dez ranting and raving and seemingly screaming at his teammates (NFL Films audio released the day after an incident this year seemed to indicate that the rant had a much more positive message than the video conveyed). Regardless of the message, the video can’t help but bring back memories of T.O. pacing the sidelines screaming at everyone in sight or of Randy Moss walking off the field in frustration before the final seconds had ticked off the clock.

Petulant. Selfish. Arrogant. These are adjectives that you will hear people sometimes throw around in the case of star athletes, and especially in the case of star wide receivers. But using these words and picking out a specific incident to justify their use is insufficient. As we have seen in the case of Dez’s sideline rant earlier this season, the video doesn’t always tell the whole story, and we don’t always have the full context of what is really going on.

Are there times where these types of players act petulantly, or selfishly, or arrogantly? More than likely, yes. But it is these same qualities that help make them great, that take them to that next level, that make them stand out.

To get to where these men get, you have to be somewhat arrogant. You have to be incredibly confident. You have to have a ton of passion. And when we see this combination spill out in a fit of frustration, it looks petulant and selfish and arrogant. When we see T.O. or Dez screaming on the sidelines or hear Keyshawn Johnson scream, “Give me the damn ball,” it’s not coming from a place of selfishness, of me, me, me, of I want to pad my stats. It’s coming from a place of wanting to win, wanting to be a part of helping the team win, and truly believing that getting them the ball is the best way to make that happen.

A parallel from another sport is my favorite athlete of all time, Allen Iverson. Yes, Allen Iverson took a lot of shots. But Allen Iverson took a lot of shots because he honestly believed that him taking a lot of shots gave his team the best chance to win and, most of the time, he was absolutely right. Allen Iverson was far from perfect. He will be the first one to admit that, and there were times when the incredible pride and confidence he had that allowed him to become the greatest little man to ever play the game, or the “best pound for pound player of all time” as Lebron James would put it, sometimes manifested itself in negative ways — such as a less-than-ideal approach to practice or neglecting to take care of his body the way he should. But I wish that every athlete who ever stepped on a field or a court would compete with the intensity on a night-to-night basis that Iverson did, and I wouldn’t trade the privilege of watching him play for my favorite team for 10 years for anything.

I also had the opportunity to watch T.O. play for my favorite team for a short while, and for all the drama and the headaches, it was worth it. Because I knew every Sunday he would be out on the field doing his best to help win the game and, in doing so, make incredible plays and provide countless memories.

Although this personality paradox can manifest itself in any athlete in any sport, it is particularly prevalent among wide receivers. DeSean Jackson, though not on the level of the other guys mentioned here, is an incredibly talented, play-making wide receiver who has been known to make a scene or have his attitude questioned by some. Even the seemingly mild-mannered Andre Johnson recently had a sideline spat with his quarterback and an early exit from the field, though it got much less scrutiny in the media than Randy Moss’ did. So even the most well-behaved of star wide receivers can occasionally fall victim to it.

The very personality traits that allow them to excel and reach the heights of their profession and provide those spectacular moments and memories for the fans are the same traits that can lead to some sideline or off-the-field drama. You have to take the good with the bad, because without the bad the good wouldn't be there to enjoy.

2 Replies to “Dez Bryant And The Wide Receiver Personality Paradox”