The news that Maryland and Rutgers would join the Big Ten Conference has been met with a great deal of head scratching and outright criticism. But the move makes sense for the Big Ten on several levels.

Many have predicted that we are headed to a future with four superconferences of 16 teams each. If we accept this as inevitable, then is it best to act now and make a play for the best available schools or wait until the pickings are slimmer? That’s an easy call. To quote Charlie Wilson from the Gap Band, “The early bird always catches the worm.” If the Big Ten doesn’t try to scoop Maryland, the SEC certainly would. It’s a defensive move more than anything else.

Geography is not going to be as big a problem as many have predicted. Once the Big Ten gets to 16 teams, look for the conference to split into four divisions of four teams each, like the NFL conferences. Maryland, Rutgers, Penn St. (and perhaps Boston College or Virginia) would form a superb Eastern division. Oh, I forgot. The Big Ten uses crazy names for its divisions. Well, whatever they are called, there would be some great rivalries. The divisions would allow non-revenue sports to stay within their geographical areas and cut down on costs. I don’t see the Rutgers girls field hockey team trekking out to Nebraska anytime soon.

The elephant in the room when dealing with Big Ten expansion is always Notre Dame. This move has the benefit of taking a veiled shot at the Golden Dome. Notre Dame dropped its contract with Michigan State and kinda/sorta joined the ACC. Now the Big Ten has weakened the ACC by grabbing Maryland and might get someone else. The goal is to leave Notre Dame with a dilemma: hang with the ACC, which is trending down, or finally agree to join the conference that you seemed a perfect fit for all along. 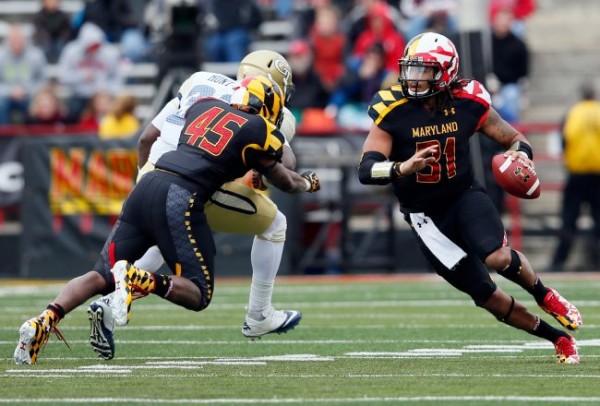 Of course, TV contracts are why all this is happening in the first place. Yes, the New York/ New Jersey and DC markets are quite appealing. But it’s more than just the market size, which is considerable. The counties surrounding the DC and NY areas are some of the most affluent in the country. Ad revenues increase when wealthy people who can afford to buy the cars, watches and designer clothes that are being advertised tune in. No offense to West Virginia and Cincinnati, two schools often mentioned as better fits, but they just don’t play in the same ballpark when it comes to potential revenue.

Establishing a beachhead in the nation’s capital would be a big coup for the conference. Prestigious federal science and research grants are awarded from Washington. It can’t hurt to have a school in the area to help lobby for those cherished funds. The same holds true for inviting Rutgers. New York is the financial capital of the country if not the world. A presence there can only strengthen the conference’s appeal in business and economics.

No one is doing cartwheels over this news. Maryland is a founding member of the ACC, and the fans don’t want to leave. Big Ten fans see no great appeal in inviting these two schools. However, change is the only certainty in this world so we might as well roll with it and make it work out for the best.