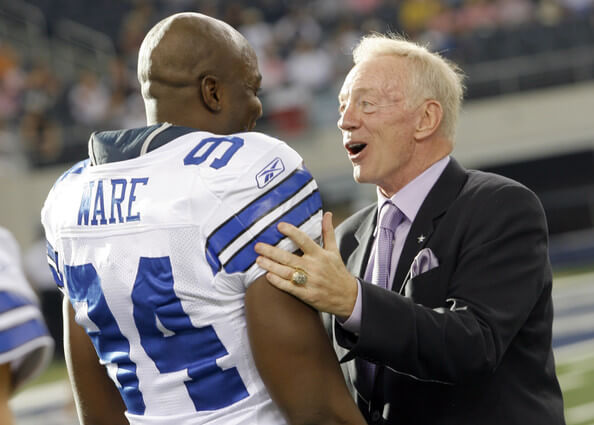 It has been 16 long years since the Dallas Cowboys last won a Super Bowl. There have been five head coaching changes, good players have come and gone and coordinators have left to become excellent fits in other places. The defense has been overhauled multiple times going from 3 – 4, to 4 – 3 and back to 3 - 4. The coaching changes have really affected the talent pool. Some players have been run away from the program, while others should have never even donned the star on their helmet in the first place.

Through all the rigors that the Cowboys have faced, there has only been one constant, and there lies the problem. The constant is Jerry Jones. Let’s face it; Jerry came out of the blocks as an owner better than anyone I can remember. Let’s also not forget that he was helped out of those blocks by the great coach Jimmy Johnson, who helped Jones assemble the youngest, fastest, most aggressive and inexpensive team to ever lace up and compete on the big stage.

At this point, I think it’s safe to say that things have changed in Big D. Jones has gone from growing talent to buying talent. It all started with the signing of Deion Sanders and the Cowboys got instant gratification by winning a Super Bowl. Now every time Jerry goes on a spending spree to bring in that ONE irreplaceable piece, it just magnifies the incompetence of the owner.

Quite honestly, the franchise has been in turmoil since 1997. The Cowboys have no identity and, quite frankly, have a team full of overpaid, under-performing players. That’s part of the problem. The players are too comfortable and don’t perform at a high level. When guys were playing for those contracts, you seemed to get a whole lot more out of them than you do now.

The problem is that no one fears the Cowboys any more. Everyone keeps talking about all the talent that the General Manager/Owner Jerry Jones has put together when, in fact, this team is not what everyone thinks they are. Yeah, they may show signs of invincibility, but they make more mistakes than any good football team I have ever witnessed on a weekly basis.

Earlier last week, Jerry Jones admitted that he was scared of the Eagles. That is a far twist from the “paper champions” cry that we got from Jerry and his staff earlier in the season. Maybe Jone's fear wasn’t with the Eagles, but instead with his current coaching staff and head coach, Jason Garrett. Maybe JJ wishes, deep-down inside, that he would have kept Sean Payton around instead of giving Bill Parcells another year or even hiring Wade Phillips. Maybe JJ's followers have finally lost faith in Tony Romo as the future of the franchise.

Whatever it is, it’s not he's not being his normally over-confident self, and that says much more than even Jerry is probably prepared to admit. Jones is clearly uncomfortable with the state of the Dallas Cowboys. The Cowboys are a shell of their former selves and, quite frankly, they don’t pose fear on anyone anymore. I remember a time when no one wanted to come to Texas Stadium and play, because they knew they would be in a dog fight. Now teams are begging to come to Jerry’s World, so they can do what everyone else has been doing to the Cowboys since the place opened up.

Maybe this is JJ's warning to the team that they need to find another gear. Maybe he just wants to see more fight in his team, or maybe he has finally accepted the fact that his team isn’t really worth a damn and that he's fed up with mediocrity.

Well, if that is the case Jerry, let me help you out. First thing you have to do is fire your General Manager. That’s right, Jerry; GTFOH. Seriously, you are one of the best owners in the league. I will even go as far as saying that you are one of the best owners in professional sports, period. But you are nowhere near being one of the best general managers in the league, not by any stretch of the imagination. You have no idea what a franchise should be made of. When you have a team full of overpaid players, you get nothing on your return. A man works hardest when he has everything to lose. That will explain how you got so much out of guys like Larry Brown and Ken Norton Jr.

If you make this happen, you have some good cornerstones to build around. Tony Romo is a franchise quarterback; he just needs a little polishing and a real coach. He flourished when he had a game breaker at wide receiver and the play-calling was a nice mix of run and pass. Give a new general manager a chance to build around Romo.

Defensively, give a new GM the chance to build around Demarcus Ware. Revamp that secondary with some young and hungry talent. I am speaking from my heart like a true Cowboys fan should, and I just want you to get the most out of this team. The opportunity is there, if you seize it.