Last year, as the Dallas Cowboys and Philadelphia Eagles were stumbling over themselves in committing football follies left and right, Cowboys fan Justin Tinsley and Eagles fan Reverend Paul Revere squared off in an email chain of the ages on our teams’ incompetence.

This year, things are vastly different. In the 2013 NFL regular-season finale, the Eagles will take on the Cowboys in “Jerry’s World” on Sunday Night Football to decide who wears the NFC East crown and secures a spot in the playoffs. Winner takes all, loser thanks the lord his team isn’t owned by Dan Snyder. With the stakes raised this year, Tinsley and the Rev decided to do something a little different in keeping with the holiday spirit.

5 ‘Nice Things’ About The Dallas Cowboys by The Rev

1. Sean Lee went to my alma mater, Penn State, and is really, really good. Though, you know, god is punishing him for becoming a Cowboy by routinely keeping him off the field due to injury, which will be the case Sunday. I can’t say it’s undeserved punishment.

2. Dez Bryant is never late. If anything, the man likes to get a head start on departing by jetting a little early to beat the traffic.

3. Jon Kitna is a creative fellow, especially when it comes to his Halloween costume.

4. The holy Dallas triumvirate of Tony Romo, Jason Garrett and Jerry Jones is the best show in the NFL. I mean that in all honesty. Nothing is more entertaining than watching Jason Garrett (and offensive coordinator Bill Callahan) ignore his stud running back, call pass play after pass play, and then watching it eventually all implode on one Tony Romo mistake, leading to everyone laughing at Romo — the very good quarterback who just can’t catch a break. AND THEN, as the kicker, we get Jerry Jones defending his star quarterback and giving his annual “vote of confidence” to Garrett as he mettles with the red-headed one’s business. It’s amazing.

5. Darren Woodson provided the best quote about Eagles fans of all time:

“You always hear about how Eagles fans are the nastiest in the NFL,” Cowboys defensive back Darren Woodson said. “But I’ll tell you what, I wish our fans here in Dallas were as nasty and as feisty as they are.”

5 ‘Nice Things” About The Philadelphia Eagles by J. Tinsley

1. Personally, I can’t wait to see the statue of Nick Foles erected next spring alongside the Rocky statue. In less than 12 games, he’s cemented his title as the greatest quarterback in franchise history and had his name mentioned alongside Peyton Manning. When your standards are low, the accomplishments feel that much greater. But that’s not necessarily a bad thing. It’s the reason American loves Quagmire.

2. The fact that the Eagles’ trophy case remains so spotless is a testament to hard work and dedication. I mean, not one particle of dust ever seeps in that trophy case. NOT ONE. It’s brilliant. It’s like the Area 51 of trophy cases, only Area 51 houses one or two worthwhile pieces of shit. But never mind that pointless jab. Salute to the organization for its  unwavering commitment to cleanliness. What spray do you all use? Clorox All Purpose Cleaner With Bleach? The world is dying to know the method to your madness.

3. Credit Dez Bryant for his punctuality, but I’d like to credit Riley Cooper for his humanitarianism in bringing the fans of the Philadelphia Eagles together. Nothing soothes over bigotry like an Earth-shattering eight touchdowns.

4. This past week, a truly good friend of mine who shall remain nameless and is a huge Eagles fan (not Rev), sent me the following text message while I had yet to come to grips with the loss of my dear quarterback, Tony Romo. Allow me to add a brief bit of commentary as we go along.

Reaction: OK, fair enough. I’ve heard that once or twice.

“At this rate, we’re going to catch you all in Super Bowls before you win another one.”

Reaction: Again, my nameless friend is a great person. I don’t want anyone thinking otherwise. I value [his/her] friendship, but stop me when I’m wrong. To actually establish a rate … forget it.

5. You know what? From their bully pulpit, Eagles fans are 150% correct. Dallas stands absolutely no chance, especially with Kyle Orton and that glorious mullet of his starting at quarterback. Hand Philly the NFC East crown now. What’s the point in playing the game anyway? Because there’s no way Nick Manning Brady Foles and this team — the greatest collection of professional talent the city of Philadelphia has seen since the 2008 Phillies or, my personal favorite, the 2001 Allen Iverson-led Sixers — will lose a game to a semi-starter, more-than-frequent career backup quarterback on the road. Because there’s no way it just happened two weeks ago to Matt Cassel. To Matt Cassel, who threw for 382 yards, and an Adrian Peterson-less and Toby Gerhart-less offense that the Philadelphia defense allowed Matt Asiata — MATT MOTHERF’N ASIATA — to scamper for three touchdowns and the Vikes as a team damn-near drop half-a-century on them.

No way. Not this Eagles squad. Never. 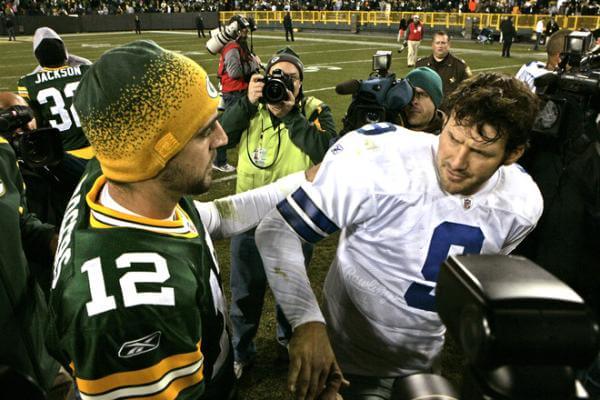 Basketball The NBA On Christmas Day Open Thread: We Got 14 Ho…
11