The familiar sounds of Mustard & Migos “Pure Water” filtered through the stadium speakers minutes before Utah kicked off against Washington State several Saturdays ago. As both teams finished warm-ups, the Utes Cheer squad huddled together on the sideline awaiting their cue.

“This is my jam!” one enthusiastic cheerleader exclaimed to his teammates while executing a series of movements that would have made Usher weep. As the bass echoed off the turf, reverberating through the stands, it was clear that Utah fans were in the building and feeling not only themselves but the energy dripping off of DJ Bangarang’s deck.

That kind of BDE – Big Drip Energy – is always the goal for Bangarang, the Utah Utes resident pre-game DJ. He can see it in the stands when fans are moving in time with the beat. He can see it on the sidelines when recruits are Snapchatting along with Lil Nas X’s “Panini.” But most importantly he can see it on the field, where his music manifests into hype, a veritable fever-pitch of emotion so tangible you can taste it.

Yes, Bangarang has his finger on Salt Lake City’s pulse – he is a mixer and on-air host for U92, he DJ’s several clubs and parties in SLC and he is the stadium DJ for Real Salt Lake, Utah’s Major League Soccer franchise, where club supporters nod on to his beats and check the latest soccer betting odds before kick-off. Watch what a typical weekend looks like for him in Episode 3 of his Bangarang Show. 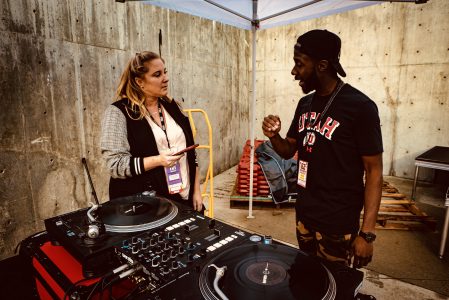 So then the question had to be asked, what is the biggest difference between djing a football game and a soccer match?

As for football of the college variety, there has been a significant shift away from classic rock and Sandstorm remixes – now rap and hip-hop reign supreme.

“I feel like Hip Hop just in general now is so mainstream and not that it wasn’t acceptable before but it’s more widely accepted now,” Bangarang said.

Bangarang brought the energy that Saturday, and in the No. 9 ranked Utes' 38-13 victory over the Cougars, it was as if the drip literally fell from the sky.

Utah football went on to dominate Oregon State 52-7 on the road, hold their Southern foe Arizona State to just a field goal in a 21-3 win at home and completely shut out the California Golden Bears 35-0 last weekend.

Utah’s game-day atmosphere is to be feared. And if you have never been to 'Sack Lake City,' consider yourself warned.

“I feel like people would be surprised to hear that we actually have a music scene – but in Utah, we turn the F up out here,” explained Bangarang. “Our hip-hop scene is definitely slept on.” 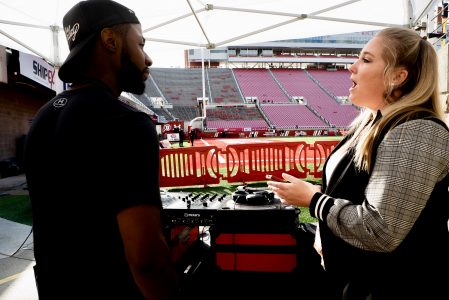 It’s true, a lot of people sleep on SLC – the music, the vibe, even the football. Utah is one of the quietest 7-1 teams in the country, boasting one of the top quarterbacks in the game with Tyler Huntley. The senior signal-caller ranks fifth in the nation in completion percentage (.731), sixth in pass efficiency (181.0), and fourth in yards per pass attempt with 10.65. All three of those marks are also top in the Pac-12.

The Utes are one of just six teams in the FBS that have allowed one interception or less (one of two in the Pac-12). Utah is tied for second in FBS in first downs defense (101) and the Utes lead the nation in rushing defense (56.4), with opponents averaging just 2.5 yards per carry.

DJ Bangarang has yet to meet or work with head coach Kyle Whittingham, but as his role with the program grows, that meeting of minds is likely on the horizon. Nobody could talk Whitt away from his favorite artist, the Rolling Stones, and into some Travis Scott better than Bangarang.

“I think that because this is still such a new concept – the idea of an actual in-game DJ, that the athletic department is waiting to see how the pre-game goes,” said Bangarang. “But I wouldn’t doubt in a year or so that we will be doing it, given how much the crowd and the players vibe with it.”

The RES should have a say, after all the Utes have sold out 62-straight games in Rice-Eccles Stadium since the 2010 season opener, including 58 standing room only crowds. The school record for season attendance average is 46,533 (set in 2015) and Utah has averaged more than 46,000 fans per game in four of the past five seasons. Plus Utah is one of just five college football programs whose 2018 attendance represented 100 percent or higher than the capacity of its stadium, claiming the fourth-highest capacity percentage of 101.1%. Nebraska (104.2%), Oklahoma (103.9%) and Michigan (102.9%) were the only schools ahead of Utah, while Georgia (100%) rounded out the top five. All four of Utah’s home games this year have been standing room only.

“Playing to a club is one thing but playing to a packed stadium full of screaming college football fans is next level,” exclaimed Bangarang.

And good teams are getting harder to ignore. True, this hasn’t been a masterpiece season for the Utes yet, but any lingering doubt from the early USC loss could be chased away by a big win over Washington this weekend. Bangarang’s beats will be there in spirit as the Utes continue to bring the Big Drip Energy and encourage you not to #SleepOnSLC.