2016 has been a hell of year, both in the sports world and beyond. From heated presidential debates to noted celebrity deaths, many have tired of this year’s nonsense. We as a culture have never been so ready to usher in the next 12 months.

In the college football world, however, the more things changed this year, the more they ultimately stayed the same.

A quick look back at the Week 2 rankings shows just how true that adage rings. Alabama and Clemson finished No. 1 and No. 2, bringing the 2016 season full circle. Louisville also maintained order with a 13th-place finish. But what happened to the other 22 teams? Here’s a look at where they are now.

5 Teams That Moved On Up

Why: The Buckeyes moved up thanks in large part to their 30-27 double-OT victory over Michigan, a game that was named the top college football game of 2016, courtesy of Sports Illustrated. Washington solidified its climb with a one-loss season punctuated by a dominating 41-10 victory over No. 11 Colorado in the Pac-12 Championship Game. Wisconsin’s 10-3 record against six opponents who were ranked in the top 10 when the Badgers faced them coupled with outstanding play from senior tailback Corey Clement aided in Wisky’s No. 8 ranking.

All other teams aside, the state of Oklahoma is definitely where the real is on the rise. The Sooners' dynamic, potent offense — a passing combination of Baker Mayfield and Dede Westbrook as well the rushing attack of Joe Mixon and Samaje Perine — aided Oklahoma in its climb. The offensive effort paid off, as Oklahoma finished third in the nation in scoring offense, averaging 44.7 points per game. As for the Cowboys,  their 9-3 season was solid if not overly impressive, but Oklahoma State won the games it needed to win, giving them a second-place finish in the Big-12 and the opportunity to play Colorado in the Valero Alamo Bowl. OSU's biggest secret to success: the 10 transfer players on the game day depth chart who combined for 47 starts, 1,098 all-purpose yards, 10 touchdowns, 235 tackles (31.5 for a loss), 12 sacks and five interceptions.

5 Teams That Dropped Down

Why: The Stanford Cardinal’s decline started with the 44-6 loss to Washington and ended with head coach David Shaw’s normally prolific offense scoring only three points against Colorado. Conversely, Michigan’s fall was minuscule, mere inches on a drive-extending first down. The Wolverines' double-overtime loss to Ohio State dashed their playoff dreams, dropping them out of the top four for good. For Tennessee, playing in the SEC proved too much — losses to the usual suspects are understandable, but a last-game 45-34 loss to Vanderbilt does not a top 25 team make. 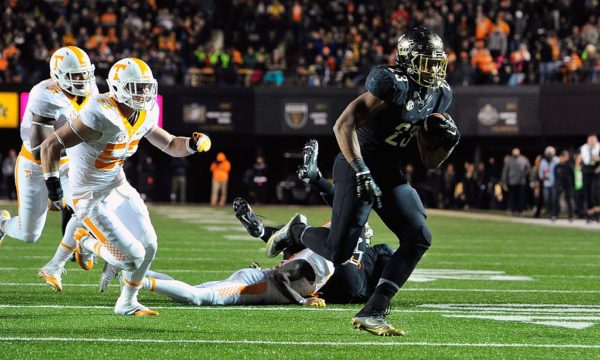 LSU’s year was a struggle from start to finish with firings and injuries and even the death of a beloved mascot. Despite only four losses, the Tigers couldn't stay ranking-relevant. What didn’t help was the lackluster special teams performances. LSU’s kickoff return ranked 116th in the nation while the punt return game ranked 78th. Fortunately, head coach Ed Orgeron dismissed special-teams coordinator Bradley Dale Peveto on the first day his interim title was removed. Florida State finished the season on a high note: Head coach Jimbo Fisher didn’t leave for the LSU job, and the Seminoles defeated Florida 31-13 in the last game of the season. But home losses to Clemson and North Carolina and a loss on the road to Louisville saw the Noles slip in the rankings.

12 Teams That Fell Off

Why: The Houston Cougars were once a favorite to contend for a College Football Playoff spot, but a midseason loss to Navy followed by losses at SMU and Memphis dashed the Cougars' dreams of being undefeated. And we are all familiar with the complete program meltdowns and subsequent head coach firings at both Oregon and Texas, two programs that will one day live again under new direction. We also understand the mess at Baylor.

But what happened to 3-9 Michigan State and 4-8 Notre Dame?

Head coach Mark Dantonio attributes the struggle to turnover margin, lack of senior leadership and poor red zone play. Quarterback will be a key position for the Spartans next year.

Notre Dame’s 4-8 season was painful to watch, and special teams played a big factor in the Irish’s lack of success. Notre Dame ranked 123rd nationally in yards per punt return and 95th in yards per kick return. Head coach Brian Kelly believes a shakeup in staff will aide in turning things around next year; he parted ways with tight ends coach/special teams coordinator Scott Booker, who became only the second assistant Kelly has let go in his seven seasons in South Bend.

Meanwhile, the Georgia Bulldogs were just a another victim of the SEC, suffering too many losses to their own kind. Another product of conference bullying: TCU. Losses to Oklahoma, West Virginia, Texas Tech, Oklahoma State and Kansas State saw the Horned Frogs fall to a mediocre 6-6 season.

Iowa’s 8-4 finish wasn't bad, but the Hawkeyes' defense was uncharacteristically inconsistent for stretches this season. During a loss against Penn State, Iowa allowed 599 yards of offense, the most allowed by the Hawkeyes since 1999. Ole Miss took a loss when senior QB Chad Kelly went down with a season-ending knee injury in November, but the Rebels struggled well before that, suffering conference losses to Alabama, Arkansas, LSU and Auburn. There is light at tend of the 5-7 tunnel in the form of freshman QB Shea Patterson, who stepped up when Kelly went down.

Texas A&M started the season strong with a six-game win streak before meeting Alabama, and the Aggies seemed to recover nicely with a win over New Mexico State. But they turned around and lost back-to-back games to Mississippi State and Ole Miss before finally falling to LSU at the end of the season.

Lastly, 8-4 Miami: Mark Richt had a solid first year at the helm for the Canes, but four losses in a row midseason, particularly the one to a struggling Notre Dame squad, began to raise some questions. But Richt shored things up, finishing on a four-game win streak. He will look to capitalize off the team’s momentum heading into the Russell Athletic Bowl against West Virginia. It would be the Canes' first bowl game win since 2006.