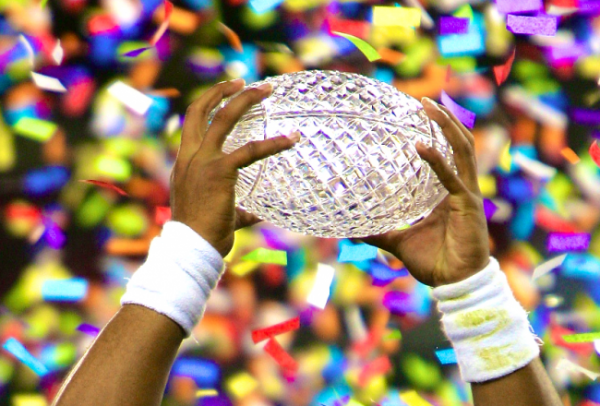 The celebrating has begun. College football appears certain to institute a four-team playoff and add a Championship Game starting in 2014. The fans are making a joyful noise. The university presidents and AD’s are delighted. ESPN is delirious. Jerry Jones, who everyone expects to win the bidding for the first Championship Game, is doing backflips.

Just one thing, did college football fans forget about the players?

Another game was just added for them to prepare for and play in with no additional compensation on their behalf. Yes, I understand that only two teams will have an extra game, but every business major out there knows that businesses must continue to grow to be successful. Twenty-five years ago, teams played 11 regular season games plus a possible bowl game. Now it’s 12 plus a possible conference championship plus a bowl game plus a new national championship game. That’s 15 games – a 25 percent increase. No one is doubting that this will lead to an eight- or 16-team tournament, which runs the tally to 17. An NFL schedule for college kids.

I’m certain that some folks are looking for other ways to add product to such a successful franchise. These spring games are getting more and more popular. Ohio State recently drew 92,000 Buckidiots to watch a glorified intra-squad scrimmage. (OK, I admit, I was on the 30 yard line.) What if there was a Spring Big 12 vs SEC challenge where teams met for televised exhibition games? (Whoa. Maybe I should copyright that idea right now!) Too far-fetched? If someone does research and realizes that it will make money on these new college cable networks, anything’s possible.

Here’s what I don’t understand. NFL commish Roger Goodell was vilified for suggesting that the NFL add two games and have an 18-game schedule. He doesn’t care about the players’ safety. There’s already too many injuries. The concussions are debilitating and even life-threatening. But the same sports talking heads who clowned RG are dancing in the streets and calling for the college players to play more games. I guess no one’s worried about injuries as long as we’re adding playoff games.

It seems like if you make a deal with someone, you shouldn’t be able to require more of them without some kind of reimbursement. When I was in school, part of my scholarship package included working 15 hours per week in a research lab. I would not have been happy if they just arbitrarily changed it to 18 or 20 hours because it benefitted them with no regard to me.

Let’s say you work for a widget company. The CEO gets on the loudspeaker to announce that the company just got a new multimillion-dollar contract. Everyone will get raises, the administrators, the executives, the salesmen, the secretaries, the janitors, the IT guys. Oh, I’m sorry. I meant that everyone will get raises except the laborers on the floor who actually make the widgets that people are coming to buy. Too bad for you. And we need you to put in more hours. But we all appreciate your hard work. Thanks.

Now some will argue that lower division colleges are already playing this kind of schedule. Well, I mean no offense, but the higher you go in football, the harder and more intense the hits. Would you rather be hit by a 210 pound linebacker who runs a 4.9 or a 250 pound linebacker who runs a 4.4? Joe Schmo from Missouri Western or Pepper Johnson? It’s just not the same game at those levels.

How do we compensate the players for extra games? That’s a tough one. I understand that there are title IX issues. You can’t pay some athletes and not pay others. Perhaps money can be put into a fund for hardship cases or for players to complete their degrees if their eligibility runs out before graduating. I would like to see some sort of recognition since we’re asking the players to put in more work. It just seems un-American to require more manpower out of someone for the same tuition, books and laundry money. All I’m saying is that before you go crazy celebrating all these extra games, take some time to think about how it affects the labor force.

5 Replies to “College Football Fans: Talkin’ Out The Side Of Your Neck”

College Football Fans: Talkin’ Out The Side Of Your Neck

Bull City Gunslingers Can Only Carry You So Far: Franchises …

Football The Nightmare Of Fantasy Football: Three Types Of …
5