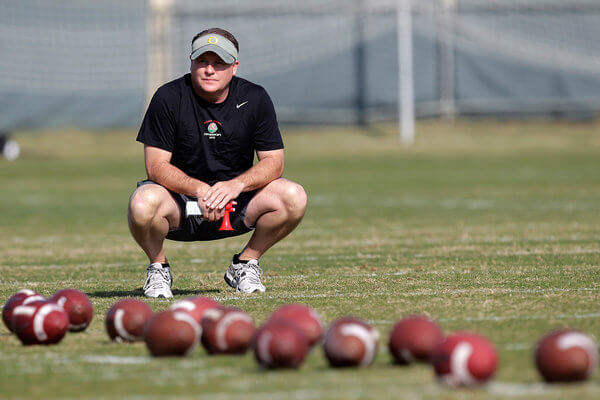 When Andy Reid lost his job, it was clear things would be different for the Philadelphia Eagles. After 14 years of the same mind-boggling timeout decisions, change was afoot.

At some point last season, amid the losing and joking, the die hard in me came to a conclusion. It was a final decision that the same old thing had grown tiresome. Yes, there was success and consistency. But, there was also a stale odor that drove me to speak words I hope my mother never hears me utter.

Eagles fans could set their clocks to Reid. Each different combination of circumstance had been done before. It was easy to recall what would happen next. So, as the season wore on it became even clearer that something different was better than whatever came next from Reid. It was time to go because time had overlapped itself.

Suddenly, we were in the grips of something different. A head coaching search hadn’t happened since, “I’m Your Angel” by R. Kelly and Celine Dion topped the charts. Around and around we went, with choppers following Gus Bradley around and Penn State alumni debating the pros and cons of Bill O’Brien.

Finally, the Eagles had a coach. Fittingly, he was a different kind of coach.

There's something about Chip Kelly. He’s either a snake oil salesman (a successful one at that), or he’s the man who's ahead of the curve. In fact, he may be so far ahead of the curve that he’s able to change the game.

This isn’t just the zone-read option we’re talking about. It’s not only the no-huddle offense. Sure, it’s a bit of both things. But, it’s also about schemes and substitution groups and more. He’s incredibly different in every way imaginable.

Everything seems hushed. No one knows if the team will run a 3-4 or 4-3. We guess at each trade and free agent signing what is in store – but we’re in the dark. Will the offense be strictly what we saw at Oregon? It doesn’t seem like that would work.

It’s a combination of the unknown and a fan base desperate for success. That's enough to start the stir. Throw in Kelly and his charisma, quick rise and innovative techniques, and you have something unlike anything I’ve seen before.

Kelly could end up being a huge success or a colossal failure, and it seems like those are the only two options. It feels boom or bust, feast or famine. If the former occurs, he’ll have a page in Philadelphia sports lore. If not, he’ll end up another Buddy Ryan or Ray Rhodes or – gasp – Rich Kotite.

The Eagles moved their training camp out of Lehigh University and into the team’s training complex in Philadelphia. Kelly blares loud rap music at all the practices. Lockers have been shuffled to maximize camaraderie. The team runs and runs some more. They are supposed to get 10 hours of sleep. A sports science coordinator who used to train Navy SEALs is telling them what to do with their bodies. On top of all that and more, each player has a special smoothie waiting for him after practice.

It's so different, so curious. I don’t know what to make of it, but it’s intriguing enough to have a city and its fans sucked in. After last year’s monstrosity, it was safe to allow some time for a rebuild. Eagles fans aren’t exactly patient, but a year or two could be allowed in that instance.

However, the addition of Kelly throws that out the window. It’s out in Broad Street, and everyone is running over that idea. There’s an arrival of a new wave of excitement and anticipation. With it, some unreachable goals are probably close behind. Or maybe – just maybe – Kelly can be the magician we’ve all made him out to be. If not for any other reason than we’re Eagles fans and always desperate for something or someone to fully believe in.

There will be more fanfare for a team coming off a 4-12 season than ever seen before. What kind of plays will he run? More importantly, how many plays will he run? Can he make the line between college and pro strategies nearly vanish? If he does, will he spark a trend or is he the only one capable? What makes him so capable?

Is Chip Kelly the last great hope or just another guy who is going to try his hand in the pros and fail? That’s the question we all want to see answered. It just so happens that most of those who want to see him succeed are Eagles fans and the others probably wouldn’t mind if he failed.

The droves of fans in their green and black and white will watch on NFL Draft night, hoping for someone who likely won’t come. It could be anyone at this point, and there’s no telling what this new guy will do. At least with Reid, we knew what to expect. Now, we can expect to go all-in with Chip’s pick even if it’s not who we wanted.

We’re in the dark. We sit here with this dream that is yet to come true and a cynicism that can only be found in our kind. With hopes of good things, we watch Chip laugh and shoot back questions at reporters to protect his secret society inside the NovaCare Complex doors.

If it flops, his responses will quickly wear thin. The new gimmicks will go down on a long list of things that drove us up the wall.

From the desk of this Eagles fan, I type with full confidence. I can reiterate that I’m excited for this new, fantastically different era we’re about to start. I continue to take a slug of my kool aid.

I just hope all my wishes for something different didn’t go into an overflow account that brought about something too different. The only way to know if it went too far is how well the team does.

For some reason, my track record doesn’t let me think that something positive will come from an appraisal of Philadelphia Eagles results.