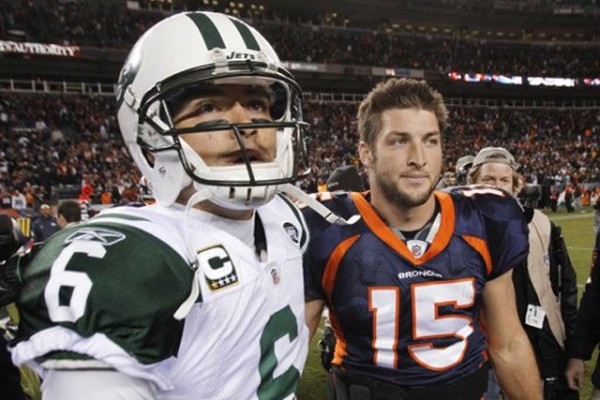 It seems Tim Tebow garners the entire craze these days. When every play you run in OTAs gets publicly tweeted and several people are following, you know that you have officially arrived. Why all the love for a backup quarterback? Why all the hype over a quarterback that really hasn’t done anything of significance to warrant the attention he’s getting just yet?

Is it because he brought his team back to win a football game or two? Honestly, he’s not the first and he won’t be the last to have a few comeback victories, but why are people so polarized by Tim Tebow? Many well-known quarterbacks have done the same with less attention.

The Tebow hype started at the University of Florida. It’s not a well-kept secret that Florida and Texas are the holy grails of high school football. Any time one of their own goes on to have success, then it make for a polarizing case to explore their greatness, because their image will sell, as long as it is squeaky-clean.

That doesn’t completely explain Tebowmania. In fact, it would only make sense if those who came before him had similar accolades. As a matter of fact, you can argue that Vince Young and even Danny Wuerffel should have had similar attention coming out of college.

Let’s try and capture the dynamics of what makes him so polarizing:

1. Tim Tebow is a Christian

Some would argue that it is because Tebow is a Christian, but so is Andy Dalton who, as a rookie in Cincinnati, has better stats in the NFL in his rookie season than Tim Tebow has had his whole NFL career.

You may want to argue with this one; I surely don’t, but this is what I do know. If a woman knows that you are pure and she has a chance to baptize you, she knows that she can definitely be the one. You immediately become everyone’s target. Mothers want their sons to be like you and their daughters to be with you.

3. Tim Tebow is a winner

We have seen all the speeches from college and we have even seen the plaque to commemorate the greatness of Tim Tebow at Florida. We even witnessed the run to the playoffs last season, but we have seen that from other great players, and they weren’t given the key to the city with zero accomplishments. If you compare his first two seasons to Big Ben Roethlisberger’s first two seasons, there is really no comparison. Several quarterbacks have outplayed Tebow, but none have been as polarizing.

No, all the man does when he does something well is pray and praise God. The kneeling down where it seems he is praying (aka Tebowing) has made him larger than life. A man who puts God first when he could be claiming victory for himself makes him a hero. However, Reggie White did it; Rocket Ismail did it. Several others did it… So weren’t they revered for it?

I repeat… FOOTBALL PLAYER… not a quarterback. His quarterback skills are below par, but his football I.Q. is off the charts. Is he worthy of all the praise he gets? Probably not, but he is America’s darling and you can’t question his ability to play and understand the game. He just happens to play a position where a lot is required.

You may or may not agree with the hype machine, but it is what it is. The only thing that can possibly kill Tebowmania is scandal. Whether he wins or loses games will not matter anymore, because he is America’s darling. Right now, he gets the Brett Favre treatment. Let’s just hope he doesn’t get a sexting scandal anytime soon or Tebowmania will be exposed.

3 Replies to “Breaking Down The Fascination With Tim Tebow”