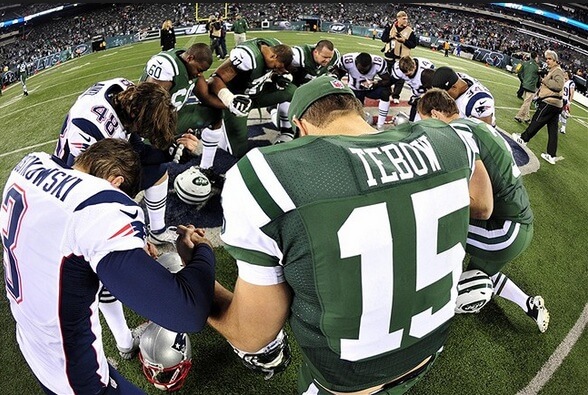 It had to end like this. There was no other way. Somewhere in the sports history books, there would be a footnote about Tim Tebow on the Patriots. It seemed too obvious to overlook, too real to dance away in the wind.

The union is finally consummated. Recent reports told us that Bill Belichick hated Tebow as a football player. More recent reports involved a denial from Belichick. In the end, the polarizing sub-star heads to Foxboro, MA.

While we see whose eyeballs can roll fastest, entertainment value goes up. Yes, we all think that First Take on ESPN now has an offseason’s worth of topics. As if we needed more reason to hold intervention for its viewers.

Can we wait for this? Can we wait for the moment when Tebow lavishes his new coach with compliments? Can we hear him now, with his praise of what a great football mind Belichick is? The tantalizing irony of it all. You know, Tim, your coach is a known cheater. He also has no love for his neighboring coaches as himself. Will your staunch religious beliefs prevent the paychecks?

How fantastic this connection will be. A man regarded as the football devil himself and his new saint. These storylines will play more than Tebow. The production value in this new arrangement is too pure, too rich and too funny to pass up.

Rarely have we seen a big-name player on the top of a trash heap that Belichick won’t offer his outstretched hand. He thinks he can make something out of Tebow – or at least thinks he can try. While he’s been right before, we’ve seen enough of the number 15 (now 5) to know what’s coming. Soon we’ll find out if you actually can make chicken salad.

Of course, the point could all be moot when the quarter(full)back is released in training camp. Then, we’ll know the exact shelf life of Tebow’s NFL career has officially run out. For the millions of you waiting for that day, you will embrace your fellow man with open arms.

A player without a position and a coach who figures he can create positions – it’s worked before. This last straw will be interesting to watch, but how can we begin to guess how Tebow will be deployed? Belichick may have outsmarted himself once and for all. In the end, will it matter?

After all, it’s just a contract. We know how much that means in the NFL.

At the very least, this will provide those who hate the Patriots (most people) and those who hate Tebow (probably many of the same, but many just the same). There will be no better trend than rooting against New England. Really, that’s all that matters. Fans will unite and shout their displeasure and complaints from the mountaintops. How glorious. Hark, the herald angry fans sing! Glory to you, the newborn disdain!

When it comes down to x’s and o’s and jimmies and joes, this move deserves no analysis. If the kid plays, he plays. Good luck, Belichick. Good luck, Tebow.

It won’t matter much on the field. But, when it comes to Tim Tebow, it rarely does anymore. Instead, he brings a topic to the water cooler like Belichick does. Now, the two are united, and if we think long and hard about it, would we want it any other way?

4 Replies to “Belichick And Tebow: A Match Made In Heaven And Hell”