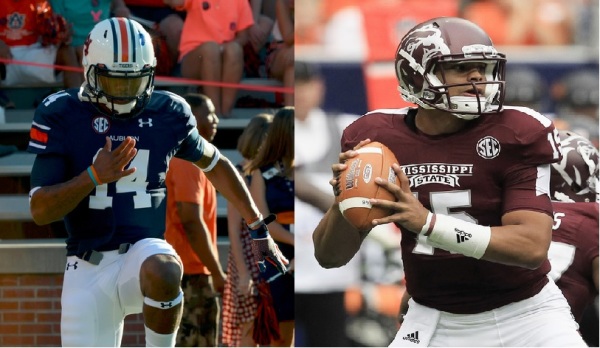 Imitation is the greatest form of flattery. College football is a trendy sport, and many times we see a team come up with an innovative approach and garner some success in the process. Then the following season you see teams mimicking what that squad did or calibrating their approaches to simulate a variation of the successful endeavor.

The game of the week features two innovative teams and should prove to be a clash that will better define who the SEC West Champion could possibly be, although it’s probably going to come down to the final game of the season regardless of the outcome of this game.

The Auburn Tigers are the next big-time team to enter the state of Mississippi with a winning streak and a number 2 ranking in the country. The only difference is they are headed to play Mississippi State, who last week ran roughshod all over Texas A&M. The Tigers' philosophy has changed so much since last season’s success. Last year they beat you in the ground with a running attack that would just put more points on the board than most teams could muster up against them. This year, they do more of the same, but they have a defense that is capable of stopping any and every team they face.

The Tigers come into Starkville featuring a potent offense led by senior quarterback Nick Marshall. Marshall has nearly 800 passing yards and almost 400 yards rushing on the season. He has improved in almost every category since last season and has his team thriving at the halfway point in the year. Marshall’s progression as a passer has helped the Tigers become more balanced, but they still lean heavily on their backfield. Senior running back Cameron Artis-Payne has nearly 600 yards rushing on the season while averaging a little over 5.4 yards per carry.

The Auburn defense is much better than last season, but it hasn’t seen an offense this season like the one it will face in Starkville on Saturday. Mississippi State has the hottest quarterback in the country on its side, and Dak Prescott is living up to the hype bestowed on him. Prescott has 1,232 yards passing and 13 touchdown passes on the season. He also gets it done on the ground, amassing 455 yards rushing and another six touchdowns to boot. Prescott is a big, strong, physical quarterback. It almost looks as if the Bulldogs decided to follow Auburn's blueprint during the Cam Newton era and get themselves a big quarterback who can beat you with his arm and his legs.

When we look at the tale of the tape, you can see right away that these two teams are both physical football squads. Auburn has the advantage up front with a huge offensive line. They are like a bunch of tractors set up to clear out whatever is in their way. The Bulldogs feature size and speed up front. They are more agile, but they are also big enough to offer up a few problems for the Tigers.

This game will be a chess match. The coaches will have to make some decisions early on that will either create rhythm or disrupt their chances of winning this ballgame. Auburn has played in more big contests to date with the roster that it has intact so I am going to give the Tigers a slight edge in this one. I think Mississippi State has the better team, but Auburn has been battle-tested and I believe that Mississippi State may have used a bit too much in its home win last week against Texas A&M.

It should be a good contest, and if either defense can find a way to get off the field on third down, it will do something to these offenses that hasn’t been done all year. The sad thing is that one of these teams has to lose. The SEC West is so dominant this season. Every week from this point on should be epic in so many ways. There is a really good chance that the teams in this division may legitimately end up knocking each other out of the four-team playoff because they are all that good. If it does happen, they should consider forming their own playoff among each other.

As much as I hate to say it, it may be more entertaining than the national championship we would get if they aren’t in contention.